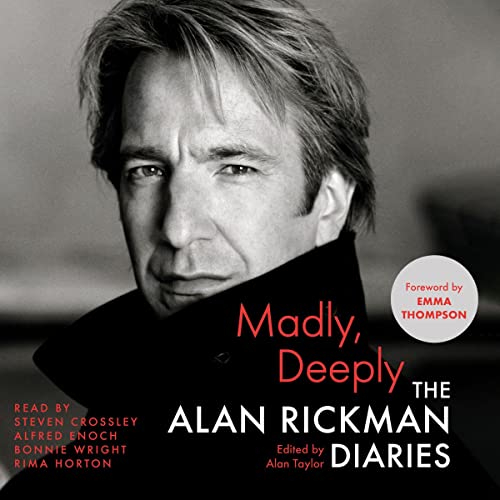 Alan Rickman was one of the world-class actors of his generation, as well as a tireless political activist, an avid traveller and a devoted confidant and friend. Through his never-before-seen diaries—a twenty-five-year passion project—Rickman invites listeners backstage and into his life.

Alan Rickman remains one of the most beloved actors of all time across almost every genre, from his breakout role as Die Hard’s villainous Hans Gruber to his heart-wrenching run as Professor Severus Snape, and beyond. His air of dignity, his sonorous voice and the knowing wit he brought to each role continue to captivate new audiences today. But Rickman’s artistry wasn’t confined to just his performances. Rickman’s writing details the extraordinary and the ordinary in a way that is anecdotal, indiscreet, witty, gossipy and utterly candid. He takes us behind the scenes on films and plays ranging from Sense & Sensibility, the Harry Potter series, Private Lives, My Name Is Rachel Corrie and many more.

The diaries run from 1993 to his death in 2016 and offer insight into both a public and private life. Here is Rickman the consummate professional actor, but also the friend, the traveller, the fan, the director, the enthusiast: in short, the real Alan Rickman. Here is a life fully lived, all detailed in intimate and characteristically plain-spoken prose. Reading the diaries is like listening to Rickman chatting to a close friend.

Madly, Deeply also includes a foreword by Emma Thompson and a selection of Rickman’s early diaries, dating from 1974 to 1982, when his acting life first began.

What listeners say about Madly, Deeply

Was looking forward to this but, even if the content had been riveting instead of boring, I couldn’t stand the terrible, truly awful narration - the male narrator sounds as if he’s doing cheesy advert voiceovers - hammy, weird inflection in all the wrong places - how anyone could think he was a suitable narrator of an audiobook is baffling.

Love Alan Rickman and was hoping for a witty and revealing account of his life. This is so boring. One line mostly for each date, usually mentioning people I'd never heard of, or often by just their nickname. It may improve but I couldn't be bothered to listen to any more.
Hoping to get a refund but it's increasingly harder to do this.

I'll start by saying I never read diaries or autobiographies, they are just not my bag. However, Alan is/was my all time favourite actor and I just had to read this. I actually listened on audible (so I could listen at work), and it was just wonderful. The narrators were all very good, I love how they used two of the stars from Harry Potter! I guess I'm left wanting more ie more info on Potter and his other films especially,but these diaries are really snippets of his daily journal so were never going to be detailed like that. I've laughed, I've cried and I love him even more than I did. Yes he's a bit cantankerous and yes he's pretty opinionated but no, he's never rude or disrespectful. Quite frankly, he's such a loyal friend and partner, more fun loving than I ever realised, dealt with more tragedy than I knew and saw more of the world than can ever be put into a diary. Left me wanting more and more which will unfortunately never be. RIP Alan .

I loved Alan Rickman and was so looking forward to this but giving up 3 chapters in. The narrator makes this such hard work - totally wrong choice.

This is one book which is probably better in written form. As a diary it darts about and while the content is extensive and lots of pockets of interesting bits it’s just so hard to follow. What a shame.

It is said that you should not meet your heroes and I think perhaps the same should be said of reading their diaries (or listening to them).
I have long been a fan of Alan’s work, and admired what I believed to be his warm heart as well as his incredible talent. I accept that these diaries are more jottings about his day, however he comes across as hugely critical of everyone and everything, including himself. His notes and criticisms have made me reassess his performance in some of my favourite films, given his negative views about other actors, directors and the end product. It could be said that these were private musings and therefore did not need to be full or even positive, but then why publish them?
All in all, I am left with the view that he was, after all, just a person like any other and my memory of him would have been richer had I not read this.

I had pre ordered this and enjoyed it immensely. I would have preferred the earlier, more random diary entries from his younger life put at the beginning though. it felt like a bit of a disjointed latch on to place them almost at the end. I can highly recommend this audio book and its a definite reread for me!

I love Rickman’s work but this is read by a person who mispronounces so many words, and whose tone does not capture Rickman’s brilliance at all. Content- wise, there are so many names dropped that it will only appeal to those who recognise the characters. There are many mentions of shared meals but limited insight into characters (apart from those deemed by Alan to be open, kind and funny). I would have liked to understand more about his non- theatrical life and marriage.

If like other people's diaries and you like Alan Rickman, then this is the book for you. Just remin yourself throughout that you're not listening to Alan Bennett and you'll be fine.

I was so excited to listen to this, not having the time to read it first hand. What a disappointment !! Hours of what I would imagine someone's Outlook calendar would sound like if read out loud. Brilliant if you need a hand falling asleep, avoid if driving or operating heavy machinery.

What a privilege to be able to listen to these very personal commentaries. Thank you to all who made it possible