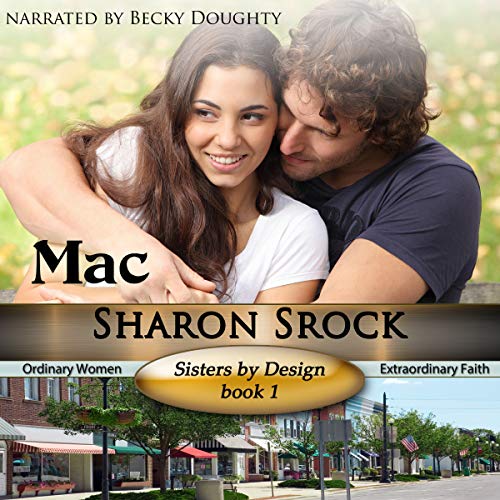 By: Sharon Srock
Narrated by: Becky Doughty
Try for £0.00

After separating herself from the oppressive cult where she was raised, Mackenzie Soeurs has two dreams: to give her son Riley a better life than she had, and to live in peace, as far from the harsh God of her past as she can get. At least that was the plan until her son got hauled to jail for theft and she lost the mother she never truly understood. In the darkest moments of her life, Mac finds herself surrounded by a group of Christian women she can't understand and a handsome man willing to take her son under his wing.

Dane Cooper, Garfield's former bad boy and groom left at the altar, can't deny his initial attraction to Mackenzie. Neither can he resist the urge from God to mentor her delinquent son. How can he guard his battered heart and still give Riley the same second chance he was given?

When Jesse, Charley, Randy, and Alex signed up for Mac's first fitness class, they were looking for someone to whip them into physical shape. What they found was a woman bound by a cruel history, suffering through a tragic present, and in desperate need of a friend...or four.

What listeners say about Mac

A sweet Christian romance. It is very easy to get into all the characters and you are soon voting for them to succeed. I thought the narrator's voice was perfect for the story. She made it easy to visualise a small town and a group of good friends. Totally recommended.

A Love-Shy Guy, A Single Mom and a Troubled Teen

I enjoyed this sweet love story about a widowed mother of a teenage son who leaves the cult community where she was raised when her husband dies and sets out to make a new life for herself and her son in mainstream America.
It's well written and engaging, dealing with the kinds of challenges that plague so many American families. The hero is a strong, sensitive type and a convincing mentor for the troubled teenage son. The heroine is strong and smart but badly lacking in confidence after a lifetime in a chauvinistic and repressive religious community, and watching her grow as she finds her way in her new life is heartwarming.
This IS a Christian story and the characters relationship with their faith is a critical part of the story, and that's fine, but I did find the talking God element a bit over the top. On the other hand, in a world of literature where the devil wears designer clothes and the old gods regularly come down from Valhalla and Olympus to meddle in the love of ordinary mortals, a Christian God who actually talks to people really isn't all that strange.

Good portrayal of living in and the ways of a cult. Leaving the cult after her husband dies is a big under taking. She is surrounded by strong Christian woman that want to help her. With a mother and her son, it is hard as this book shows. With faith and friends to help her and her son. Given audio for my voluntary review

Wonderful book about conquering adversity and the power of faith and friendship. Also, a little romance thrown in.

Mac totally has to reinvent her life

Fun book about Mac, her teenage son Riley and their escape from a very strict religious cult after the death of her husband. They move to Garfield on a whim along with her very antagonist mom. She goes to school and opens a nail salon and exercise gym. She’s juggling everything and all is going well except Riley who’s struggling with school and friends. She meets the local handyman and his sister and her friends. Everything with Riley goes south in one week and these new friends in her life help her overcome all. Her beliefs about God and the Bible are heavily tainted and skewed by the cult she grew up in and she’s promised herself she will never get involved with religion or God or the Bible again. Between her new friends and experiences and discovering a very different God than she was raised with, Mac can truly live again. Oh and there’s that handsome handyman causing heart thumps and goosebumps. Very much a Christian theme and lots of Bible references but it was to counter all the misinformation she had lived with her whole life.

A Good Book About Strong Women

This book was my first by Sharon Stock. I can say it will not be my last. At first I was Confused by the title of the book, Mac. I found this book to be very well written. With an audio book the narration can make or break a book. I totally enjoyed the narration. I felt it really added to the story.

Great story. And what a range of voices/tones for the different characters the narrator presents us with. I do have well over a dozen audiobooks read by Becky and love (!) listening to her - over and over again. I might be biased but here’s another truly a delightful performance - of a truly beautifully!!!!!! written story.

Maggie was raised in a cult based on a skewed, harsh form of Christianity. So when she escaped she was revolted by new acquaintances with open Protestant Christianity. Yet, facing too many crises occurring and without many of the tools to handle them in her new environment of freedom, a number of acquaintances step in to hold her up. This book demonstrates how loving Christians can be instruments in the God’s hands. It also shows insights into cult mind control. Worth a read.

The summary seemed interesting, but I wasn’t sure what to expect. I discovered a wonderful story which shows the loving, caring, and forgiving God. It also showed the dangers of ignoring the Bible and creating a warped religion based on hate and and dominance over certain people.
It was interesting following Mac and her discovery of the Bible and that God truly loved the world when He sent his only Son to teach us, heal us, and reverse death! Most of all, Christ allied Himself to be killed and to take on all the sins of us Humans. And most important to rise on the third day!
The book also had laugh out loud moments of comic relief.
I highly recommend this book!

I’d read this one.

I’m not a Christian but enjoy Christian literature as an inspirational read. This one has several of the elements that are a theme in the genre but I liked the way it was told. Also it has at its center someone who was raised around abuse called Christianity and that reminds us that we need to think past what we are told. I was annoyed at idea that teaching a woman to think for herself was told with a man raising her kid better than she could, and a group of women who told her how to think while three lives are transformed in 8 days. So marks off for that.
I would enjoy reading this book though and recommend it as inspiration for anyone starting a new adventure in life. I don’t recommend the audio at all though. The narration is done in a snarky kind of voice that seems to either be making fun of the subject matter or the author’s words. Maybe both. Either way it ruins what is otherwise a solid 4 stars with its insincerity.