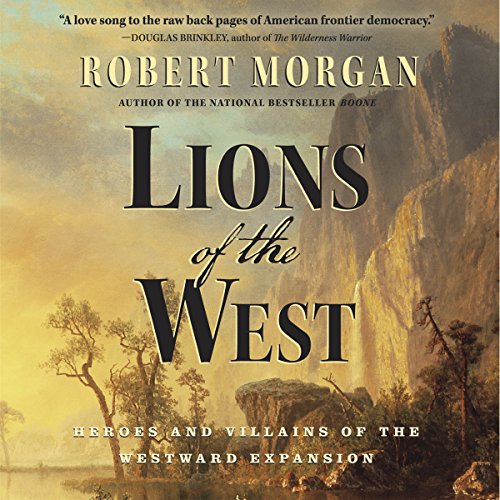 Lions of the West

By: Robert Morgan
Narrated by: David Drummond
Try for £0.00

Thomas Jefferson, a naturalist and visionary, dreamed that the United States would stretch across the continent from ocean to ocean. The account of how that dream became reality unfolds in the stories of Jefferson and nine other Americans whose adventurous spirits and lust for land pushed the westward boundaries: Andrew Jackson, John “Johnny Appleseed” Chapman, David Crockett, Sam Houston, James K. Polk, Winfield Scott, Kit Carson, Nicholas Trist, and John Quincy Adams. Their tenacity was matched only by that of their enemies: the Mexican army under Santa Anna at the Alamo, the Comanche and Apache Indians, and the forbidding geography itself.

Known also for his powerful fiction (Gap Creek, The Truest Pleasure, Brave Enemies), Morgan uses his skill at characterization to give life to the personalities of these ten Americans without whom the United States might well have ended at the Arkansas border. Their stories - and those of the nameless thousands who risked their lives to settle on the frontier, displacing thousands of Native Americans - form an extraordinary chapter in American history that led directly to the cataclysm of the Civil War.

What listeners say about Lions of the West

a really well written history of a little known (at least to me) part of US history. The narration is good and the story links well, moving focus between different key people but always linking back in. Strongly recommended!

Some chapters very enjoyable. I loved the chapters about johnny appleseed, kit carson and davey crocket, great! I thought there was too much info regarding the presidents and way too much on diff battles with mexico.

Informative about early American history and how the borders were expanded and set. Let's you get a feel for the men and their personalities, that had power and authority over the expansion itself.

A detailed collection of events and history makers regarding the U.S. expansion from D.C. westward
Some Chapters get bogged down in the details that will have some skipping along the chapters. For me, I learned about regional settlements in and around the variety of cities I have lived.
While an educating read, it is not for everyone.

History can be fun

yes, very interesting and fun to listen to. a lot of information

Have you listened to any of David Drummond’s other performances before? How does this one compare?

Would you listen to Lions of the West again? Why?

Yes. A lot of new insight on some of America's most loved pioneers

As a Tennessean, I loved listening about some of our favorite sons. Davy Crockett , Sam Houston etc.