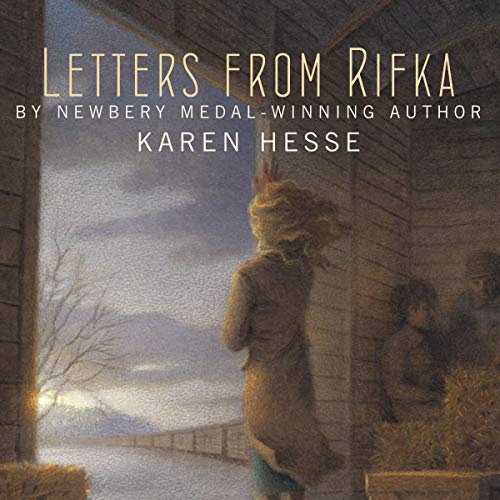 By: Karen Hesse
Narrated by: Angela Dawe
Try for £0.00

Rifka knows nothing about America when she flees from Russia with her family in 1919. But she dreams that in the new country she will at last be safe from the Russian soldiers and their harsh treatment of the Jews. Throughout her journey, Rifka carries with her a cherished volume of poetry by Alexander Pushkin. In it, she records her observations and experiences in the form of letters to Tovah, the beloved cousin she has left behind.

Strong-hearted and determined, Rifka must endure a great deal: humiliating examinations by doctors and soldiers, deadly typhus, separation from all she has ever known and loved, murderous storms at sea, detainment on Ellis Island - and is if this is not enough, the loss of her glorious golden hair.

Based on a true story from the author's family, Letters from Rifka presents a real-life heroine with an uncommon courage and unsinkable spirit.

What listeners say about Letters from Rifka

Not my favorite but worth the read.

Quick read, good story about immigration. Not my typical choice of genre, I read it for assignment.

Wonderful and easy to understand for children

A beautiful piece of history written in a way younger children can understand. A must read!!

this book is so good. I have read it many times. the narrorator did a great job!

Karen Hesse’s inspirational story is brought to life by the touching narration. Of Angela Dawe.

I read this book 20 years ago and decided to read it again. I enjoyed it just as much the second time and probably appreciated it even more. Letters from Rifka truly is a must read!

Bought this book to go along with the American Girl Doll book series Rebecca. It tied in wonderfully. My 10 & 7 year old really enjoyed it as did I!

Great use of words and emotion. Very good book. Gives you a great perspective of what it was like back then