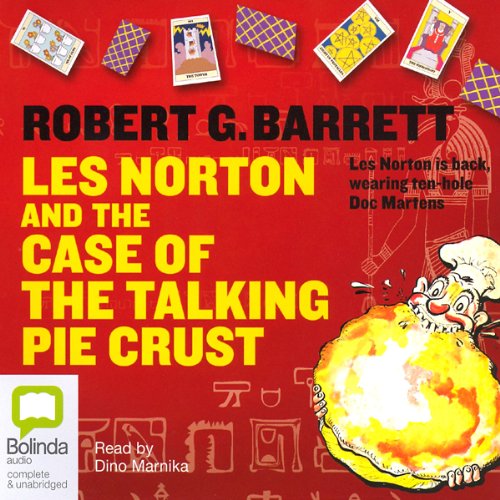 Les Norton and the Case of the Talking Pie Crust

Set in Bondi and Terrigal, Robert G. Barrett's latest Les Norton adventure, The Case of the Talking Pie Crust, is vintage Les Norton doing exactly what he does best: his worst. And proves once again why Robert G. Barrett is, according to the Australian, the king of popular fiction.

Les is quite happy resting up after the flu when Warren has to tip him into an earn. Norton's mate from the Albanian Mafia, Bodene Menjou, is planning to make the most politically correct movie ever made in Australia, Gone With the Willy Willy, and has a script stolen. If Les can find it, a lazy $50,000 could fall in. How can Norton say no?

After almost getting his head blown off in a drug lab, being attacked by crazed women with broomsticks, and beaten up by monstrous drag queens, Les is wondering if it is all worth it. The trip to Terrigal and the magical Mystery tour with Marla is good. And Topaz with her chicken soup is an unexpected delight. But apart from that, Les doesn't find much joy at all in his search for the missing film script. Especially not trapped in a fight for his life with a sadistic giant, where only one thing can save him: the Mongolian Death Lock.

Les Norton and the Case of the Talking Pie Crust