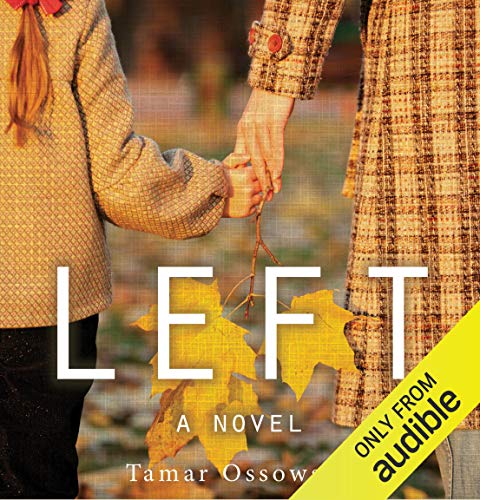 A mother must make the tremendously difficult decision to run away with one daughter while leaving her autistic daughter behind. Tamar Ossowski crafts a haunting story, told from the sisters' alternating perspectives, about love, loss, and family. The performances particularly stand out. The three audio artists prove to be talented actors, capturing each character's unique voice. This task is not an easy one, as the point of view shifts around, from desperate, to loving, to childish, to wise. Together, these performers make Left: A Novel jump off the page. Listeners will be carried away by the emotional whirlwind of these characters' lives.

Therese Wolley is a mother who has made a promise. She works as a secretary, shops for groceries on Saturdays, and takes care of her two girls. She doesn’t dwell on the fact that her girls are fatherless, mostly because her own father abandoned her before she was born and she has done just fine without him.

Even though her older daughter regularly wakes with nightmares and her younger one whispers letters under her breath, she doesn't shift from her resolve that everything will be fine. She promises... and they believe.

Until the morning an obituary in the newspaper changes everything. Therese immediately knows what she has to do. She cannot delay what she has planned, and she cannot find the words to explain her heartbreaking decision to her daughters. She considers her responsibilities, her girls, and her promise. Then she does the only thing that any real mother would do. She goes on the run with one daughter... and abandons the other.

Left is told from the perspectives of Franny, the autistic sister who is left behind; Matilda, the troubled older sister who vows to go back and save her; and Therese, a mother on the run.

What listeners say about Left

Generally I liked this and "got into" it quicker than I normally do. The general storyline was promising and I felt the emotions. However, for me, I feel that the ending lacked something; though I'm not sure entirely what. I think maybe it felt a bit rushed? Maybe it's just me? Good all round.

This Is one of the weirdest books I've ever listened to or read. Not in a fascinating or intriguing way but in a manner that makes me wonder what the author was thinking when they wove the story together. It was extremely hard to follow and, even though I stuck it out until the end, I don't understand much of what happened in the book. The way the characters stories weave in and out of one another is difficult to track. Maybe it would have been better if I was reading it myself. The narration was good but I, unfortunately, cannot recommend as an audio book.

Kept me guessing until the end!

The imagery was really vivid. I enjoyed also that there were three narrators. I glad I stumbled upon this book.

What made the experience of listening to Left the most enjoyable?

The diversity of the characters, but different readers, always a plus

What was one of the most memorable moments of Left?

Realizing the relationship between all the characters

This was a beautiful story of love ans pain. I think the writer did a wonderful job of intertwining the stories and bringing in an unanticipated twist.

I liked how it was written and how each person has their own story .. But you got to be not interrupted or you will miss something .. thank god for rewind .. but it kept my interest throughout

can't seem to finish it

didn't hold my attention. started ok then I got lost in the dialog. twice.

Could Not Get Through This Book

I could not get through this book, narrator was horrible. The monotone voice did not hold my interest at all.

This book had a great narrator and and a shaky plot. Which I can deal with. But the ending does not resolve any issues on the book. That I can not deal with

awful narrators for the kids

franny's voice is almost a sickly sweet whisper
and Matilda is monotone. who picked these people?

the story itself verges on ridiculous. the magic of "sparking" was introduced only to have therese refuse to use it in any helpful way. the "secrets" were totally pointless for two adult women to carry. the decision to "leave" Franny with a "stranger" was see through and just... dumb. the ending was so whirlwind with people happening to move across the state but right next door to the very people they didn't want to cross paths with? they lived there but NEVER saw each other until a fateful night *soft spoiler* where literally a lighting strikes the house TWICE and a tree falls on the bad guy who we only interact with once btw. but he's the reason this whole thing happened? ugh just sloppy writing that felt almost YA in it's approach but was so out of touch with how teenagers would behave that it definitely also ISN'T YA.
just bad y'all.