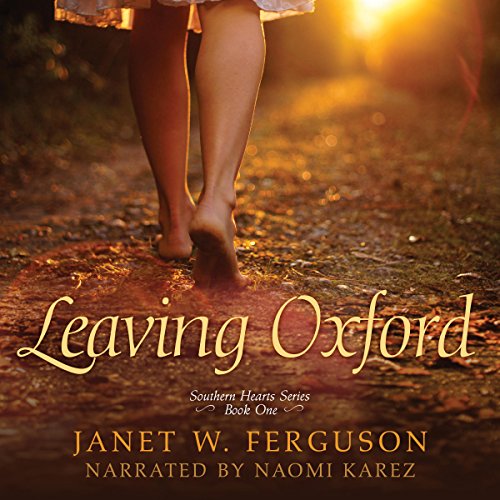 By: Janet W. Ferguson
Narrated by: Naomi Karez
Try for £0.00

Escaping home to Oxford, Mississippi, seemed like a good idea. Until it wasn't.

A year after a tragic accident in Los Angeles flipped her world upside down, advertising guru Sarah Beth LeClair is still hiding away in her charming hometown of Oxford, Mississippi. And she may well be stuck there forever. Suffering from panic attacks, she prays for healing. Instead, her answer comes in the form of an arrogant football coach and an ugly puppy.

Former celebrity college quarterback Jess McCoy dreamed of playing pro football. One freak hit destroyed his chances. Although he enjoys his work as the university's offensive coordinator, his aspirations have shifted to coaching at the highest level. His plans of moving up are finally coming together -- until he falls for a woman who won't leave town.

As the deadline for Jess's decision on his dream career looms, the bars around Sarah Beth's heart only grow stronger. But it's time to make a decision about leaving Oxford.

What listeners say about Leaving Oxford

If you could sum up Leaving Oxford in three words, what would they be?

Probably the best parts of the story are the parts where Sarah Beth influences other people to trust in God. I must say, though, that I really liked the setting. Janet W. Ferguson does a great job describing the Mississippi climate, with humidity that is "air you could wear." I've been to Mississippi a few times, and my husband interviewed for a job in Gulfport not long before Hurricane Katrina. I remember the area well, though I've never been to Oxford.

When a friend of Sarah Beth's gives their life to Christ.

I both laughed and cried. I am not a football fan, but I actually really liked the character of Jess, who is a college football coach and Sarah's close friend. Their romance was slow growing and realistic.

I normally veer away from strong Christian message novels, preferring instead novels with a Christian worldview. However, this one is worth making an exception for! Leaving Oxford is the story of a prodigal daughter who was raised in the church but went her own way during college. She realizes she needs God in her life, but living right after a long time of living wrong can turn one's life upside down. However, Sarah Beth LeClair is one determined woman, and she manages to show God's steadfast love to others, even when they don't understand her decisions.

The narrator was good. The only complaint I have is that her southern accent was not consistent. Sometimes it was light and sometimes strong in the same character. Sometimes -ing endings were enunciated, and sometimes the -g was dropped. For example, Sarah Beth says somethin' and workin' but also branding and blessing. Of course, I'm from Texas, and as I said those words out loud, I wasn't consistent either! So maybe it's pretty accurate after all.

I received a copy of Leaving Oxford from Janet W. Ferguson for free in exchange for an honest review. All opinions are my own.

A Breath of Fresh Air!

This is the first book I listen to by Janet Ferguson, and I was delighted! I hope she is writing more! It’s a book that brings all kinds of emotions and many people can relate to its characters and their experiences in life. Above all it gives you hope!!!

Naomi Kaez has a very pleasant and clear voice and her narration is excellent.

I received this audio-book free for an honest review by the author, narrator, or publisher. Thank you!!!

If you found this review helpful would you please take a moment to click yes below, thanks!

Leaving Oxford is an excellent production, both in terms of the story and the narration. Engaging and layered, the story held my interest from beginning to end and Naomi Karez's narration was smooth and easy to listen to. With plenty of emotion, romance, and depth present in this beautifully told tale, Karez provides a nuanced and believable narration for both male and female characters, which is no easy feat. I will be seeking out Janet W. Ferguson's backlist and highly anticipate future works from this narrator.

Where does Leaving Oxford rank among all the audiobooks you’ve listened to so far?

It is one of my favorites.

What was one of the most memorable moments of Leaving Oxford?

Well, I know for sure which moment was completely memorable and it made me gasp aloud...but that would be a major spoiler for me to write it out here.

Have you listened to any of Naomi Karez’s other performances before? How does this one compare?

I have not listened to any other books that she has narrated.

There were quite a few. That memorable moment that I referred to from above. And I loved the development of Sarah Beth and Jess' relationship.

This was a delight to listen to.

This was a well written, clean Christian book. The book was good and the narration was very well done. I was voluntarily provided this free review copy by the author, publisher or narrator.

I’ve always loved Oxford, MS and wanted to like this book! Oxford is a wonderful place and a book would be great written about living there. This book was all broken up with Bible quote thrown in it Willy Nilly! It made NO SENSE! If you want to read a book about Oxford, look elsewhere!

Christian propoganda at its worst

I could not finish this.... and it left me nauseous. I like a wholesome love story with a faith base but this is over the top distasteful cringey Christian evangelism at its complete worst and the lowest part is nothing alerted me in the book description or reviews in the first pages. It is so bad as to be totally offensive. Minus stars for dishonesty and disrespect.

The narrator did a good job with Leaving Oxford by Janet Ferguson. With a good clear voice, Naomi Karez reflected the action taking place. I enjoyed listening to this story during football season (although it can be read at any time of year). This contemporary romance is a fun listen with lessons of faith. I was given a copy of this audiobook. All opinions are my own.

Sweet story of faith and love

Leaving Oxford combines realistic characters facing difficult pasts with a layered plot of finding new faith and hope for the future. With a sweet, clean love story, Ferguson offers an endearing novel of dealing with anxiety, loss, and life’s troubles with a touch of humor and a lot of prayer.

What a wonderful sweet story! Not too sappy to be ridiculous and shows that God’s children have their troubles too