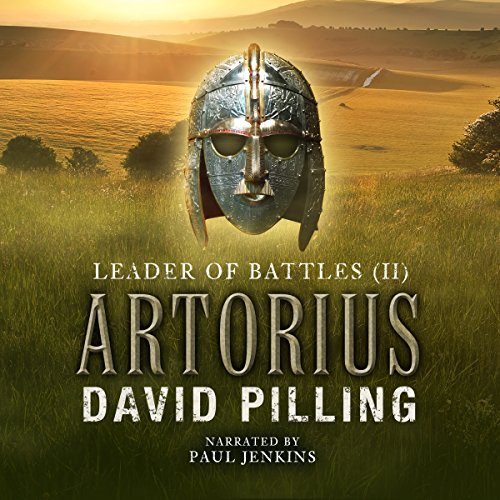 By: David Pilling
Narrated by: Paul Jenkins
Try for £0.00

"Beware the shadow, and the storm in the north...."

Britain, AD 470. Ambrosius Aurelanius, the defender of Britannia, is dead, murdered by the son of his greatest enemy. His successor, the heroic General Artorius, is meant to take the crown his predecessor refused and reign as High King. With the Saxons defeated, and the Picts and Scotti driven out, all is set for a golden age of peace and prosperity.

Artorius, however, chooses to step aside and allow another to seize power. The new king, Constantine, dispatches Artorius and his army across the sea to aid the Western Empire in her fight against the Visigoths. Betrayed on all sides, the general narrowly avoids death and returns home to disgrace and exile.

Now, reduced to a mercenary fighting the enemies of British kings, Artorius gathers a band of elite horsemen around him. As Britannia’s enemies slowly recover their strength and the realm slides back into darkness and ruin, he proves to be the only hope of his people. All the while, a terrifying new threat arises in the North, from the lands Artorius once called home....

Book two of the Leader of Battles trilogy chronicles the military exploits of Artorius, destined to be remembered as King Arthur, in the treacherous, crumbling world of sub-Roman Britannia, where every man was a potential enemy, and the sword ruled.

What listeners say about Leader of Battles (II): Artorius

David Pilling is a great historical novelist with a keen sense of detail and a gift for telling an old story in a new way. The period detail in his novels is quite accurate, and as a result his stories have a strong sense of place. I enjoyed traveling back to 5th century Britain and immersing myself in the world he created.

I listened to the first book of this series and enjoyed that one, so I expected to like this as well. I was not disappointed. My only criticism is that there were times when I was a bit put off by the narration, as it was somewhat nasally and the words seemed to be drawn out in strange ways. I did get used to this, however. The sample is quite representative of the rest of the book, so I suggest you listen to that and see if you like it.

I was given this book for free at my request and have voluntarily left this review.

He will be remembered as a king

One thing I appreciate is when an author takes an overused idea, and completely deconstructs the concept into somehting that is recognizable, but at the same time is completely and utterly new.

Pilling does that in this sweeping saga. He reimagines the Arthurian legends, but grounds it in a reality to such a point that this almost reads as if it were coming from Julius Caesar's Commentaries. You will, because of his attention to detail and depth of research, believe that every drop of blood listed in this book really fell. One almost feels as if Pillings is drawing on memories from a former life as he is so descriptive and accurate in his setting, characters, and the events that transpire therein.

Another bonus, he keeps some ythical aspects, but does not go into having an omnipotent Merlin. No, Morgannahas the ability to see in spite of th fact that she is bling, but that is about as magical as it gets. Again, this level of depth and believability is something that I rarely find in historical fiction. Pilling also has the ability to pen an exciting and action packed emotional saga.

Paul Jenkins really manages to take ahold of the material that Pilling has given him, and wrestled with it to a point that he has made it his own. His characterizations, pacing, and emotionaldsplays are real and you can feel every single bit of tension or emotion he relays.

This book continues the fine work that was started in the last novel, and sets us up for more in such a way that you will find yourself looking for when the next novel comes out.

Get this book, read it, love it.

Great story and a masterful work of Historical Fiction. Very well researched and put together with a wonderful story. Historical note at the end ties things up and gives prospective very nicely. Bernard Cornwell and his “Saxon Stories are very well done, and David Pilling should also be in the same conversations. This series should be required reading/listening before that series.

I am looking forward to finishing this one and reading/listening to more by this author.

I loved this book very much, the historical descriptions were fascinating and most interesting.
I really felt that I was part of the book itself.
5 are definitely bound

David Pilling has written a fresh take on the Arthurian legends. He is using the Welch texts as much of his source materials so it is an Arthur you may not have seen before.
I enjoyed the first book I received as a review copy so much that I used a credit for this one.
Paul Jenkins continues his excellent narration of the series.