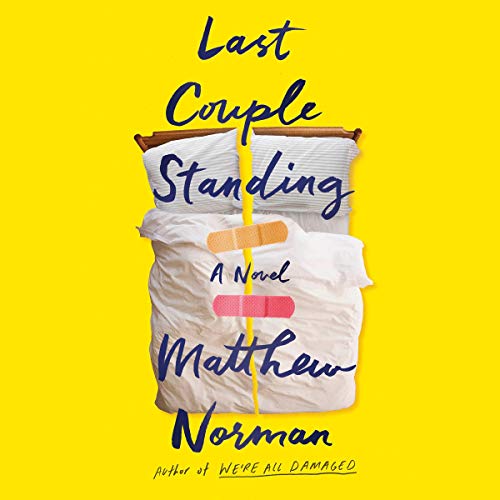 By: Matthew Norman
Narrated by: Kristen Sieh
Try for £0.00

A couple determined not to end up like their divorced friends try a radical experiment - and get in way over their heads - in this hilarious, heartfelt novel from the author of We’re All Damaged.

To maximize their chance at immunity, Jessica and Mitch try something radical. Their friends’ divorces mostly had to do with sex - having it, not having it, wanting to have it with other people - so they decide to relax a few things. Terms are discussed, conditions are made, and together the Butlers embark on the great experiment of taking their otherwise happy, functional marriage and breaking some very serious rules.

Jessica and Mitch are convinced they’ve hit upon the next evolution of marriage. But as lines are crossed and hot bartenders pursued, they each start to wonder if they’ve made a huge mistake. What follows is sexy, fun, painful, messy, and completely surprising to them both. Because sometimes doing something bad is the only way to get to the heart of what’s really good.

"In [Matthew] Norman’s funny and heartwarming novel...a Baltimore couple tries to head off the demise of their marriage with an unusual arrangement...Norman skillfully uses his gift for gentle humor to prod at the foibles and joys of marriage, parenthood, and love in this endearing charmer." (Publishers Weekly)

"This warm and witty tale of a devoted couple willing to throw out that pesky 'forsaking all others' rule in order to stay together crackles with fierce energy and emotional truth." (Judy Blundell, New York Times best-selling author of The High Season)

"Nothing is left off the table in Matthew Norman's Last Couple Standing, an equal-parts funny and heart-pinging novel that will be achingly relatable to both the married and the divorced - or to anyone who's ever contemplated being either. Norman's trademark humor and wit make this a page-turner you'll want to read with your funniest friend, then discuss over a couple of stiff martinis." (Sarah Jio, New York Times best-selling author of All the Flowers in Paris)

I want those 7 hrs of my life back

This story went downhill quickly a quarter of the way through. The narrator speaking as a child was annoying. The ending was absurd

Would make a nice rom-com, but book falls short.

The descriptions are nice and detailed, but the characters come off as overly simple, immature, and hard to relate to. The storyline is quite hard to get behind and lacks emotion, possibly why an on screen rendition would be better.

I wanted so badly for this book to get good. I found the characters charming and could relate to being married with married and divorced friends and children and all the other coupled stages of married life. Unfortunately, it continuously fell flat and I was able to predict everything right down to the anti-climactic chapters where it was all put together. Will try the author again because I think there is something there but, this wasn't it.

It's an entertaining train wreck to listen to.

I've listed and read all of Matthew Norman's books. Domestic Violets being his best, good characters and believable plot and ending. I find myself rereading it often. We're all damaged was ok. the ending was flat.

This book feels like a flipped version of Domestic Violets. But with an unrealistic plot and characters. I don't know if I'm supposed to hate the wife or just get the point that the human condition affects women too?

Even if you're an open-minded person, you know the ending just doesn't fit. I don't want to get more in detail without giving away the whole book. it's an entertaining listen, the narration is eh. Just don't wait for it to make sense or get tied up in a bow in the end.

I had been feeling a little brain dead from heavier reading and 2020 and wanted something light, fun and fast - like a summer beach read. I'm also a new mom in my late thirties so this really hit all the right buttons for me - aging, relationships, parenting, and sex. It's not as steamy as a romance novel, but is as uncomplicated as one and explores interesting area of relationships. It was nice to have the focus be on women in their forties (it is also clearly written from the female gaze). Yes, the ending is totally ludicrous, but it's all in good fun and honestly doesn't seem out of place for the fun tone of the book.

I needed to be reminded to see what o have right in front of me this year of turning 40 and realizing this happens to so many married couples. I loved this book.