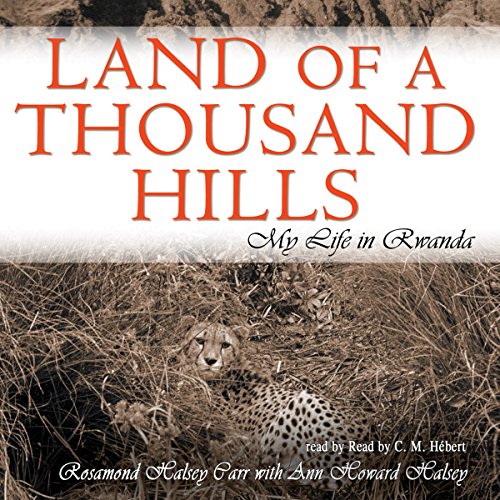 Land of a Thousand Hills

When Rosamond Halsey Carr first arrived in Africa, she didn't realize that she would spend the rest of her life there. As a young fashion illustrator living in New York City in the 1940s, she seemed the least likely candidate for such a life of adventure. But marriage to a hunter-explorer took her to what was then the Belgian Congo, and divorce left her determined to stay on in neighboring Rwanda as the manager of a flower plantation. In the ensuing half century she witnessed the fall of colonialism, the wars for independence, the loss of her friend, Dian Fossey, the relentless clashes of the Hutus and Tutsis, and, finally, 1994's horrific genocide, of which she provides an unparalleled first-hand account. This is the epic story of a woman alone in an exotic land, struggling to survive untold hardships only to emerge with an extraordinary love for her adopted country and its people.

What listeners say about Land of a Thousand Hills

What an inspiring story.
Beautifully read and written.
Such strong and determined people who saved and improved so many lives.

Another story from Africa. Gives insight to the conflicts of Rwanda and all the facets of emotions of being in the midst of such an amazing country. Fight of survival.
An easy listen. Excellent narrator.

It is shocking to read such an out of touch and oblivious account of Rwanda. Unless you are looking for a wealthy American plantation manager's perspective of Rwanda, I would not recommend.

Before this text, I had never read an account calling the Tutsi terrorists while claiming the Hutus were somehow victims. the glazing over of the use of the term "cockroaches" for Tutsi was shocking and the quick aside about the genocide (which was so awful for the author because she learned that people stole her fine China and silverware when she returned).

This book really showed me why people in Africa often distrust Americans.

Not to be forgotten

Having lived in Africa I love learning more about this continent full of mysteries and cultures to be encountered. This is the story of a very special woman who lived in Rwanda for decades and truly became part of it’s culture. She experienced part of the genocide and finds a way to tell the story that cannot be told because of it’s cruelty. For everyone who wants to know more about the background of the Rwanda of today this is a must read.

What an incredible woman!

This is a fascinating life story and a first person account of life in Rwanda through most of the 20th century.

This story was amazing. I was unfamiliar with the life of Ms. Carr. She lived such an incredible life. I learned so much about the History of Rwanda (both good and bad) and the surrounding area. I would highly recommend this book.

I love audiobooks, so I chose to read this book on Audible instead of purchasing a physical copy. I’ve considered a few times the physical copy may have been better. While the narration was very well done, it made me really sleepy!
The tone is relatively flat for the entirety of the reading. So just keep that in mind. The story is beautiful and very well told. There are a few audio problems, for example, there are several 30 seconds snippets that played twice back to back. Only one little snafu, or a few words were mixed up towards the end. Otherwise, the story is wonderful, the content, as far as I can tell, is excellent to learn more about Rwanda.

Great stories in general. However, the author should have recognized that they knew little about The history of Rwanda or Congo and the genocide against the Tutsi in particular. Her account of rwandan independance and congolese independance is also far from the truth. It particularly infuriating to label the hero of congo decolonization, Patrice Lumumba, as a bad guy because he wanted his country unified and free from belgian tyrany. Great work overall. RIP Rosy

the history of Rwanda through the most sensible and inteligent woman ever heard. beautiful

… And inspiring life… But unfortunately not a great listen. Tedious with minute details and less than riveting in the telling, one has to admire the author and her niece, however the book often reads like a Wikipedia page on Rwanda. Worth going through… if Only for the last scene with her family pets… But certainly not an enjoyable accompaniment to a weekend in the garden

This book is worth the time to read. Main character is a hero. inspiring story of her life in Rwanda, culminating in her ministry to the children following the genocide in 1994. Great insights into the life of an ex-pat chasing her dreams.

Enjoyed the entire audible book. Well written and very sad. If only there were peace on earth.