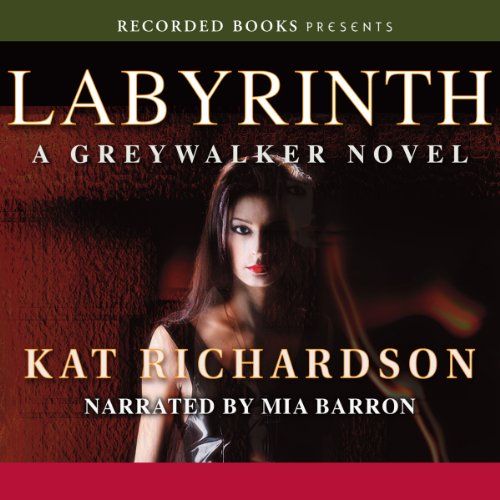 By: Kat Richardson
Narrated by: Mia Barron
Try for £0.00

Returning to Seattle from London following her last paranormal adventure, Harper is greeted with surprising news: The man who "killed” her has been murdered. His ghost could hold the key to valuable information about her father’s ghostly imprisonment and her own murky past, making Harper desperate to find him. Tracking this ghost down, however, puts Harper on a path fraught with supernatural dangers in addition to some corporeal ones—namely the police investigating her killer’s death. Meanwhile, a mysterious evil lurks in the shadows, manipulating Harper’s powers for his own dark schemes.

What listeners say about Labyrinth

Kat Richardson's Greywalker series is a wonderful concept, skillfully plotted and written. She gives a great idea of the atmosphere of Seattle (it is a rather...odd... city), and her heroine is always interesting and engaging. My favourite character has to be the ferret Chaos - Richardson obviously loves Mustela putorius furo, and that love comes over in her writing. I look forward to more of Harper and the Grey.

This is an incredibly good continuation of the series. It is a book that you find hard to put down. If listening to it, you find yourself captivated and drawn into the story.

The best one in the series so far

Would you listen to Labyrinth again? Why?

This one kept me interested and there were quite a few action bits in it. The story line went up a few levels on the previous ones. Not keen on the narrator though

Good Story that was poorly Narrated

Would you try another book from Kat Richardson and/or Mia Barron?

I have read the other books in this series by Kat Richarson and look forward to her next books.
I was not impressed with Mia Barro's narration. She did a good job capturing Harpers voice, but her male voices reminded me of voices that you hear with robots in cartoons.

The male characteristics were lacking an individual "voice" they all kind of sounded alike in pitch and tone. They sounded more automated (computer like). There was no real emotion brought forth with their voices. For some reason Carl's voice bothered me the most.