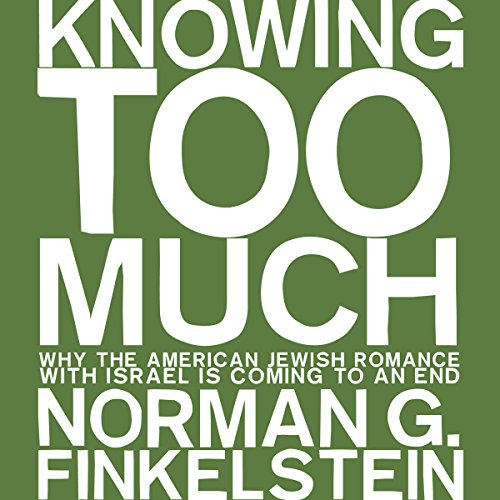 By: Norman G. Finkelstein
Narrated by: Tyler Crandall
Try for £0.00

Traditionally, American Jews have been broadly liberal in their political outlook; indeed African-Americans are the only ethnic group more likely to vote Democratic in US elections. Over the past half century, however, attitudes on one topic have stood in sharp contrast to this group's generally progressive stance: support for Israel.

Despite Israel's record of militarism, illegal settlements, and human rights violations, American Jews have, stretching back to the 1960s, remained largely steadfast supporters of the Jewish 'homeland'. But, as Norman Finkelstein explains in an elegantly-argued and richly-textured new book, this is now beginning to change.

Reports by Human Rights Watch, Amnesty International, and the United Nations, and books by commentators as prominent as President Jimmy Carter and as well-respected in the scholarly community as Stephen Walt, John Mearsheimer, and Peter Beinart, have increasingly pinpointed the fundamental illiberalism of the Israeli state. In the light of these exposes, the support of America Jews for Israel has begun to fray. This erosion has been particularly marked among younger members of the community. A 2010 Brandeis University poll found that only about one quarter of Jews aged under 40 today feel "very much" connected to Israel.

In successive chapters that combine Finkelstein's customary meticulous research with polemical brio, Knowing Too Much sets the work of defenders of Israel such as Jeffrey Goldberg, Michael Oren, Dennis Ross, and Benny Morris against the historical record, showing their claims to be increasingly tendentious. As growing numbers of American Jews come to see the speciousness of the arguments behind such apologias and recognize Israel's record as simply indefensible, Finkelstein points to the opening of new possibilities for political advancement in a region that for decades has been stuck fast in a gridlock of injustice and suffering.

What listeners say about Knowing Too Much

I'm 2 hours into this audio book right now. The content is interesting. However the narration is comically bad.

There have been so many mispronunciations of words that I've laughed and cried in equal measure.

This is a heavy subject with a huge amount of context, so having the narrator talk about "Eye-rinnians" (Iranians), "nuke-ular weapons" (I remember how the slow children at school were laughed at for saying nukeular) and "the lobby's raison de entree" (presumably raison d'etre), to give 3 quick examples, really does the book a disservice.

The only positive note about the narration is that he's not tried to get all emotive. But basically, the narrator isn't, in my opinion, up to the task of narrating this book if he consistently makes such glaring mistakes. Also, I don't know who quality checks audio books before releasing them, but surely they would have spotted all the cock-ups.

My advice to whichever company published this audio book would be to get a decent narrator and start again.

I'll carry on with the book and will put an accurate score for the content, but get the feeling that some of it is going to get through grated teeth because of the shoddy narration.

The book is informative, but the narrator's mispronouncing of even commonplace words is rather grating. The cadence is good, but the pronunciation is awful.

Good overview but narrator was terrible

Good overview of the salient points regarding the conflict.
the narrator should have made the effort to learn how to pronounce certain names and words correctly. very monotonous.

Would you consider the audio edition of Knowing Too Much to be better than the print version?

No. I found it very hard to listen to this without Normans voice behind it, in fact I scrapped the audio and read the book instead. I am a huge fan of Finkelstein and believe me, if you love his work you would know that it is nothing without his New York/ Yiddishy almost monosyllabic voice and tone .

What was one of the most memorable moments of Knowing Too Much?

The Narrators voice, it was awful .

The subject of the book is both important and interesting, the book itself well written. Unfortunately, this is marred by a reader who makes repetitive pronunciation errors which are quite inexcusable. It's too bad that this has happened.

You need a reader who can read properly!

What disappointed you about Knowing Too Much?

The reader mispronounced all of the big words. It wasn't an issue of an accent, because he pronounced easy words correctly. Someone needed to go through and pronounce words for him before he recorded this. And he butchered important names. The author must not have any control over the finished product, because if he did, he would surely insist on a new recording.

Absolutely nothing. Not only did he mispronounce words, it was obvious in some areas, based on his inflection, that he didn't understand what he was reading. I had to stop listening. It was just too frustrating.

What character would you cut from Knowing Too Much?

If I could get my money back for this audio book, I would.

Would you listen to Knowing Too Much again? Why?

I will keep the print version for reference, as it is an invaluable resource. Listening to the inept, ignorant narration is unbearable.

What was one of the most memorable moments of Knowing Too Much?

The entire book is revelatory of how the writing of Middle East history has been biased in favor of Israel, and how American Jews are becoming less supportive of the zionist state. It is meticulously documented.

As others have noted, the narrator appeared to have little ability to pronounce many common words that have more than 3 syllables, and even names well known from history
(Robert McNamara pronounced as MacNAMera) It's galling that Mr. Crandall had to have figured out he was in over his head with the subject AND vocabulary, but chose to produce shoddy work anyway. This important book really needs to be re-done.

I only continued to listen at all because of Professor Finkelstein's wonderful scholarship and writing.

Please right the wrong done to this fine book by re-releasing a well-narrated version.

Read this book; don't listen to it. I only kept listening because the content was fascinating and I couldn't stop laughing when the reader pronounced Edward Said "Edward Sed" and Menachem Begin with a "Begin" as in "beginning."

unfamiliar pronunciations made it a difficult listening. seems as the narrator heard different words in historical news reports

What made the experience of listening to Knowing Too Much the most enjoyable?

The book is well argued and important.

This was the most unprofessional reading I have ever heard. The reader mispronounced words and names on almost every page of the book.

New Narrator Please! Information too important for this idiot

Narrator needs pronunciation and enunciation lessons. Especially when it comes to historical figures but even mundane words like awry are too much for this guy.
Author is too intelligent and subject matter too important to be spoiled by this performance.

This is an authoritative, interesting and entertaining book describing a very controversial and current topic.

There are tons and tons of facts about great topics. However the reading is robotic and disengaging. It was hard for me to follow up during driving as usually do.