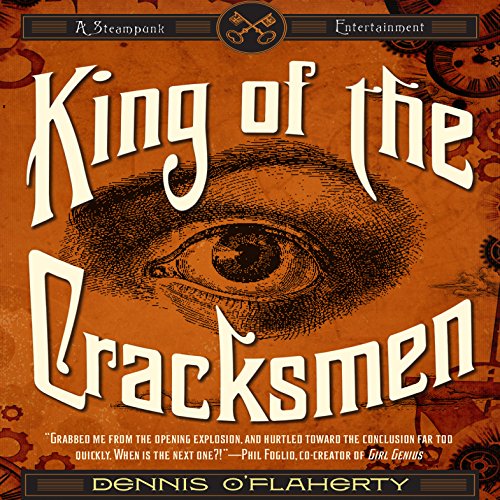 By: Dennis O'Flaherty
Narrated by: Daniel Thomas May
Try for £0.00

The year is 1877. Automatons and steam-powered dirigible gunships have transformed the nation in the aftermath of the Civil War. Everything on the other side of the Mississippi has been claimed for Russia. Lincoln is still president, having never been assassinated, but the former secretary of war Edwin Stanton is now the head of the Department of Public Safety, ruling with an iron fist as head of the country's military.

Liam McCool is a bad man, one of the best Irish cracksmen there is when it comes to robbery, cracking safes, and other sundry actives - until he was caught red-handed by Stanton. Those in the South who don't fit into Stanton's plans for the Reconstruction, and Stanton realizes Liam McCool is more useful doing his dirty work than sitting in a jail cell. But when his sweetheart Maggie turns up murdered, Liam McCool realizes he'll do anything, even if it means getting way over his head with bloodthirsty Russians, to solve the crime.

The King of the Cracksmen is an explosive, action-packed look at a Victorian empire that never was, part To Catch a Thief, part Little Big Man. It's steampunk like you've never seen it before, a murder mystery in a foreign world where no one is who they seem to be and danger lurks around every corner.

What listeners say about King of the Cracksmen

I loved so much about about the premise of this book. The characters, the cool era, the Irish accent of the protagonist… unfortunately I never really was able to get sucked in or lost in the world. I found myself starting and restarting chapters where my attention would drift a lot. Could be this was the 3rd 10+ hour novel I’d finished listening to in about 2 days.