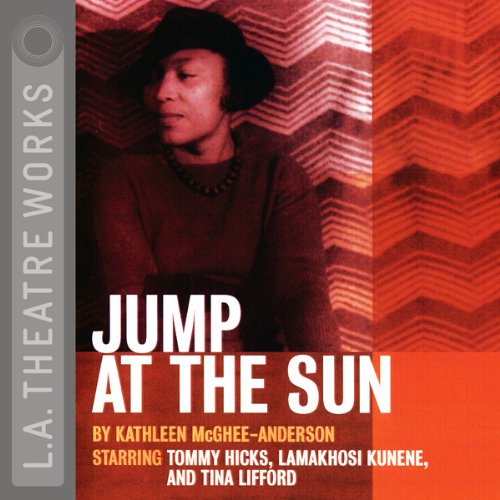 Jump at the Sun

By: Kathleen McGhee-Anderson
Narrated by: full cast
Try for £0.00

Award-winning writer Kathleen McGhee-Anderson's play chronicles the passions of Zora Neale Hurston, folklorist, anthropologist, and literary nova of the Harlem Renaissance. TV/film veterans Tommy Hicks, David Downing, and Tina Lifford (Parenthood), as Hurston, lead the multi-talented L.A. Theatre Works cast, who perform the life and loves of the barefoot girl who grew from making up tales about the simple life of the sharecropping south into the woman lionized as a uniquely fashionable individual, and one of the preeminent writers of 20th century African-American literature.

As the '20s roared and the Harlem renaissance thrived, a young woman from rural Florida became the toast of literary New York. Jump At The Sun chronicles the passionate life of Zora Neale Hurston (author of Their Eyes Are Watching God), who went from spinning tales on the front porch of a country store to writing prize-winning stories, novels, and plays. Imbued with the rhymes and rhythms of the Jazz Age, Hurston's story reveals a woman's ferocious appetite for life, literature, and love.

What listeners say about Jump at the Sun

What a fantastic autobiographical piece.
I must admit to being surprised by the ending.
The narrative was vivacious and I felt cheated when I came to the end so soon.
The author is nothing but, genius.
An honest portrayal of her roots I say.This is a very worthy listen.

I am still crying...

Those that got it, can't hide it

"Mama exhorted her children at every opportunity to 'jump at the sun.' We might not land on the sun, but at least we would get off the ground." from Zora Neale Hurston's 1942 autobiography, "Dust Tracks on a Road." "Jump at the Sun" is a wonderful title for this LA Theater Works play by Kathleen McGhee-Anderson and the 2008 Samuel D. Pollard documentary the play seems to have been developed from.

Zora Neale Hurston grew up "telling lies" to an appreciative audience in a small Black town in Florida. She was a story teller and, as an acclaimed anthropologist, a story collector and a folklorist. Zora Neale Hurston wasn't so much as in the right place at the right time as she created the right time and the right place - Harlem in the 1920's became the Harlem Renaissance. She was a contemporary of Langston Hughes (1902-1967), who is prominently featured in "Jump at the Moon." Hughes was more radicalized than Zora Neale Hurston, and probably looked down at her for being too ethnically black. She was exuberant and embraced Black culture, and that exuberance makes a great radio play performance.

LA Theater Works (latw dot org) has a great guide for teachers, and it's a good guide to start learning about that cultural era. The title of this review is a Zora Neale Hurston quote.

[If this review helped, please press YES. Thank you!]

I'm a complete sucker for a well-crafted, dramatic audio performance and this one was definitely worth the credit. The production quality was so brilliant that it seemed more like I was watching a play rather than simply listening to a performance. The cast of performers was truly outstanding.

My only complaint----not nearly long enough!