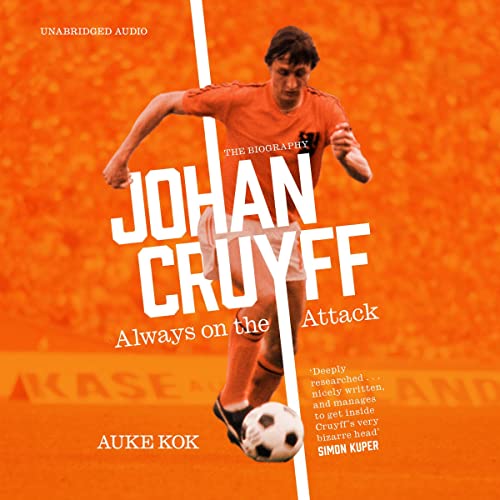 Johan Cruyff: Always on the Attack

Johan Cruyff was one of the greatest footballers of all time, a worldwide phenomenon and arguably the most famous Dutchman of the 20th century. As a player on the pitch and later as a coach off the pitch, his brand of total football added a whole new dimension to the international game.

However, although he led a large part of his illustrious career and life in the spotlight, in many ways Cruyff the man and sportsman is still a complete mystery. This compellingly written biography, based on years of extensive research, is the first to describe all aspects of Johan Cruyff’s life and work, from his key influence in the great Ajax and Netherlands sides of the 1970s to his role in creating the modern footballing phenomenon that is Barcelona. Using countless unique documents and drawing on hundreds of interviews with friends from his childhood and school, coaches, teammates, on-pitch opponents, business associates and family members, Auke Kok has written the definitive biography of the rascal, son, family man, footballer, manager, football philosopher and commercial pioneer that was Johan Cruyff.

Cruyff’s life unfolds like a boys’ own story, the working-class boy who grew up to become a global phenomenon. Hearing Johan Cruyff: Always on the Attack will reveal the true Cruyff, how he shaped his enormous influence as a ‘total footballer’ and how the brilliant yet initially shy and skinny Cruyff would acquire a reputation as an innovator, know-it-all and brawler, as well as a source of inspiration for millions the world over.

What listeners say about Johan Cruyff: Always on the Attack

The book is well written and the reading is quite good, however the pronunciation of names is really below any acceptable standard. Even well-known names such as queen Juliana of the Netherlands or former German international Gunter Netzer are spelled out as "Huliana" and "Hunter Nezter", let alone Dutch and Spanish names (machismo is spelled out as "maquismo", for example).
Having said that, I found this book very good and full of information. After hearing Cruyff's autobiography, this book seems to shed light on many stories and anecdotes mentioned there, for example the famous "swimming pool incident" of 1974.