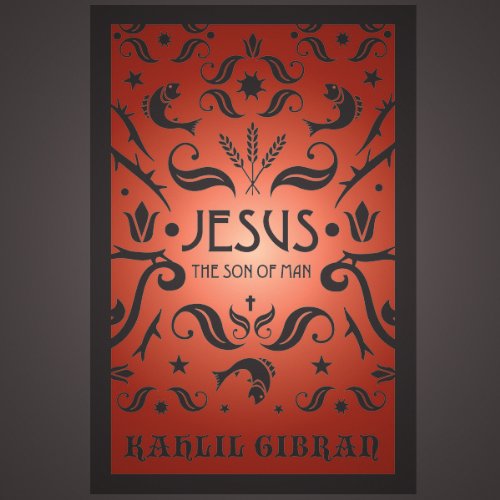 By: Khalil Gibrán
Narrated by: Arthur Brown
Try for £0.00

Gibran's Jesus: The Son of Man is a portrayal of Christ through the eyes of His contemporaries - men and women who knew him as an enemy, friend, teacher, and Son.

The characters, including Mary Magdalen, Simon Peter, Pontius Pilate, and Barabbas are brought to life against the social, political, and religious realities of Palestine and Rome at that period. The narration gives the listener the impression that they are there 2000 years ago, discussing what has become the most talked-about period in the history of our planet.

Read here what Pilate's wife had to say to a Roman lady: 'I was walking with my maidens in the groves outside of Jerusalem when I saw Him with a few men and women sitting about Him; and He was speaking to them in a language which I only half understood. But one needs not a language to perceive a pillar of light or a mountain of crystal. The heart knows what the tongue may never utter and the ears may never hear. He was speaking to His friends of love and strength. I know He spoke of love because there was melody in His voice; and I know He spoke of strength because there were armies in His gestures. And He was tender, though even my husband could not have spoken with such authority. When He saw me passing by He stopped speaking for a moment and looked kindly upon me. And I was humbled; and in my soul I knew I had passed by a God. After that day His image visited my privacy when I would not be visited by man or woman; and His eyes searched my soul when my own eyes were closed. And His voice governs the stillness of my nights. I am held fast forevermore; and there is peace in my pain, and freedom in my tears. Beloved friend, you have never seen that man, and you will never see Him. He is gone beyond our senses, but of all men He is now the nearest to me.'

"In Jesus, The Son of Man, we have a most unusual book of great beauty; you feel that the contemporaries of the Master would have spoken much as the author imagines them to speak...a truly scriptural mode of thought and expression...a work of literary and artistic worth." (Catholic Times.)

What listeners say about Jesus

It grows on you

Listening to this book, I was initially surprised at its boldness in talking on behalf of those who knew Jesus. Once I accepted that it is essentially a work of fiction, but recognised that it is seeped in scripture, I relaxed into it. This is a challenging book. It speaks for characters who both hated and loved Jesus. It tells of his power as a man, as one who walked among us. I would recommend this book for those who want to know more about Jesus, offering caution to remember that it is a work of fiction.

I felt like I stepped into the life and time of Jesus every time I listened to this. Very moving and pleasant to listen to.