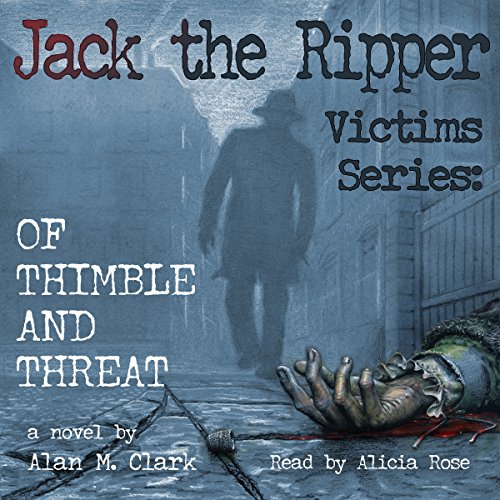 Jack the Ripper Victims Series: Of Thimble and Threat

This novel is part of the Jack the Ripper Victims Series. In Victorian London, the greatest city of the richest country in the world, the industrial revolution has created a world of decadence and prosperity, but also one of unimaginable suffering. Ever-present in its streets are rats, parasites, filth, death, decay, danger and sorrow. Catherine Eddowes is found murdered gruesomely in the street. When the police make their report, the only indicators of her life are the possessions carried on her person, likely everything she owned in the world. In Of Thimble and Threat, Alan M. Clark tells the heartbreaking story of Catherine Eddowes, the fourth victim of Jack the Ripper, explaining the origin and acquisition of the items found with her at the time of her death, chronicling her life from childhood to adulthood, motherhood, her descent into alcoholism, and finally her death. Of Thimble and Threat is a story of the intense love between a mother and a child, a story of poverty and loss, fierce independence, and unconquerable will. It is the devastating portrayal of a self-perpetuated descent into Hell, a lucid view into the darkest parts of the human heart.

What listeners say about Jack the Ripper Victims Series: Of Thimble and Threat

Sensitive Portrait of the Life of a Ripper Victim

This elegant and moving little novel takes its inspiration from the personal effects found on the body of Catherine Eddowes after her murder during the Autumn of Terror in 1888. Eddowes apparently carried all that she owned in the world with her, and Alan M. Clark extrapolates a life story from these items. The result is a powerful and well-researched meditation on the conditions faced by women in the East End of London during the late Victorian period.

This is not a novel about Jack the Ripper or about Eddowes's death (which is covered in a few brief paragraphs); it is a tragic and compelling tale about a woman's life. Its sensitive story puts a human face on both the so-called People of the Abyss and a victim of the Whitechapel murders.

The Downfall of the Pretty Girl

I have now listened to three of the four books in the Jack the Ripper Victim series, and I see that Alan Clark's fictional biographies of the women, made famous by their murder, are historical treatises on the plight of women in Victorian London. We have be told, when reading about Jack, that his victims were drunken prostitutes, that they had husbands and children whom they abandoned in favor of the cruel life on the streets using their bodies to earn their doss. In other words, to Victorian men, women were less than nothing, mere chattel to be done with as they pleased. Giving a life, replete with emotions, needs and desires, to each of the victims allows us to see these women as the human beings they once were.

Each of the books provides a totally believable scenario for the life of each victim. His account on Katherine Eddowes differs slightly from the other two about whom I have read. Her life had a definite turning point that led her down the path of over indulgence in alcohol and giving in to the need for money by prostituting herself. The history contained here is in some ways less appalling than for Annie Chapman and Polly Nichols. Alan Clark has struck a balance that lends more credence to this series of fictional biographies.

This is the first book in the series where the soon-to-be victim voices an awareness of Jack. In fact, she makes a fairly significant life decision based on that knowledge.

OF THIMBLE AND THREAT gives more of a direct nod to Clark's long standing in the horror genre as both a writer and an illustrator. This is most evident in the more than a little chilling end to Katherine Eddowes life.

I continue to be enthralled with the stories in no small part because of the narrative performance of Alicia Rose. I am inclined to recommend that you skip the written word in favor of the spoken so as to be fully immersed in the experience of Victorian London her reading provides.