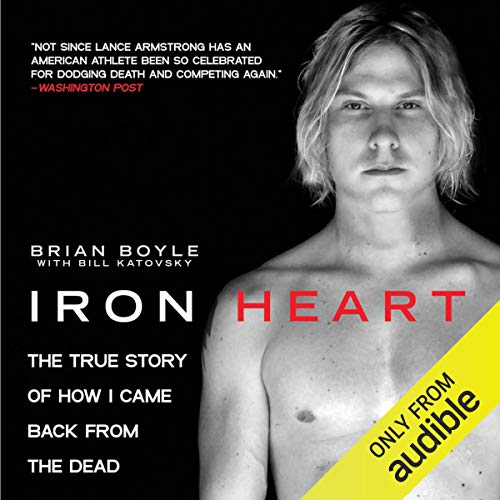 By: Brian Boyle,Bill Katovsky
Narrated by: Robin Bloodworth
Try for £0.00

Robin Bloodworth's gravelly baritone engagingly performs the story of Brian Boyle's miraculous recovery from a car accident that left him with injuries so serious he had to be put into a medical coma. Boyle woke up two months later unable to move or talk and, in this memoir, Bloodworth expresses Boyle's inner voice with charm, revealing the vitality still pulsing within his disabled body. Despite the gravity of his physical condition, Boyle managed to beat the odds and achieve an inspiring comeback in only a few years. Listeners will find themselves moved by Bloodworth, who makes Boyle's every frustration and every joy feel immediate and convincing.

Iron Heart is the first-person account of his ordeal and his miraculous comeback.

On the way home from swim practice, 18-year-old athlete Brian Boyle’s future changed in an instant when a dump truck plowed into his Camaro. He was airlifted to a shock-trauma hospital. He had lost sixty percent of his blood, his heart had moved across his chest, and his organs and pelvis were pulverized. He was placed in a medically-induced coma. When Brian finally emerged from the coma two months later, he had no memory of the accident. He could see and hear, but not move or talk. Unable to communicate to his doctors, nurses, or frantic parents, he heard words like “vegetable” and “nursing home.” If he lived, doctors predicted he might not be able to walk again, and certainly not swim. Then, miraculously, Brian clawed his way back to the living. First blinking his eyelids, then squeezing a hand, then smiling, he gradually emerged from his locked-in state. The former swimmer and bodybuilder had lost one hundred pounds.

Iron Heart is the first-person account of his ordeal and his miraculous comeback. With enormous fortitude he learned to walk, then run, and eventually, to swim. With his dream of competing in the Ironman Triathlon spurring him on, Brian defied all odds, and three and a half years after his accident, crossed the finish line in Kona, Hawaii. Brian’s inspiring journey from coma to Kona is brought to life in his acclaimed memoir.

What listeners say about Iron Heart

I felt myself overcome with emotion with this very well written biography. Amazing what this young man overcame & conquered. I wonder what he’s doing now …….

I listened to this on my way to either daily and felt every emotion possible. Thank you for an awesome listen.

Amazing from start to finish. It was not what I expected but blew me away!

The best book I have ever read

Right from the very beginning this book had me hooked. It’s incredibly descriptive, I felt I was there the whole time, and what a truly inspirational story.

omgosh I don't have the words. Awe inspiring . Definitely recommend. This book definitely makes you think that you meet people every day and you don't have a clue what they are fighting x

Wow, what a story. loved it from the first opening lines. I've completed Ironman triathlons and know exactly what it takes. This story is so inspiring.

What a story, what a hero!! Be warned though, there's a handful of teary moments in there. Recommended!

I appreciated the story and the way it was presented. Mostly just a recount of Brian’s life and what he went through with little philosophical fluff. Brian takes you through his journey and leaves you at your starting line.

“IRON HEART” is an incredible true story of resilience, courage, determination and love. Brian Boyle had his whole future ahead of him. He had just graduated from High School with plans for college and many athletic events ahead when a dump truck t-boned him while driving to swim practice. This true story reveals his journey while fighting to stay alive in ICU through multiple surgeries .. coming out of a 2 month coma and his rehabilitation to get back on his feet .. it’s a “MUST READ”..

I'm not sure the reader was the best one for the story; I felt like he was fairly dispassionate at times, and I think this book needed to convey the passion of the author, especially in his loss and struggles. The story is an amazing telling of his injuries and recovery, and his determination to regain his life after a horrific accident. It draws you in from the first page and is one of those that is genuinely hard to put down.

Enjoyed going on this journey with Brian. Great listen ! Recommend to several friends and co-workers.

A Once in Awhile Book

I love to read, and thus consume many books. This book is inspirational on a level far beyond the ordinary. What a blessing it was to read ... right down to the last sentence!

I so loved listening to this young man’s experience. It really touched my heart, and inspired me personally. I laughed and cried. Thank you for sharing your amazing story!

This story was very interesting. But the repetitiveness of him being in a coma and coming out of it. I didn’t like. But I also understand that it is part of the story of him having to repeat it to many different people. Don’t let that be the decision to not read it. It is definitely a great book to read or listen to

The will to never give up!

This is a story of a young man that literally saved from death, due to a terrible accident. No one believes that he would recover. His Doctor’s believe that he probably wouldn’t even be able to walk. Only by his determination to take one step at a time, made him believe he could recover. More termination than most of us have. A great read for everyone. There’s parts of the book was a little tiring. I still enjoyed it very much.