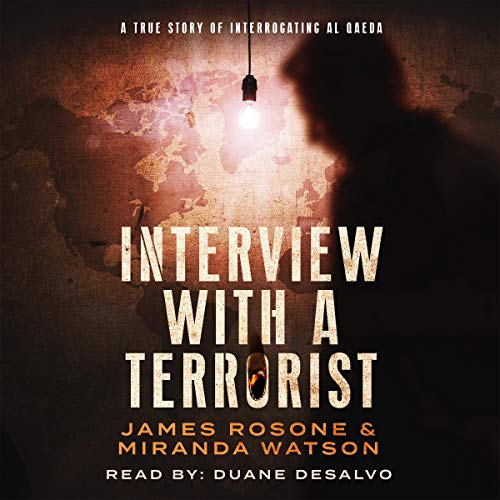 Interview with a Terrorist

By: James Rosone,Miranda Watson
Narrated by: Duane DeSalvo
Try for £0.00

From the Amazon best-selling authors of the Red Storm series....

Have you ever wondered what really goes on in those poorly lit interrogation rooms overseas?

Are you prepared to travel down a dark path into a world few know of...and even fewer have ever talked about?

In 2006, when the Iraq War was all but lost, a new strategy was implemented - not only would America place combat troops in nearly every village and city across Iraq, the US would systematically hunt down every terrorist and insurgent group operating in the country. However, that strategy relied upon the success of a small interrogation unit within Task Force 134 to find, locate, and eliminate these threats to peace and stability within Iraq.

Interview with a Terrorist follows James Rosone’s true-life story as he joined the interrogation team to try and make a difference in the conflict in Iraq. Learn what it was like to interrogate Al Qaeda prisoners and how he met the challenge of obtaining intelligence without the use of torture.

Experience what it’s like to sit across the table from some of the world’s most evil terrorists - men who just hours ago killed dozens of civilians or American soldiers. Experience the thrill of a capture mission that goes well and the sinking depression and anger of a mission that goes horribly wrong.

If you like insights into hidden worlds, conspiracies unraveled, and raw portrayals of American soldiers’ experiences, you’ll love Rosone’s frank and uncensored autobiography.

James Rosone has spent over 2,000 hours interrogating Al Qaeda terrorists, cracking their secrets to prevent attacks against US and Iraqi forces. He helped uncover terrorist cells operating in Europe, East Africa, and in the US homeland. All the while, he endured challenges few civilians could imagine.

Would you be willing to make the same sacrifice for your country?

Grab your copy and find out what goes on in one of the dirtiest jobs of any war.

What listeners say about Interview with a Terrorist

a bit of a yawn

compared to all the other books by the author which I have purchased this is a bit of a let down. completely destroyed for me by the unwarranted jesus stuff at the end. an authentic, first person experience spoilt by fantasy

Having been stationed in the Pacific area for most of my military career, I find myself thoroughly enjoying this series. Can hardly wait for the next book.

Looking forward to the rest of the series. A quick easy listen. Waiting ro see if things get so desperate that they recommission battleships or other museum ships.

I’m totally in love with this series now! I’m craving the next installment of the series!! I wish all the books were out now!!

To understand what interrogation means, and really involves, this book is very enlightening. I like reading it very very much.

A great perspective on something that affects us all, whether we realize it or not. I think many people have a certain impression or idea of what an interrogator does and how they operate, this is refreshing information from "the other side."

Every VA Employee should read/listen to this book

This is a powerful witness to the passion and commitment for all who work for the VA have to our nations' Veterans.

I grew up in a military family & am still connected through numerous family members & we also had one who came back from the Middle East unable to function so I was very interested in this book.

It was well written & extremely

It was well written & extremely honest & I appreciated hearing the truth in order to understand what has happened to so man of our young men. I recommend reading this book to be aware of the sacrifices these men have made. Thank you for your service, James

Worth readingI don’t know what I was expecting but was much different than other books that touched on The HUMMIT part of Intel gathering. The details of the training and actual interrogations were very insightful. I am a trained tactical Intel guy who got the short course (TIOC) to work in Intel at BN & BDE level so this was a great help in seeing what I had missed out on.

This is one of those stories that some people might think only concerns those who have interest in the military but it's much more than that. James Rosone's story is relevant to each of us as members of this society today. Interview with A Terrorist draws you in the life of someone working in a seriously misunderstood position. But the real beauty of this book is that you will not only better appreciate what the life of an interrogator is like, but you will also learn more about people in general.

It was very easy to follow the story and imagine what the interrogator was going through physically and mentally.

I highly recommend this book!

The story has more depth now and is focused on ensuing both Allies and China/Russian pact have their sides told without the stereotypical "Americans are always best and lucky" story.

Enjoyed the hell out of this series!

This series only gets better with each book. Viewing the war from the different armies adds depth to the story. The characters are real and the events are believable. Looking forward to book.

Never rains but sure as neck pours we fight here they come from there when cornered got to fight smarter still as we grow so do they as this war only just really getting started.

A thrilling look at an all too real possibility. Reminiscent of the good ole days of the techno-thriller, the authors bring you to a world at war.

This book reveals the truth about America's interrogation tactics, and is a compelling read! James is intelligent in his approach with the enemy, reminding me of the saying, "Be wise as serpents and innocent as doves," and because of this effort, lives have been saved. When you read this book, you will have a greater appreciation for those who serve our great country behind enemy lines! Thank you James for your service!

What a truly impactful book

As a retired military guy it brought tears to my eyes at times. I'll never forget being called a "baby killer" when I came back in 1970 after two years. It never ceases to amaze me how the pc lawyers and politicians who are too good to ever put a uniform on can send us in to do their dirty work and then call us criminals for doing our duty. Within the sometimes suicidal rules they concoct.

A must read if you truly want to cut through media hype and get a true picture of how our country treats those who are captured during times of war. Learn why waterboarding is NOT the most viable way for our country to get strategic and valuable information on the front lines. This book gives the reader a much different perspective of terrorism and the intricacies of world politics and interrelationships.