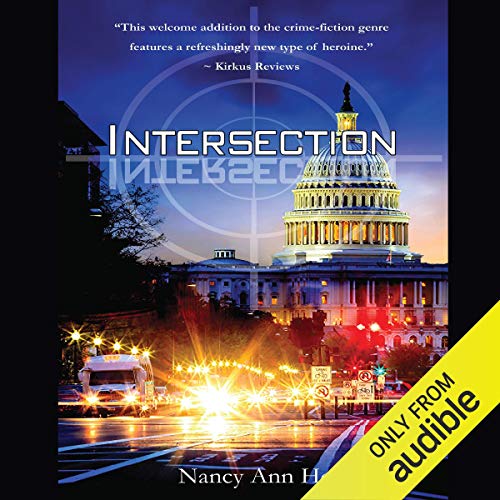 By: Nancy Ann Healy
Narrated by: Cassandra York
Try for £0.00

FBI agent Alexis Toles is dispatched to New Rochelle, New York, to investigate threatening letters sent to Congressman Christopher O’Brien and to protect his ex-wife, Cassidy, and six-year-old son, Dylan. But when she gets to New Rochelle, Alex discovers that there is more to the situation than simple stalking or political agendas; she finds that she has growing romantic feelings for Cassidy - and that the feelings are mutual.

As Alex and Cassidy explore their budding romance, they must surmount many obstacles in explaining their relationship to those around them, including Dylan. All the while, the investigation continues, and the disturbing, convoluted, and complicated web surrounding the threats begins to unravel, placing the characters’ lives in grave danger.

Intersection is a taut political thriller that combines the action and suspense found in hit television shows like 24 with the insight and drama found in the widely popular fiction of LGBT authors such as R. E. Bradshaw and Stacey D’Erasmo. It is sure to appeal to fans of intrigue, mystery, and romance and to provide positive role models for marginalized groups and relationships.

What listeners say about Intersection

I struggled to listen to this. Not the narrators fault. The characters had no depth and the dialogue was cringeworthy. Totally unrealistic.

I enjoyed the performance but the content was dreadful. The “story” was of two women falling in love at first sight and their subsequent lovey-covey interchanges. All set against a supposed political intrigue that was never explained. One of the women had the president of the USA on speed dial and others spoke to the president in an unbelievably casual fashion given the nature of the office. I won’t be listening to anything more by this author. But I will look out for Cassandra York who did a great job.

This would be what I would think of as a cheap paperback romance novel at checkout. The only difference here is that the cover would feature two women.

Alex, the main protagonist, is a lesbian who doesn’t like giving her heart away. She’s dedicated to her job and women are just a time to time distraction for the night. Cassidy, is a straight woman who was married to a congressman and she they have a son. Stuff goes wrong (doesn’t matter what, that’s the whole crime drama part of the book and, really, isn’t important). Alex is assigned to protect Cassidy. The woman who doesn’t give her heart away and the straight woman, see each other and fall in love immediately.

By day TWO these two are declaring their undying love for each other and engaging in cheesery to the extreme! The straight woman doesn’t think twice about all of a sudden wanting a woman. Her mother thinks it’s cool and makes jokes a out their sex life, and her son (whom the narrator made annoying and irritating to listen to) also falls in love with the agent over night.

I’m not sure if this writer grew up on romance novels and soap operas, but the dialog between characters was so contrived that I gagged through most of it. The story, characters, and dialog were absolutely unbelievable to the point that I spent most of the time, proclaiming how, “that would never happen.” This book had all the depth and reality of a fairy tale combined with sex scenes from romance novel.

I really enjoyed this book. It was not the typical lesbian romance. Yes, there's romance, but it's the political storyline that I found intriguing and really kept my attention. When I finished listening to the audio recording, which was extremely well narrated, I wanted more. Looking forward to the next audiobook in the series.

I loved this series in book form and now with the narration by Cassandra York, it's been brought to life. Well done. A political thriller with twists and turns through the hallowed halls of the White House and governments abroad. Alex didn't set out find a family, but finding Cassidy and Dylan left her no choice when the heart wants what it wants. Well done. On to Betrayal and I will be buying the entire series!

No character development. Expects the the reader to be invested without putting in the work. Did not finish.

loved it. ready for the next installment
my favorite series. love, mystery, murder and Batman.

listened twice just to get the whole story.

story line refreshing. Enjoyed the intrigue and all characters. Love story even seems believable. I loved listening to this book.

More than one book

This was a great book it ended with no end and now I am moving to the next one. Narration was excellent and I hope it is the same narrator.

Good could have been great.

My first listening to this narrator as well as the words of this author. The story had everything a thriller, some comedy and of corse romance. The words described the scenes so explicitly that I felt I was there observing all that went on. I fell in love with Cassidy as Alex did and Dylan her son. For Alex finding Cassidy was the best thing that had happened to her in her life. I look forward to reading or listening to more of their story.