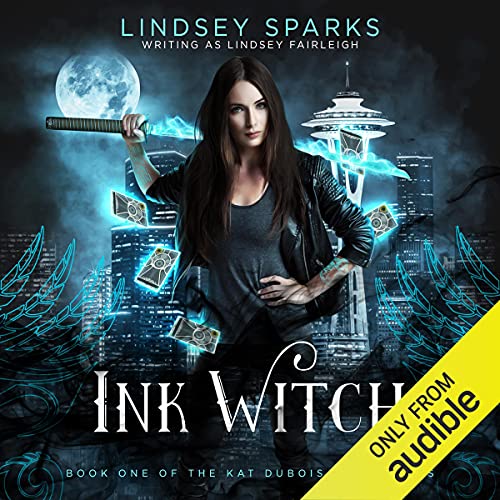 By: Lindsey Fairleigh
Narrated by: Julia Whelan
Try for £0.00

A whole new series from the world of the Echo Trilogy.

Three years ago, the gods abandoned us. We've been alone ever since.

Kat Dubois is immortal, and she's retired. She's long since hung up her sword and left assassinating immortals to someone else...anyone else. She's now a hard drinking, sass-flinging Seattle tattoo artist with the innate ability to read people's fortunes using her charmed deck of tarot cards. Her days of bloodshed are over, and she has nothing but time - an eternity, in fact - to hide from her past.

Until someone from her past shows up on her doorstep with news that her beloved older brother and mentor, Dominic, has gone missing. Kat may be the only person with the right skills - and access to the right magic - to track him down. She must confront her past if she's to have any chance of finding and saving her brother. She must fight her demons. She must embrace the power within her.

She must become the Ink Witch.

What listeners say about Ink Witch

Just enough to get you to buy the next book

The book was good actually but the ending just dropped off.

I feel the author is more interested in getting me to buy the next book then having a full and complete plot.

Total in thralling! The story is non stop and fast pace. Easy to visualize and follow in my mind. As for the narrator's performance it was spot on, bring the right amount of emotion and seniority to the character. I highly recommend this audio book, you won't regret listening.

It heavily depends on personal preferences. Lore does resemble some parts of Neil Gaiman's "American gods" although perspective is vastly different.It should appeal to the fans of genre - female POV, strong character and lore references. Depicted culture and characters do not lack details by any chance.Since I'm not quite a fan of genre - time spent listening was good enough to pass time, but not quite there to detach me from life and focus on listening.

A little bit more emotion/mindset into what it would "feel" like to be part of culture, that interacts with society and hidden right next to it.

On one hand - voice casting an immortal must have been somewhat tricky - a level of apathy is expected, though throughout the book overall lack of emotion did cause attention to blur.

Was Ink Witch worth the listening time?

If you are a fan of the genre - it's a decent book to grab. Otherwise - it's good enough to pass a few hours, but will not end up as a memorable book in library.

Comments based on experience of mid-twenties male.

This is probably the first series that I did not want to listen to the subsequent books. Although I usually love Julia Whelan, I was bugged listening to "Kat" partially because she swears like a sailor. There wasn't a lot of character development or back story and the ending was anti-climactic. Usually in a book series I am itching to find out what happens next and I ended this book feeling like I couldn't care less. My advice? Just save a credit and pick a different series.

Would you listen to Ink Witch again? Why?

I really like this book, the only negative is that there is so long pauses betwen chapters. A few times I almost got my phone out of my pocket to see if the app crashed, it was really annoying.

my all time favorite novel of books

these books go deep.
all the books are great, but they start reaching a whole new level in the third book get ready for a in-depth Adventure.

Excellent narrator for a great story!

If you could sum up Ink Witch in three words, what would they be?

If you haven't read/listened to the Echo in Time trilogy (plus 2 novellas), I think you'll enjoy this but will be missing a lot of the backstory. This is a fantastic continuation of the Echo in Time series, where Kat was introduced. Very excited for the next installment (already started it!)

The narrator is fantastic!! She does a great job with the different characters and gives life to Kat's insouciance from the novel; not an easy feat to combine the angst of teenager with an immortal 18-year-old. I hope that she continues to narrate the other 2 novels in this series (I think a 4th is due this summer, hope she does that one too!)

Wow! I really liked this book. I loved Kat and Nik. And what Kat did to save her brother was so fascinating. AND now she's going to get even with the families "Senate" for their betrayal.

No romance, which is good as far as I'm concerned. I hate losing track of the storyline while they have sex. That's not necessary. If I want to read about sex then I'll go back to historical romances. Also, the F-bomb was used 26 times.

As for the narration: Julia Whelan (AKA Sophie Eastlake) is a fabulous narrator. She's the main reason I got this book but it turned out to be a great story.

Love the dip into Egypt

I didn't realize, but this is a spinoff of the series Echoes in Time, which I have not read. Didn't keep me from enjoying this story. The world build is pinned to Egyptian mythology, a break from the Western/European urban fantasy tropes generally written about. Lots of new terms get thrown about, but I never felt lost with them.

Kat is a typical kick-ass heroine. A little lost, but not without reason. When she hears her brother has gone missing, she steps back into the life she'd set aside to bring him back alive. I kept waiting for the romance with Nik that is so obviously hinted at to develop, but it doesn't. Just sits there bubbling along at a high simmer, teasing all of us.

The most difficult question is whether to drop back and read Echoes, or keep swimming in the spinoff. Decisions, decisions.

MUCH better than the reviews suggested!!

I love that this story centers on Egyptian mythology. I LOVE Supernatural fantasy/urban fantasy, but generally it's all either Greek mythology or the usual vampires, shifters, witches stories. I REALLY enjoyed that this strayed from the norm.

The only thing I didn't care for is I don't know much about the mythology. Like the words they're using for soul and whatever "ot and anti ot" were. Since it's an Audible book I couldn't really Google "ot"

However, I do think this could be rectified by the other series that comes before this. The author mentions it on her website but says it's not necessary to read both to understand them both. But since that series came first I feel like there may be explanations there. I definitely enjoyed this story enough to "read" that series by the same author. Then I'll continue with this series.

All in all I feel it's really well written. I did see a few other reviews complaining about sex and swearing, unless you're from a convent this shouldn't really be that horrifying for you. If you're extremely prude-like, don't read it. But honestly it's not as bad as some others have said idk what they're lives are like but my best guess is bland.

Stop reading get the book!

I rarely write reviews but while I was listening to this book I was live tweeting and thought why not try to leave a review that being said I loved mostly everything about this book if I had a couple critiques it would the romance is very little and throughout the entire book she’s always mentioning her past I kind of wish there was prequel cause how much she references it I don’t think it’s a con personally but I know a lot of people who dislike like but that being said I will be buying book 2.

This whole series was awesome. The characters where brought to life perfectly by Lindsey Day (the reader)!! I couldn’t put the books on hold!! I read the whole series in 2 days!!