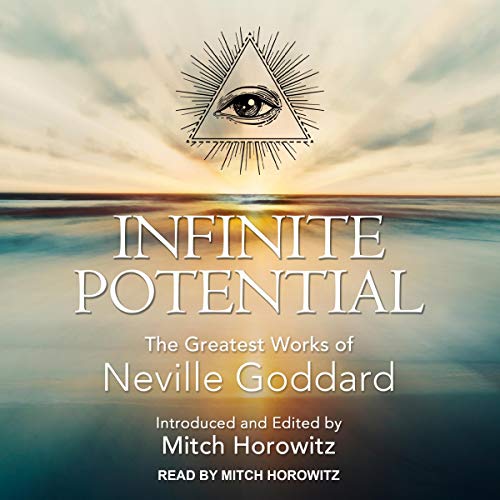 Neville Goddard, most often known simply as Neville, is one of the most powerful writers in the realm of mystical spirituality. Unknown during his lifetime, his work has grown increasingly popular, and his writings have influenced the likes of Rhonda Byrne, Carlos Castaneda, Joseph Murphy, and Wayne Dyer. The founding principle of Neville's work was stunning in its simplicity - Your imagination is God. This message of empowerment has resonated with countless people, urging them to fearlessly explore their own potential in a new way.

Compiled and introduced by PEN Award-winning historian Mitch Horowitz, Infinite Potential is a curated compendium of Neville's work, including the complete text of his first book, At Your Command, along with three never-before anthologized pieces from the great writer. Horowitz is the leading expert on Neville and his teachings, and his introduction frames Neville's work in both a historical and modern-day context, offering a complete timeline of the writer's somewhat mysterious life. Infinite Potential is an accessible and profound anthology from one of the greatest spiritual minds of the 20th century.

What listeners say about Infinite Potential

A wonderful collection of writings that encapsulate the work of Neville. Brilliantly delivered by Mitch

Fantastic work. At the moment my favourite book from master Neville 🙂. Well worth reading 👌👌👌

Great book, enjoyed listening and learning new perspectives. Big fan of Neville Goddard and this book shares much of his great teachings.

Well read by the articulate MH

This is masterpiece in every respect. Neville explains "complicated" concepts so simply that even a child could understand. perfect.

I loved it . some of the best teaching on Neville . Mitch does a great job at compiling his works.

I will recommend to everyone

I have purchased at least 12 of Neville Goddard’s books. This book highlights all of those books. Taking nothing away from any of the books I recommend this book as a complementary to all the other books. I will listen to this book over and over again for many years. I do not write reviews for books but this one is so good I needed to pass it on.

The writings of Neville as presented in this volume are, as I understand them, both affirming of each individual representation of divine imagination and likely mind-opening and expanding for most spiritual seekers, especially for those of us who grew up within some version of an Abrahamic tradition. I have an enlarged acceptance and appreciation for my own spiritual experiences and insights.

This book claims to help you use your attention and imagination to pull from the subtle realm. Through visualization and feeling, this book teaches you how to materialize your dream life. It also reinterprets the Bible from a non literal POV to accommodate this perspective.

Mitch does an awesome job in expressing the teachings of Neville Goddard. Very clear and precise.

Mitch brings Neville to life like no one else

I am always looking for newly released Neville Goddard materials, via books, speeches, and or lectures. I love his message and teachings. Mitch does an amazing job of communicating Neville's teachings with a very actionable approach. Mitch is also one of the best narrators I have ever listened to.

If Neville has grabbed your attention - this is the perfect introduction to his philosophy. Mitch Horowitz has a strong relationship with his work which makes his delivery all the deeper. Grateful for this audio collection!

Perfect narration by Mitch Horowitz does Neville Goddard Absolute Justice and Respect. Mitch gives us a wonderful perspective of Neville's Lectures and sheds light on many different aspects of these teachings which takes our awareness of them to a whole new level.

From a huge Neville fan….

Not for someone already familiar with Neville’s writings since it elucidates on only a few new details of his works and life.

I love Neville goddard amazing work well done and the narrator is simply amazing brings the whole experience together!! A must listen!