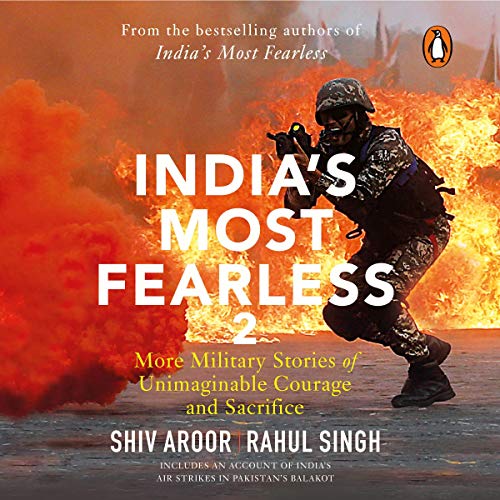 By: Shiv Aroor,Rahul Singh
Narrated by: Rajiv Dadia
Try for £0.00

First-hand reports of the most riveting anti-terror encounters in the wake of the 2016 surgical strikes, the men who hunted terrorists in a magical Kashmir forest where day turns to night, a pair of young Navy men who gave their all to save their entire submarine crew, the Air Force commando who wouldn't sleep until he had avenged his buddies, the tax babu who found his soul in a terrifying Special Forces assault on Pakistani terrorists, and many more.

Their own stories, in their own words. Or of those who were with them in their final moments.

The highly anticipated sequel to India's Most Fearless brings you 14 more stories of astonishing fearlessness, and gets you closer than ever before to the personal bravery that Indian military men display in the line of duty.

What listeners say about India's Most Fearless 2: More Military Stories of Unimaginable Courage and Sacrifice

At last someone is documenting these events for civilians

Great job. Such events were usually only heard of near the Republic Day. If one missed the presidential award giving ceremony. This is great that such events are now available to civilians too. Amazing job done by the writers, they keep you pinned till the whole chapter is completed. Good show