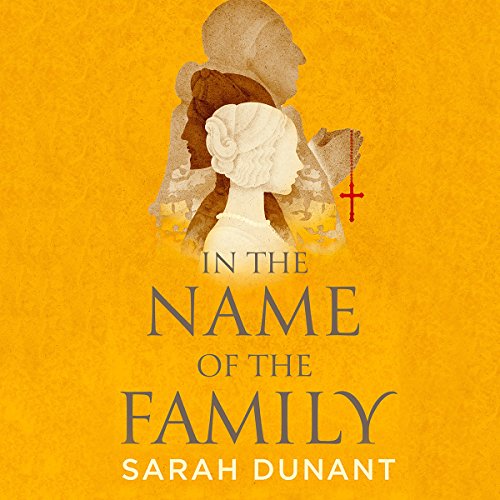 In the Name of the Family

By: Sarah Dunant
Narrated by: Nicholas Boulton
Try for £0.00

In the Name of the Family - as Blood and Beauty did before - holds up a mirror to a turbulent moment of history, sweeping aside the myths to bring alive the real Borgia family: complicated, brutal, passionate and glorious. Here is a thrilling exploration of the House of Borgia's doomed years, in the company of a young diplomat named Niccolo Machiavelli.

It is 1502, and Rodrigo Borgia, a self-confessed womaniser and master of political corruption, is now on the papal throne as Alexander VI. His daughter Lucrezia, aged 22, already thrice married and a pawn in her father's plans, is discovering her own power. And then there is Cesare Borgia: brilliant, ruthless and increasingly unstable; it is his relationship with the diplomat Machiavelli which offers a master class on the dark arts of power and politics. What Machiavelli learns will go on to inform his great work of modern politics, The Prince. But while the pope rails against old age and his son's increasing maverick behavior, it is Lucrezia who will become the Borgia survivor, taking on her enemies and creating her own place in history.

Conjuring up the past in all its complexity, horror and pleasures, In the Name of the Family confirms Sarah Dunant's place as the leading novelist of the Renaissance and one of the most acclaimed historical fiction writers of our age.

What listeners say about In the Name of the Family

It lacked substance and vibrancy, I wanted it to be better. I wasn’t rooting for anyone and didn’t get a sense of the period.

Historic Novel with a rushed ending

Historic Italy setting is very well portrayed however it is a bit journal-like. The Borgia characters are not really very deep, also the ending felt a bit rushed- not a fan of the epilogue. Still not a bad listen.

Sarah Dunant at her best

One of the most riveting and absorbing works of historical storytelling I have read this year. Dunant's understated yet compelling style smooths the path into the minds and times of the Borgia family, giving a clear and understandable account of the complex politics and turbulence of sixteenth century Italy. I'm already looking forward to listening to it again.

Sarah Dunant writes beautiful, intelligent and well-researched novels but they're never dull or dry. Her characters are lively and i went away to find out more about some of them. I'd love a whole novel on Machiavelli's wife!

Detailed, imaginative and engrossing. The narration was great too. I was sorry when it ended.

I tried audible to acquire this novel but found enduring the narrator’s Italian accents deeply off putting.

This was a fascinating series, along with 'Blood and Beauty' 👍, thoroughly enjoyed. Will seek out the other historical novels by Sarah Dunant. Nicolas Boulton also excellent.

I enjoyed this second part of the story even more than Blood and Beauty. The change of narrator between the two was an initial jolt but as both were equally good, it didn't take long to adjust. A
fascinating listen based on amazing facts