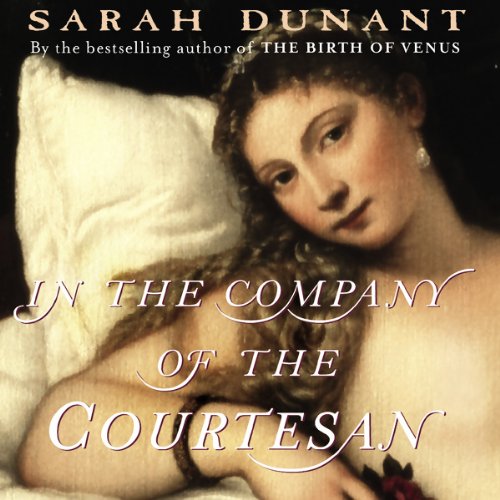 In the Company of the Courtesan

By: Sarah Dunant
Narrated by: Tom Hollander
Try for £0.00

1527. While the Papal city of Rome burns, brutally sacked by an invading army including Protestant heretics, two of her most interesting and wily citizens slip away, their stomachs churning on the jewels they have swallowed as the enemy breaks down their doors. Though almost as damaged as their bellowed city, Fiammetta Bianchini and Bucino Teodoldi, a fabulous courtesan and her dwarf companion, are already planning their future. They head for the shimmering beauty of Venice, a honey pot of wealth and trade where they start to rebuild their business. As a partnership they are invincible: Bucino, clever with a sharp eye and a wicked tongue and Fiammetta, beautiful and shrewd, trained from birth to charm, entertain, and satisfy men who have the money to support her. Venice, however, is a city which holds its own temptations. From the admiring Turk in search of human novelties for his Sultan's court, to the searing passion of a young lover who wants more than his allotted nights. But the greatest challenge comes from a young blind woman, a purveyor of health and beauty, who insinuates her way into their lives and hearts with devastating consequences for them all.
©2006 Sarah Dunant (P)2006 Time Warner AudioBooks
Historical Fiction
Show More Show Less

"What makes this audiobook enthralling is the combination of elegantly satisfactory plotting, almost cinematically vivid settings, and characters with real depth. The reader, Tom Hollander, brings them all before us as real people." (The Times)

"An engrossing saga of period Italian sex and skulduggery, enlivened by evidence of the author's extensive research into 16th-century Venice." The Sunday Times

What listeners say about In the Company of the Courtesan

This book must have one of literature's most surprising and unusual narrators. Emotionally retarded but quick-thinking dwarf Bucino. We see the lavish yet harsh environs of 16th century Italy through his eyes as the courtesan he serves flees Rome and re-establishes herself in Venice.
It's a rich tapestry of a tale that weaves itself through the colour of the times but at its heart lies humanity. We see Bucino unfold through his folly, feel his torment and his tragedy.
This version of the book is exquisitly read by actor Tom Hollander whose capacity to immerse himself in character is as embracing in voice as it is on the screen.
This will be a book that you cannot fail to remember.