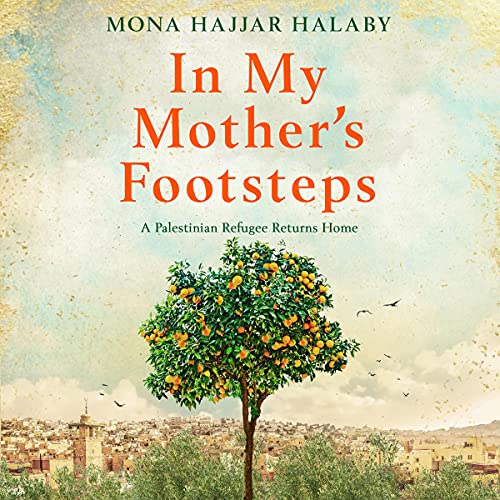 In My Mother's Footsteps

By: Mona Hajjar Halaby
Narrated by: Lameece Issaq
Try for £0.00

1948, Jerusalem. Zakia is forced to flee the only home she’s ever known as war rips through the leafy streets and the bustling spice-filled souqs. Taking just one suitcase, Zakia thinks she’ll be able to return soon. But within weeks, she realizes she won’t be allowed back to her beloved homeland.

2007, California. Mona grew up with her mother Zakia’s memories of Palestine, imagining the muezzin’s call for prayer and the medley of church bells her mother so vividly described to her. So, when Mona gets the opportunity to teach conflict resolution in Ramallah, she also embarks on a personal pilgrimage to find her mother’s home in militarized and occupied Jerusalem.

With cherished letters from her mother who writes to Mona regularly, sharing her story of Jerusalem, Mona dreams of one day being guided by her through the winding cobblestone alleys of the Old City. Yet it is Mona who instead holds her mother’s hand as they finally visit Jerusalem together. After 59 years of exile, her mother is returning to the place she once called home – but can a lifetime of loss ever be healed?

A moving and heartbreaking journey of a daughter discovering her Palestinian roots and recovering her mother’s beloved past. It’s also an intimate and tender account of daily life for Palestinians as never seen before. Perfect for fans of The Bookseller of Kabul and The Beekeeper of Aleppo.

"Utterly heart-breaking, absorbing, and tender...will stay with you long after you finish the last page." (Christy Lefteri, best-selling author of The Beekeeper of Aleppo)

"An intimately detailed and moving account of what’s lost and found when human beings are displaced." (Sahar Mustafah, author of The Beauty of Your Face, a 2020 New York Times Notable Book)

What listeners say about In My Mother's Footsteps

Interesting. I didn’t know all this

I listened to this book but I can’t remember why I chose it. It’s basically the life of a Palestinian family who were forced to leave their home when the country of Israel was created in 1948. I actually had no real understanding of the history of this area, only hearing of constant trouble in Gaza, the West Bank, Jerusalem etc in my lifetime. Hearing from the Palestinian perspective was eye opening. I feel I have been educated as the author explains in detail what happened and was is perceived to have happened to the natives, the inhabitants snd the Jewish newcomers after WW2 and right up to the present day.

Absolutely brilliant. Loved listening to this all of it. Voice crystal clear recommend it. Story was touching in everyway

This is a beautiful story of one family’s journey before and after the Palestine Nakba. Not only is it a well written and narrated book but it also is an accurate historical account of the important events in the history of the Middle East region.
I enjoyed and learned a lot from the class meeting sessions that teach conflict resolution strategies and stimulating self awareness amongst our youths.
I wish more Palestinians can put their stories into similar works of art!

After reading this true story, I have a new empathy for the Palestinian people. I highly recommend it.

I loved everything about this memoir. From the relationships between Mother & Daughter, Husband & Wife, Teacher & Student and everything in between ... to hearing the rich history of Palestine ... to grieving over the loss of home & country for so many. This memoir was honest and sincere and connected me to a time and place I otherwise knew little about. Thank you for capturing the stories that need to be remembered!