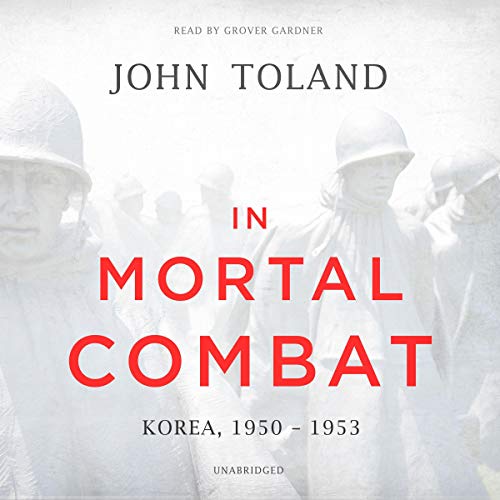 By: John Toland
Narrated by: Grover Gardner
Try for £0.00

In this brilliant narrative of America's first limited war, John Toland shows yet again why, for over two decades, he has been one of this country's most respected and popular military historians. Toland lets both the events and the participants speak for themselves, employing scrupulous archival research and interviews as the bases for the drama and accuracy of his writing. In Mortal Combat reveals Mao's prediction of the date and place of MacArthur's Inchon landing, Russia's indifference to the war, Mao's secret leadership of the North Korean military, and the true nature of both sides' treatment and repatriation of POWs.

In addition to being the first Westerner to gain access to Chinese records and combatants, Toland interviewed numerous North and South Korean veterans and over two hundred members of the American military, many of whom had never been approached before. The result is a signal work of compelling listenability and lasting importance.

What listeners say about In Mortal Combat

Korea was a most tragic war for all involved. So much loss of life, and for seemingly so little gains. John Toland does a masterful job of laying out the beginnings of the war, how it started with a sudden invasion of the south by the Communist North in Korea. It sounds like today's happenings. The South called on the Americans for help, and other UN forces. The United States contributed the most in terms of UN involvement. After WWII, the US military was not as strong as it had been. Many of the troops sent were completely unprepared for what they were about to face. But they nonetheless fought valiantly against the KPA, the Russians, who armed the KPA, and Chinese's brutal communist Mao, who secretly led the Korean People's Army of the north. No one could truly win this limited war.

This book highlights the fall of Douglass MacArthur, who was ultimately relieved of his command. The individual stories are the most touching, such as the brave fight of the POW's and the heroes of the Chosen Reservoir. No story is left unturned and the book is not about the power players, but about all of those who played a role in this devastating conflict. It's a well-rounded, fast past, stunning achievement. It could go on for 27 more hours and it wound't be enough!!

Grover Gardner is the best. Simply one of the very best narrators of military history. It just doesn't get better.

I have read books by several authors on the Korean War. This author differs from others (Halberstam, Hastings, Ferenbach), on discussion of several events (McArthur, Almond, US biological warfare, etc.). Does give new perspective on plotting before war started, postwar activities, POW’s, etc. overall I would give a Luke warm recommendation.

In Mortal Combat is a great history book. It got slower and less exciting toward the end, but that is more or less analogous to the Korean War. I knew the Communist Chinese threw in large numbers of soldiers but I did not realize that Communist China played such a central part...This book implies (if it does not clearly state it) that the Communist Chinese became the central opponent, and the two main reasons the US did not go into total war with Communist China were 1) we thought it would rope in the Soviets starting a nuclear world war and 2) that the American people (and “the West” in general) had a craving for finding peaceful solutions to aggressive nationalistic communism. The military restrictions to the Korean peninsula were extremely frustrating to many military people...I never thought I would be so sympathetic to MacArthur—he had some good points (I think Ridgway may have been the best of the men who held his position) though ultimately I suppose he was wrong about using nuclear weapons.

The format of “In Mortal Combat” reminded me of John Toland’s “Battle” about the Battle of the Bulge insofar as they both felt comprehensive, fair, and had depth in terms of visiting both sides and multiple levels of command and politics. Mr. Toland gives many tactical descriptions of battles and accounts of headquarters discussions and many first-person accounts from multiple positions. Chesty Puller and his Marines made a few appearances, including in a worthy account of the Chosin Reservoir battle which I thought was described similarly here and in “One Bugle, No Drums”. Mr. Toland’s work definitely gives the impression that he sought the truth and produced an account of the Korean War that is as balanced and as close to the truth as one can be.

If I find a better book about the Korean War then I may modify this review...But without any direct comparisons presently under my belt "In Mortal Combat" gets five stars. Grover Gardner's reading is very good.

loved it and I feel like any history buff will as well. get it. thanks.

as a g**k myself i listened to this book to get a better idea about the Korean conflict. the book is well written but many a times it feels like a yt dude highlight reel. overall i enjoyed the listen, the author's ending credits are worth committing to memory. I'll check out other of Tolland's work in the future.

One of the better books I have read on the Korean War . Toland makes it clear that there were lots of mistakes made by all sides both politically and tactically. Though there were plenty of heroes who fought bravely there were also no saints on either side. There were many new facts that I was unaware of like the Chinese POW revolt. Toland also made it clear this was a new era in warfare and how it would be conducted going forward. Unfortunately I’m not sure our leaders have received the message.
The one positive we as Americans should note is that the War was worth fighting as evidenced by the vibrant South Korean country versus the despicable North Korean regime.

book was very researched and well written the Korea war is one that I knew little about. the book was informative.

Roland us a good author and historian but this book moves very slowly and it is an effort to get through it.

Another club banger from Toland

This guy just won't quit, what a great read!! As usual, this is a military history book that reads like fiction, it is so engaging! He includes stories of various people in Korea over the course of the war, getting you invested in each small obstacle they have to overcome. At the same time, all that is interwoven with the big-picture narrative. TOLAND = BEST BOY!