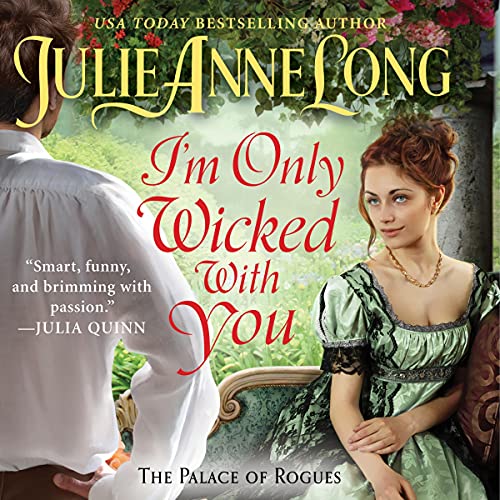 I'm Only Wicked with You

By: Julie Anne Long
Narrated by: Justine Eyre
Try for £0.00

USA Today bestselling author Julie Anne Long continues her Palace of Rogues series with a brand-new romance about an ambitious American and a headstrong British heiress.

He’s the battle-hardened son of a bastard, raised in the wilds of New York. She’s the sheltered, blue-blooded darling of the London broadsheets, destined to marry a duke. Their worlds could only collide in a boardinghouse by the London docks...and when they do, the sparks would ignite all of England.

Nothing can stop Hugh Cassidy’s drive to build an American empire...unless it’s his new nemesis, the arrogant, beautiful, too-clever-by-half Lady Lillias Vaughn. The fascination is mutual. The temptation is merciless. And the inevitable indiscretion? Soul-searing—and the ruination of them both. Hugh’s proposal salvages Lillias’s honor but kills their dreams for their futures...until they arrive at a plan that could honorably set them free.

What listeners say about I'm Only Wicked with You

one of the best

absolutely loved this book. thank you JAL you outdid yourself with this one. please can we have more. Justine your narration is still the best.

Continue to be grateful to have found Julie Ann Long, a new author for me. What a talent she has for telling a great story and for developing such fine and likeable characters. This book is my favorite in this series. Justine Eyre did a fine job with the American accents. That is not always the case....thank you, JE.

My fav of the series and that’s saying a lot

I smiled, I laughed, I loved it. First, the narrator is amazing. The use of her different voices is fantastic. The story itself was so descriptive and Hugh was brilliant in his wit and tongue.
I loved it