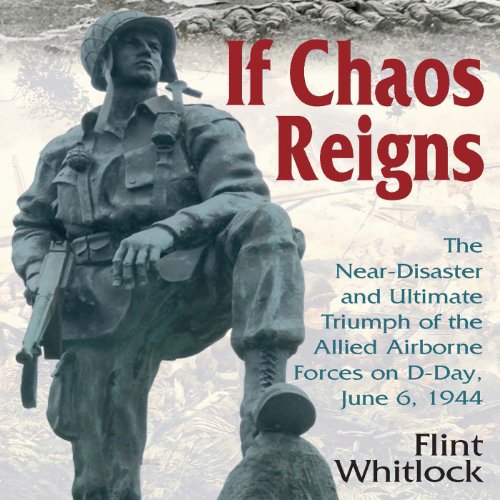 By: Flint Whitlock
Narrated by: Michael Prichard
Try for £0.00

"Gentlemen, do not be daunted if chaos reigns; it undoubtedly will."

So said Brigadier S. James Hill, commanding officer of the British 3rd Parachute Brigade, in an address to his troops shortly before the launching of Operation Overlord - the D-Day invasion of Normandy. No more prophetic words were ever spoken, for chaos indeed reigned on that day, and many more that followed.

Much has been written about the Allied invasion of France, but award-winning military historian Flint Whitlock has put together a unique package - the first history of the assault that concentrates exclusively on the activities of the American, British, and Canadian airborne forces that descended upon Normandy in the dark, pre-dawn hours of 6 June 1944. Landing into the midst of the unknown, the airborne troops found themselves fighting for their lives on every side in the very jaws of the German defenses, while striving to seize their own key objectives in advance of their seaborne comrades to come.

Whitlock details the formation, recruitment, training, and deployment of the Allies' parachute and glider troops. First-person accounts by the veterans who were there - from paratroopers to glidermen to the pilots who flew them into the battle, as well as the commanders (Eisenhower, Taylor, Ridgway, Gavin, and more) - make for compelling, "you-are-there" listening. If Chaos Reigns is a fitting tribute to the men who rode the wind into battle and managed to pull victory out of confusion, chaos, and almost certain defeat.

Author/military historian Flint Whitlock graduated from the Army's Airborne School at Ft. Benning, GA, in 1965 and spent five years on active duty, including a combat tour in Vietnam. He is the author of nine books, six of which are about World War II, and is currently the editor of WWII Quarterly. He has appeared in documentaries on The History Channel and on the Fox Channel's War Stories with Oliver North, and now lives in Denver, CO.

What listeners say about If Chaos Reigns

Such courage from young men.

They wear the wings of Angels. Never to be forgotten. Always remembered... Heroes one and all.

One of the best D-Day books ever!

I cannot praise this book highly enough, as the title says!
For one it doesn't pages & pages slating Monty or other British Generals or senior staff. Thank you for giving a British & Canadian perspective of the battle, instead of making out the Americans did it all, as the years have passed Hollywood have managed to erase the British and Canadian part of the battle, this puts all the allied forces in the picture. Each soldiers/para's story is told empathy, whether funny or heart rendering. Very well researched and told by the author and excellently narrated. Cannot praise this book highly enough

Highly informative, completely balanced and thoroughly researched. The author is painstaking in creating a full all inclusive picture as possible and it is good to see the naming of many ordinary Tom's. After reading I am left with an even higher regard for the Greatest Generation, these Paras set the standard that has been upheld to the current day; every generation of Paras has this rammed into their head during training and in act it if they make the grade and get to Battalion.

Good story, goes into good detail on formation of airborne and glider units.
The new stuff I learned in this book concerned mainly about the Canadian Airborne units. Before this book I did not know there were Canadian Airborne.
Leigh Mallory’s objections to the US Airborne drop seem a little suspicious as he did not object to the British and Canadian drops. It makes me think Mallory may have had an ulterior motive to get the US Airborne drop cancelled.
Maybe he wanted control of the planes, maybe he wanted to control where the US Airborne divisions were used.
Good thing the US Airborne was dropped where it was and was able to be relieved by US ground troops.
if they had been dropped elsewhere, say over by Caen, would British ground troops had relived them in time?
Having US Airborne under British control for relief and resupply would have risky for the safety of our Airborne troopers.
For instance,
If the 101st or 82nd had been dropped at Arnhem during Market Garden we would have lost completely one of our Airborne units.