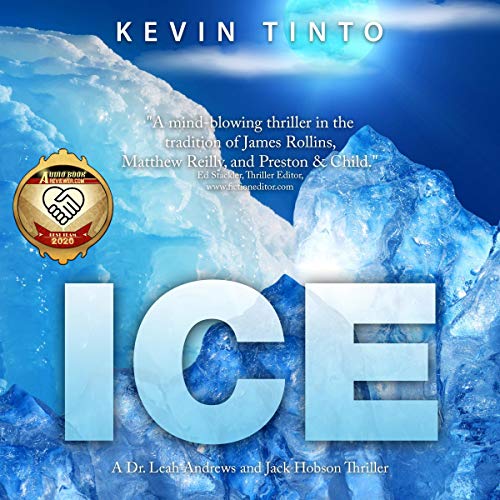 By: Kevin Tinto
Narrated by: Pamela Almand
Try for £0.00

We are writing with some fabulous news! Ice has been named the Winner in the action/adventure category of the 2016 Next Generation Indie Book Awards. Congratulations!"

The debut best seller that has sold more than 400,000 Kindle and paperback versions!

Archaeologist Leah Andrews stumbles upon something inexplicable in southwestern New Mexico: Inside a dark cavern lies an undiscovered, Native American cliff dwelling abandoned for 800 years. While twisting through one of the narrow underground passageways, Leah’s flashlight illuminates the remains of a violent massacre.

Ancient human remains - all slaughtered in a long-ago massacre - cover the cavern floor, along with several brilliantly colored, granite crystals. The rare gems are native to only one place on earth: A frozen mountain range in central Antarctica.

Could Native Americans have traveled to the frozen continent of Antarctica 800 years before the first known human exploration? If so, how? And why?

There’s only one person who can get Leah to those mountains in Antarctica: Her estranged husband and climbing guide Jack Hobson.

At their destination, they make a stunning discovery that will change history and science forever. But Leah’s team is far from the only interested party.

As her secret makes its way to the highest levels of government, a race to seize the Russian-claimed Antarctic territory brings the world to the brink of nuclear conflict.

What listeners say about Ice

Once started it was hard to stop listening. Thoroughly recommended. Looking forward to the next in the trilogy to be released on Audible.

Ice is the best-selling first novel in the trilogy with the same name by Kevin Tinto. As a huge fan of the epic adventures of Indiana Jones and as one who devoured all the Uncharted action adventure video games, I was eager to find out more about this story that features such a tantalizing Publisher Summary.

With Ice, Mr. Tinto takes us into a breathtaking globetrotting adventure spanning from New Mexico to Antarctica, with a few surprises along the way. Driven by a strong plot, credible characters and filled with intriguing events and discoveries, Ice is a strong first novel in what could become a blockbuster Trilogy in the action adventure genre.

As compelling as the story is, it’s made even better by the absolutely fantastic performance delivered by former aviation captain and multiple award-winning voiceover artist Pamela Almand. She brings all the characters to life using a large range of voices and accents, she reads beautifully, she acts with talent and she even goes the extra mile doing her best to offer accurate reproductions of some native American dialects. That’s what separates the great narrators from the good ones. Although this is the first time I listened to Pamela performing an audiobook, I instantly fell in love with her voice and her acting skills, but I would not have expected less from a winner of the coveted AudioFile’s Earphones Award prize.

I was left hanging by a tree branch at the end of Ice, but I will wait patiently for the next two sequels, as I really want to find out how the story ends. Fans of Clive Cussler classic adventure series should take the Ice trilogy very seriously!

If you like this review please consider giving it a Helpful Vote below. You can find more of them here and on theAudiobookBlog. I also post reviews at the author / narrator / publisher’s request. Get in touch with me for more details.

I could not stop listening when I started. This is 90% adventure and 10% romance so I'm not sure why it's in the romance section. But I highly recommend giving this book a chance. It's a slow and steady book but does not disappoint.

Out of this World Mystery

Leah Andrews is a renowned Archaeologist who is on a mission to discover the mystery of a tribe of Native American Indians that lived in a cliff dwelling in the southwestern area of New Mexico which just happens to be on government property. What she discovers there requires her to reach out to her estranged husband, Jack Hobson. His connections and expertise of the Antarctic territory are exactly what Leah needs to solve the mystery. Hobson brings in experts and finds a financer which adds another twist to their mission – recovering an antique plane on Russian claimed territory!

Kevin Tinto, the author, builds the story slowly but powerfully starting with the deadly climb up and down Mount Everest ending with the team making a discovery that is out of this world! Each step of this book is well written and realistic especially the “governmental red tape” and politics that occur in the storyline. Tinto is methodical as he moves Leah and her team through every step of their exploration and discovery. Edge of your seat excitement every with every word!

Tinto takes time to build each character and ties them to the storyline perfectly. One cannot help but root for Leah and Jack. Ice is vividly written, with strong characters, and the listener cannot help but be disappointed when they hear the “we hope you have enjoyed this audible production”. I look forward to the next book in this trilogy!

Pamela Almand, the narrator, provides an excellent performance. Almand moves the story along with the right amount of emotion and enthusiasm. Her cadence is smooth and easy to listen to. I found Almand gave each character the right tone which reflected the personality of each character. Almand immersed not only herself into the story but she brought the listener in as well. This is the first time I heard Pamela Almand perform and I loved it!

There were no issues with the production or quality of this audiobook.

Disclaimer: This Audiobook was provided free of charge by the author, narrator, and/or publisher in exchange for a non-bias, honest review.

Ice has been a book on my list for quite some time, but it was never available in audiobook — until recently. I was excited when I saw it was coming out in October and I featured it in my New and Notable post the week that it came out.

Ice was one of those books that at its heart has the feeling of a great adventure book, similar to Indiana Jones movies and books by David Wood, James Rollins, and Preston & Child. But it had a science fiction twist that even I didn’t see coming near the end. I won’t spoil it, but let me say that the book went from feeling like a straight up adventure novel to feeling a little bit like a dream. I was trying to explain what happened to my wife and it felt like trying to explain a dream. And then this happened, but that kind of makes sense but sounds crazy as I say it out loud. Now, I don’t say that to say that the book or the ending didn’t make sense. It did, but without mentioning the twist here, it’s something you’ll likely not see coming.

The storytelling really stands out in Ice. Tinto does a great job building up the tension and allowing the story to flow from one place to another without getting bogged down in too many details or too much “and it looked like this”. Each place was brilliantly described but not in a text-dump-way. Tinto was also great at creating characters that felt real but also were likeable and ones that were easy to root for. Leah Andrews is easily one of the stars of the book and every scene with her in it jumps off of the page.

Throw in great narration by a seasoned-pilot-turned-narrator, Pamela Almand knocks this one out of the park. She became Leah, but also didn’t drop the ball when it came to the male characters in the book. Sometimes narrators try too hard to do the opposite sex and it sounds bad. Almand didn’t and it was one of the first things I noticed. She really helped keep the pace that Tinto set and allowed the book to just fly off of the pages and into my ear.

Edge of my seat!

I thoroughly enjoyed the story and the narration. It moved along quickly so I was never bored. The details regarding the Native Americans as well as the rock climbing were fascinating. Looking forward to reading book two and other works narrated by Pamela Almand.

I was hesitant.
The perceived subject matter was not quite in my comfort zone and I was not attracted to the fact that the reader was a woman ... in a book that was of a ‘masculine’ bent ... etc, war and Seals. Feminists can make what they want of this, but I burnt my bra long again.
Having said that, I bought this audio and enjoyed it very much. The reader was excellent and the story, while at times ‘maddening’, drove the listener on with interest and enjoyment.
I do find the occasional times in such books when well educated people, with degrees and all, act silly or stupid in ways below their ‘pay grade’, to be irritating and annoying. As an example, a speech by such a person who is in the total power of very, VERY bad people ... “when I am free of you, I am going to tell the whole world what you have done and what bad people you are”!
I must admit, the author of this book seems to be aware of this and toward the end of the story, has the well educated and bright person have her ‘road to Damascus’ experience.
For me, enjoyable and well worth the money.

I loved listening so much I had to force myself to turn off my car and go in to work! I can’t wait for the next book. The narrator Pam Almand really brought the characters to life and I felt like I knew them all. I was impressed at the pronunciation of the native words and the different voices and accents of each character. I definitely will listen to more books using Pamela Almand as the narrator and Kevin Tinto as the author!

An excellent first book for this new Author!

I enjoyed every thing about this book.... I loved the Characters, the story, the locations, ... I look forward to reading the second book.

Started out interest but turned into just that “ interesting!” Not all that good of a story! Good imagination!!!!

Too many suspensions of disbelief

By nature, any novel is allowed 1 suspension of disbelief (wizards exist, aliens are real, ect…) I couldn’t finish the last couple chapters because they kept happening over and over and over again. Interesting premise turned into a corny Michael Bay esc, unrealistic sudo war book. Instead read Preston & Child’s Thunderhead and Clancy’s Sum of all Fears. Putting components of both into one doesn’t work.