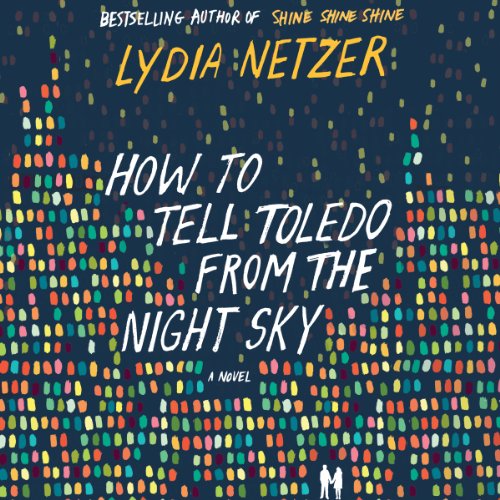 How to Tell Toledo from the Night Sky

By: Lydia Netzer
Narrated by: Joshilyn Jackson
Try for £0.00

Beyond the skyline of Toledo stands the Toledo Institute of Astronomy, the nation's premier center of astronomical discovery and a beacon of scientific learning for astronomers far and wide. One of these is George Dermont, a dreamer and a man of deep faith, who's trying to prove the scientific existence of a Gateway to God, and speaks to ancient gods and believes they speak back. Its newest star is Irene Sparks, a pragmatist and mathematician invited to lead the Institute's work on a massive superconductor being constructed below Toledo. This would be a scientist's dream come true, but it's particularly poignant for Irene who has been in self-imposed exile from Toledo and her estranged alcoholic mother, Bernice. When Bernice dies unexpectedly, Irene resolves to return to Toledo, and sets in motion a series of events which place George and Irene on a collision course with love, destiny and fate.

George and Irene were born to be together. Literally. Their mothers, friends since childhood, hatched a plan to get pregnant together, raise the children together and then separate them so as to become each other's soulmates as adults. Can true love exist if engineered from birth?

Lydia Netzer's How to Tell Toledo from the Night Sky is a mind-bending, heart-shattering love story for dreamers and pragmatists alike, exploring the conflicts of fate and determinism, and asking how much of life is under our control and what is pre-ordained in the stars.

What is this book really? Is it a mystery? A romance? A fantasy? Some sort of Science Fiction? All of the above?

It's been a week since I've finished this book and to be honest, I'm still processing it. I liked it, I know that for sure, but there was so much to take in throughout the book that it took me a lot longer to read than I had anticipated.

First of all, I'm an Ohio girl, so any book that includes Toledo and Bowling Green references has my attention!!

There is a lot of science in this book with all the astronomy talk. Most of that went over my head. (how much can we talk about black holes, really?!) There's a lot of theology about Gods related to the history of astronomy. That also went over my head. And then there were video game references, which totally went over my head. But, there's a lot of talk about astrology and how paths are created and determined based on dates, times, and locations. That part I could really get behind. What is intuition - is it a subconscious calculation or something more mystical? And there was a lot of lucid dreaming, which is not something I've experienced but have read about before and thought it was cool to have it included.

“Sleep is a shallow death we practice every night.”

But it was the romance that kept me reading. The idea of soul-mates and destiny or fate. Can someone herd an individual along a particular path until they reach a particular destiny/destination? Can you really fall in love with someone just by meeting them?

“Why do some people fall in love each other and other don't? What is love? Its so, so stupid. Right up until its real. And then its the most important thing in the world, whether you believe in it or not.”

Netzer has an amazing imagination to be able to concoct this tale. The characters are fun to read and relate to. And as the author unravels the experiences the characters are having in the present, she beautifully intertwines the past into the story, just enough to build the pace of the story but also keep us wondering. I liked the mystery and putting the pieces together and wondering if anyone was going to ever get their happy ending...

The narrator did a fabulous job with all the characters. I really liked how she voiced the character of Belion :)

My 1 star for the story isn't necessarily accurate as I didn't finish the audio book. I will seek out a library copy of the book to read because the narration was horrible.

What disappointed you about How to Tell Toledo from the Night Sky?

The narrator talked for over 11 hours in babytalk. I thought I would lose my mind.

Would you ever listen to anything by Lydia Netzer again?

The story is forced and weird. No.

Not enough negative adjectives for this book

Would you try another book from Lydia Netzer and/or Joshilyn Jackson?

Lydia Netzer: NEVER Joshilyn Jackson is an amazing author and her narrations of her own novels are wonderful.

Has How to Tell Toledo from the Night Sky turned you off from other books in this genre?

What genre is it--fiction??Science fiction?? Fantasy? Ramblings from someone trying to fill up pages?

Multiple narrators--there were too many characters for one person to do. Jackson's voice doesn't lend itself to many of the characters very well.

What character would you cut from How to Tell Toledo from the Night Sky?

The research assistant, George's dad, the girl who is mute. There are so many terrible characters with terrible voices.

There are times during this book that it felt like a pre-teen was writing the novel, other times it sounded like the author was writing during a drug induced hallucination. The dialog between the characters is awkward--there really is no conversation in this book. Its terrible--I have no idea how this book got published.