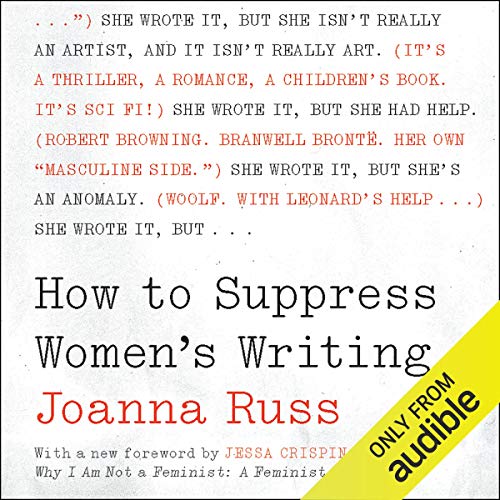 How to Suppress Women's Writing

By: Joanna Russ
Narrated by: Robin Miles
Try for £0.00

Are women able to achieve anything they set their minds to? In How to Suppress Women’s Writing, award-winning novelist and scholar Joanna Russ lays bare the subtle - and not so subtle - strategies that society uses to ignore, condemn, or belittle women who produce literature. As relevant today as when it was first published in 1983, this book has motivated generations of readers with its powerful feminist critique.

"What is it going to take to break apart these rigidities? Russ’s book is a formidable attempt. It is angry without being self-righteous, it is thorough without being exhausting, and it is serious without being devoid of a sense of humor. But it was published over thirty years ago, in 1983, and there’s not an enormous difference between the world she describes and the world we inhabit." (Jessa Crispin, from the foreword)

"A book of the most profound and original clarity. Like all clear-sighted people who look and see what has been much mystified and much lied about, Russ is quite excitingly subversive. The study of literature should never be the same again." (Marge Piercy)

What listeners say about How to Suppress Women's Writing

As plainly as the title suggests, Joanna Russ wrote to explain where to look for sources of suppression of women's writing. I strongly resonate with her observation of the double standards towards works of marginalized groups, especially, for example, the attack on their "promiscuity." I've also observed that, as she explained, women's writing are isolated and excluded from the history and tradition of literature. Importantly, I read this book as neither merely about women nor merely about writing. As Jessa Crispin said in the forward, of Joanna Russ:

"She understands how a fragile Self will need to define itself against an Other, and she is wise enough to see this is not an issue of misogyny per se but something that has the potential to infect us all. That need for the Other to be a specific something, so that in reflection the Self can be something better, creates a lens that makes it impossible to see the Other clearly without risking the Self. We can only see and judge art through this lens, unless we stubbornly refuse to."

This is not just a personal interpretation, as Joanna Russ clearly wrote in the last chapter:

"The other side of the nightmare is not that what is found in the "other" art will be incomprehensible, but that it will be all too familiar. That is:

"Women's lives are the buried truth about men's lives.

"The lives of people of color are the buried truth about white lives.

"The buried truth about the rich is who they take their money from and how.

"The buried truth about "normal" sexuality is how one kind of sexual expression has been made privileged, and what kinds of unearned virtue and terrors about identity this distinction serves."

The fear of these nightmares are, as she pointed out, "bad faith":

"To slide into decisions without allowing oneself to realize that one's making any, to feel dimly that one is enjoying advantages without trying to become clearly aware of what these advantages are (and who hasn't got them), to accept mystifications because they're customary and comfortable, cooking one's mental books to congratulate oneself on traditional behavior as if it were actively moral behavior, to know that one doesn't know, to prefer not to know, to defend one's status as already knowing with half-sincere, half-selfish passion as "objectivity" -- this great, fuzzy area of human ingenuity is what Jean-Paul Sartre calls bad faith."

These are, I think, among her the most important messages.

The book is relatively systematic and comprehensive, and full of clear demonstrations from (maybe a bit too many) examples and citations, although the subpoints within each chapter require some careful reading to sort out. Many of the points she raised in the book, such as her objection to what's considered "universal" and what's "regional," a criticism of the "objectivity" or the "normality" of certain standards, have become more or less widely known.

I had to check whether the book was being read by a text to speech AI. Pauses and beats in very odd places.