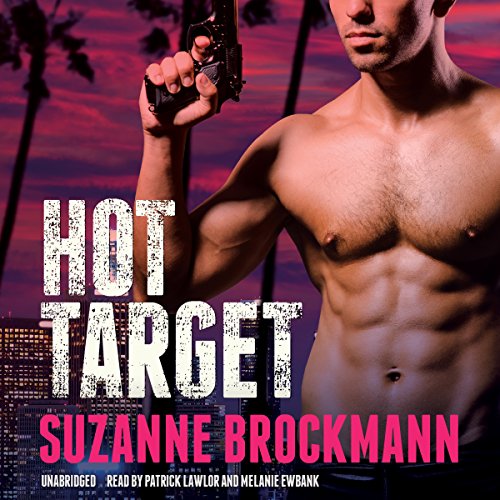 By: Suzanne Brockmann
Narrated by: Patrick Lawlor,Melanie Ewbank
Try for £0.00

New York Times best-selling author Suzanne Brockmann knows exactly what makes hearts race and pulses pound: peril and passion. No one succeeds more brilliantly at blending these exhilarating elements in breathtaking novels of men and women forced to grapple with the deepest emotions and the highest risks. And there's no better proof than Hot Target - which will thrill on every level.

Like most men of action, Navy SEAL chief Cosmo Richter never learned how to take a vacation. So when he finds himself facing a month's leave, he offers his services to Troubleshooters Incorporated. Founded by a former SEAL, the private-sector security firm is a major player in the ongoing war against terrorism and known for carrying out covert missions too volatile for official US military action. But Richter's first case is anything but under the radar.

High-profile maverick movie producer Jane Mercedes Chadwick hasn't quite completed her newest film, but she's already courting controversy. The World War II epic frankly portrays the homosexuality of a real-life hero - and the storm of advance media buzz surrounding it has drawn the fury of extremist groups. But despite a relentless campaign of angry emails, phone calls, and smear tactics, Chadwick won't be pressured into abandoning the project. Then the death threats come.

While the FBI appears on the scene, nervous Hollywood associates call in Troubleshooters, and now Chadwick has an army of round-the-clock bodyguards, whether she likes it or not - and she definitely doesn't. Her stubbornness doesn't make FBI agent Jules Cassidy's job any easier. The fiercely independent filmmaker presents yet another emotional obstacle that Cassidy doesn't need - he's already in the middle of a personal tug-of-war with his ex-lover, and fighting a growing attraction to Chadwick's brother.

Determined to succeed - and survive - on her own terms, Chadwick will face off with enemies and allies alike.

What listeners say about Hot Target

I’m an avid reader and listener, it’s not often I’m caught off guard by amazingly interesting characters. ALL of them! This is a great listen. Thanks to the author for writing it and the narrators.

This book is told from multiple male POVs, not the male narrator never changed his voice so it was confusing knowing whose part of the book you were in. Ruined it for me.

I love Suzanne’s Troubleshooters Series. Great for distracting from the pain during a run or the boredom while folding laundry. Voices are wonderful too! Please write more!!

Chief Cosmo Richter takes some leave to help his injured mom, but uses some of it to work a bodyguard job for Troubleshooters Inc.
J Mercedes Chadwick aka Jane is just trying to produce her WWII movie but has a stalker who has already killed once. Jules Cassidy of the FBI is also working to catch this killer; but when he goes to LA, he gets jerked around by his ex Adam, who wants a movie part.
Add in Jane’s brother Robin Chadwick who is so far in the closet that he won’t admit he’s gay or alcoholic. No matter what sparks are flying, Jules has had enough of them both and walks away.
Meanwhile, Cosmo and Jane find they have the ever after kind of compatibility.
Lawlor does a decent job of narration.
Ewbank’s voice is complementary.

This book was so good I re-listened to it after several months and found it just a good. Can't say that about many.

loved Cosmo. This was loaded with humor. Lots of interaction between all the characters. The suspense was well done. Hated when one of the characters lost a loved one!

great story really enjoyed but at the same time I had a hard time getting through it. I'm not against gays and lesbians but I definitely do not enjoy reading or hearing about it. I wish there was a warning.

Enjoyed another book from this author! She has a distinct way of combining romance, solid character development and suspense. At first it was distracting to have a male and female narrator doing both male and female voices but I got used to it. I think I've enjoyed this Trouble Shooter's series (Seal team 16) the most because I have listened to them in order which helps see how the life of the characters changes.

Too many “sub” stories

Was hard to follow with all the detailed “sub stories” of supporting characters. Had to go back and re-listen a couple of times because wasn’t sure who or what they were talking about.

Interesting story. Liked the character interaction and development. There were times when the story felt a little like it used a few too many tropes. Enjoyable, but a bit predictable. Great if you are looking for a sassy woman meets big tough man type of story.