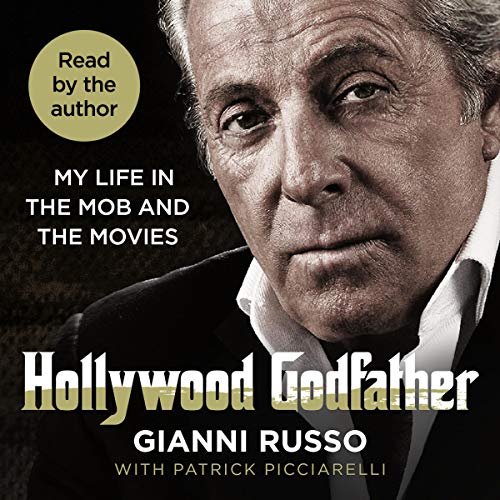 Gianni Russo was a handsome 25-year-old mobster with no acting experience when he walked onto the set of The Godfather and entered Hollywood history. He played Carlo Rizzi, the husband of Connie Corleone, who set up her brother Sonny, played by James Caan, for a hit. Russo didn't have to act - he knew the Mob inside and out, from his childhood in Little Italy, to Mafia legend Frank Costello, who took him under his wing, to acting as a messenger to New Orleans Mob boss Carlos Marcello during the Kennedy assassination, to having to go on the lam after shooting and killing a member of the Colombian drug cartel in his Vegas club (he was acquitted of murder when the court ruled this as justifiable homicide).

Along the way, Russo befriended Frank Sinatra, who became his son's godfather, and Marlon Brando, who mentored his career as an actor after trying to get Francis Ford Coppola to fire him from The Godfather. Russo had passionate affairs with Marilyn Monroe, Liza Minelli and scores of other celebrities. He went on to star in The Godfather: Parts I and II, Seabiscuit, Any Given Sunday and Rush Hour 2, among many other films in which he also acted as producer. Hollywood Godfather is his no-holds-barred account of a life lived on the edge. It is a story filled with violence, glamour, sex - and fun.

What listeners say about Hollywood Godfather

I saw Gianni Russo talking on YouTube and was impressed by his charm and his unique story.
He seems to be telling the unvarnished truth about a very interesting life. He has a lovely voice too so it was a pleasure to listen to.

Played an extra in The Godfather. That much is true! The rest of this book is nonsense. He watched the Godfather movies and made this stuff up. He was there when JFK and Pope JP the first got killed, he had sex with several Hollywood stars. It gets very boring.

He’s been involved in & with every major event in the 20th century, I think he’s embellished a perfectly interesting story?!

One of the best memoirs ever

I personally have sent the printed version to a few friends immediately after listening to this.

Hollywood Godfather did have the odd side effect of reminding me what is possible and what the “rules” are.

My only criticism is that the editing of the audiobook in certain parts may not play or sound correctly. Still curious to why Gianni had to leave the US. But bar those two minor criticisms.

This audio book is one of the best memoirs ever and Gianni’s voice is so perfect.

struggling with his less than humble personality throughout the book, all he seems to be found is either name dropping or how much things cost, or how big he's homes were.

Never let details get in the way of a great story

An entertaining and interesting story which would be a fact checkers dream to find out what the truth is.

Gianni..giving a truthful account of his.coming from "kid" into adulthood, itd.a.read.definitely with turns and twists and a.few.notable.characters, this guy Gianni Russo has lived.a.full tumultuous life. Grateful it's down.in.writing.
His reading it. Impeccable. Few memorable name drops.toboot, go to Gianni

I couldn't believe all the stories. According to him, he was everything, in everything , to do with everyone in the mob!....couldn't believe it I'm afraid...he recalls in great detail, conversations and events....none of us have that amount/level of recall...sounds like half truth and half make-believe

This is by far the best Hollywood book I’ve ever listened to. I must be the only person in the world that hasn’t even watched The Godfather. But this book had so much more than just about the film . Loved it.

Enjoyed every chapter. The author tells it best with his voice and real NYC accent. Just one thought for Mr Russo, how were you able to rekindle all that mental power needed each time, just to be able to ride out that amazing and some times scary roller coaster, your life decided to put you on? Hope you write a second one. Jeff