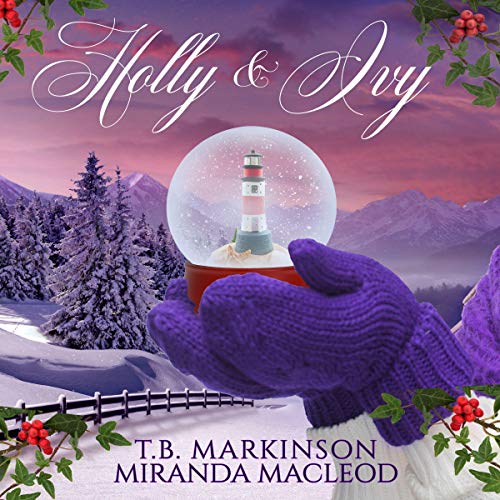 By: Miranda MacLeod,T. B. Markinson
Narrated by: Stephanie Murphy
Try for £0.00

The only thing harder than saving the world is doing it alone.

Holly Lovelace is a multimillionaire tech genius and the CEO of her own company. But if she can’t come up with a brilliant innovation and convince her investors that she’s back in tip-top shape by the end of the year, Holly could lose everything she’s worked so hard to build.

Ivy Winters is a social worker on an island that’s a vacation paradise during the summer months but suffers from a lack of economic opportunity and the scourge of addiction the rest of the year. When the promise of a huge grant falls through, Ivy loses hope of helping her community.

When Holly and Ivy meet, sparks fly, but it’s hardly smooth sailing. After their one-night stand ends in disaster, both decide they’d rather spend the cold months ahead sleeping alone. However, it soon becomes undeniable that each woman possesses something the other needs. Working together, they just might get what they want and find the love of a lifetime along the way, but only if their own insecurities and secrets don’t destroy them first.

Buy the audiobook to listen to this stand-alone romance novel that will make you believe love conquers all!

What listeners say about Holly & Ivy

the Holly and the ivy

with the talented Stephanie Murphy narrating, the first two chapters had the mcs sounding like lizzy from a woman lost, but the story unfolds to reveal thier own characteristics , do opposites attract? it doesn't matter as long as there is a spark/connection, and the spark is hot
with the supporting cast supplying humour, love, and support, this is a joy to listen too,
Happy holidays who/where ever you are.

This was very sweet and enjoyable. Holly, CEO of her own company and millionaire, is sent to an island by her best friend for her own mental heath. Ivy, Poppy’s sweetheart, meets Holly in her way to the island and from the moment they met, it’s a wild ride!

Another good collaboration from M.M & T.B. and an excellent performance by Stephanie Murphy.

Unseasonable but adorable gift to unwrap

There may be no christmas tree or snowflake anywhere in this story it is however an adorable listen that will leave you with a good heartwarming feeling in the end. Like unwrapping a little gift some of us shred through it and will adore the quick connection, whilst others will savour the following slow build connection between the main characters as well as the one with the island. Because the surroundings and it’s inhabitants did play an interresting role, atleast to me as a reader.

Holly Lovelace’s brain never stops thinking. It’s both a gift and a curse, as Holly can’t help thinking she should be able to do more to save the world. Being super smart also gives her an excuse for never taking any time for herself since she’s irreplaceable.

After she calls him in the middle of the night, crying and babbling that she just can’t do it anymore – a phone call she doesn’t remember the next day -, her best friend Nolan forces her to take a leave of absence and sends her to the house he inherited on King Popham’s (aka Poppy’s) Island, off the coast of Maine. Being the stubborn workaholic she is, Holly views her exile as punishment and isn’t prepared to give the island and its inhabitants a fair chance. As she waits for the ferry that will take her to what she sees as the middle of nowhere, she meets Ivy, whose truck broke down. Ivy is hot so she offers her – and her goat – a lift. Misunderstandings and bursts of lust ensue, resulting in a love story that manages to be both comedic and romantic.

Ivy is the island sweetheart, always trying to make life easier and better for the struggling families yet not conscious of how loved she is by them, how grateful they are. I was expecting Holly to be more of an ice queen, as a big-city tech genius millionaire, but she’s more socially awkward than icy. It’s that awkwardness that drove her to isolate herself from the rest of the world and focus on computers and apps, to the point of not being aware of the difficulties others face. Under Ivy’s influence, she’ll open her eyes and do better.

I always find it very interesting when authors get together to write a story. At first, I can’t help wondering who wrote what, but when it’s done well (as it is in this instance), you can’t really tell. At times I thought “Oh this is pure Markinson!” and then “Or maybe MacLeod?”. Their styles mesh incredibly well and they share a sense of humour that works perfectly with this story. I’m not big on bodily functions-based jokes, and there are quite a few in Holly & Ivy, but as they come from two of the funniest and clueless secondary characters I’ve read about in a while, I’ll give them a pass.

There’s nothing groundbreaking in this story, but every time I mentioned it while I was listening, I said: “it’s such a cute story!” It’s sweet, funny and heartwarming. And you can always count on Stephanie Murphy for a solid and lovely narration.

I loved the story. The story flowed very well and at a perfect pace. I loved how people from different backgrounds/status come together and how they work through their issues.

At one point, the main character refers to her friend as a boat capsizing. Not a vibe. Into the return pile.

Fat-shaming/body-shaming - I returned the book ASAP!

I didn’t get far before hitting a scene full of fat-shaming and commenting on a fat person’s body while the main leads a yoga session for her two friends. And this wasn’t coming from some awful side character we all hate together. It was written from the main POVs. Writing a story that doesn’t include parts that are at fat people’s expense is skill I truly hope these authors have the courage to acquire. That’s time I can’t get back. Sigh. I know I shouldn’t be surprised, but I am always so disappointed to find this stuff in this genre.

Kind of predictable. But a cute story none the less. Wish the sex scenes where more varied and steamy.

Tuck this one into your holiday or anytime listening list!

Look out! Miranda Macleod, the queen of lesfic romcom and TB Markinson, the mistress of steamy love scenes, have joined forces. I throughly enjoyed the sparks flying as these engaging women fall in love even while getting their wires crossed. And just for fun, there a pajama wearing goat doing yoga. Stephanie Murphy’s narration captures these quirky characters and enhances this terrific story.

I’m sure the story line is cute however you can’t follow it due to the same tone of the reader for all characters!!! It’s like I’m
In school again and we have to read out loud!!! All the other stories I have listened to has different voices for all characters this was very disappointing was excited to hear a Christmas story!!!

I really liked this! It took me forever to finish because of the way this year has been but I really enjoyed listening to this story

T.B. Markinson and Miranda Macleod make a great team! And Stephanie Murphy is absolutely fantastic bringing voice to it. My review won't do justice to how much I enjoyed it. It is absolutely worth the listen!

Adorable! A very fun read set during one of the best times of the year.

I absolutely loved this story. The characters were so well developed and loveable. Alongside the humour that was dispersed throughout the story, it had me laughing so much and I could listen to this again. The narration was perfect and this book is definitely in my top 5 favourites.

Beauty and the Geek

Love this story with each chapter switching to the opposite main character. This is a story of redemption for Holly along with a chance of lasting love for Ivy.
The narrator is perfect for the shyness and introspection of both main characters.
I have read the book several times and was thrilled when it finally came out on Audible.