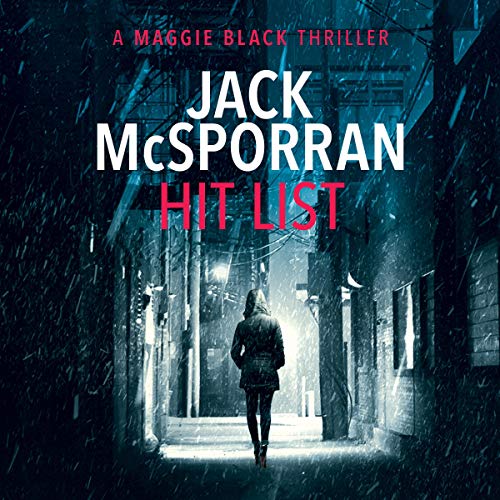 By: Jack McSporran
Narrated by: Lucy Brownhill
Try for £0.00

When her old agency is hacked by an elusive crime syndicate, ex-secret agent Maggie Black is enjoying the carefree life of a civilian. Then she learns that the names of the agency’s agents, past and present, are being leaked by the hackers, one by one until their notorious boss is released from prison. With the government refusing to negotiate with the blackmailers, she is forced out of retirement and dragged back into the perilous life of espionage she swore to leave behind. Her name is on that list, as well as those she cares about most.

As the bodies of agents begin to pile up, Maggie risks it all to hunt down the hackers. From the war-torn streets of Somalia to the seedy red-light district of Amsterdam, she must race against time before her dark past ruins any chance at a future.

This book was very good!

This was a great story and story line and plot. I really enjoyed it. Lots of action, bad guys kicking butt and is non-stop. Always something going on.

I really like Maggie Black and all the secondary characters, especially Ashton. Great Series so far and I am looking forward to the next book.

As for the narration its great! Lucy Brownhill does a fantastic job on all the voices and accents. She does a great job with the male voices too. Great reading voice and reads with emotion.


Wow! I finished a Gray Man book today and listened to this one, all in one day. Amazing what you can do while you’re doing a hobby you love and listen to Audible at the same time. AND both books were on human trafficking. They were both very good too.

This was the second book in the Maggie Black series. Now, this is a gal that can kick your ass. And that’s one of the things I liked about her. I also liked Leon, and the funny Ashton. And I was glad Grace was okay, and the bad guys were all arrested. I cant wait for the third book, due out in May.

There was off page sex between Maggie and Leon and the F-bomb was used 4 times.

As to the narration: Lucy Brownhill did another great job on the voices and emotions in the second of this series.