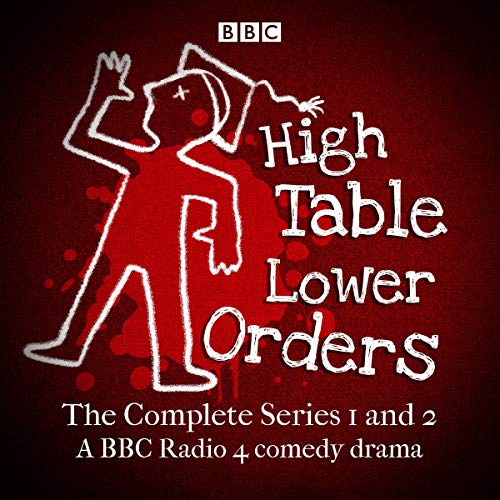 When prominent don and celebrity TV historian Peter Devanti dies after dining at High Table, his colleague Gilbert suspects foul play and invites his former student Simon Harrison, a disillusioned health and safety officer, to investigate. Meanwhile, Simon’s former girlfriend Zoe, a freelance journalist, arrives to write an article about Devanti’s death, reopening old wounds for Simon. After another college member dies, more skullduggery is uncovered, and Simon must find out which of the many suspects is a murderer - while also trying to get back with Zoe and keep his day job....

A year later, the college is recovering from the Devanti affair but struggling for cash and riven by arguments between traditionalists and modernisers. Simon, now bereft of a job, jumps at the chance to become a don - but soon finds himself embarking on another murder investigation after a student is caught cheating and his accuser is found hanged. Can Simon unmask the killer before they strike again?

Written by Mark Tavener (In the Red, Absolute Power), this brilliant black comedy stars Geoffrey Palmer as Gilbert, Samuel West as Simon and Sharon Small as Zoe, with Rebecca Front as Patricia, Michelle Fairley as Roisin, Michael Maloney as the Dean and Jonathan Coy as Bernard.

What listeners say about High Table, Lower Orders: The Complete Series 1 and 2

Enjoyed it more than I thought I would.

Excellent performances especially from Geoffrey Palmer.
Only let down was Sharon Small’s accent.
Good stories interesting enough to keep you listening.
The tension between the Dean and the Master is very well done.
Stories a bit odd in so much as the crimes are interwoven so much in other threads of the story that you barely notice them.
Good light hearted entertainment- not laugh out funny but amusing.

As an avid listener to Radio 4 when this and George Cragge were aired, what an incredible pleasure to hear it again. As a previous Cambridge resident, in the 80's ~ a pure gem of academic macheivellinism. Thoroughly recommend

P.G.Wodehouse for a new generation, a joy!

The story takes second place to the wonderfully acerbic dialogue. I was grinning from start to finish. If P.G. Wodehouse wrote Inspector Morse it would have been close to this.

could not finish, sad because it could have been so much better without the interruptions, it was like having adverts without the advert. the story was let down.

The cast are excellent. The stories less so. It’s pleasant enough and really well acted but wouldn’t listen to more series.

Well written, very clever gags, predictable plot but do not let that out you off, it is a good listen

I only wish there were more like this; witty, clever, the right length, set in an upper class Cambridge College the rhetoric almost believable!

A deliciously devilish satirical comedy drama. It's well written and has a brilliant cast who bring the stories to life. Light-hearted and amusing tales.

I spent 35 years as a university teacher and administrator, two years of which at a university in the UK. As Sayer’s law suggests: ‘University politics are so vicious because the stakes are so low.’ “High Table, Lower Orders” captures this with searing wit and deadly accuracy! Alpha Plus, Plus!

What wonderfully clever and entertaining stories! I thoroughly enjoyed the wit, sarcasm and all to lovable and the not so endearing characters! The stories in themselves were great but the performance brought them to life in a way that painted an incredibly vivid picture of the characters and their struggles. I would recommend this audio book to anyone who enjoys a smartly written whodunnit with a big dose of British humor!

Not gripping mysteries but the academic background is amusing enough to keep listening. Would have liked to hear more.