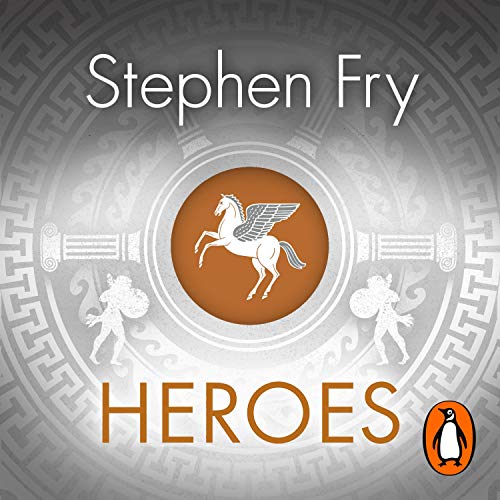 Enter the monstrous and magical world of Stephen Fry's Sunday Times best seller Heroes, brought to you by Penguin.

Shortlisted for the 2018 Specsavers audiobook award.

Imagine sandals on your feet, a sword in your hand and the hot sun beating down on your helmet. Enter the world of Stephen Fry's Sunday Times best seller, Heroes.

Few mere mortals have ever embarked on such bold and heart-stirring adventures, overcome myriad monstrous perils, or outwitted scheming vengeful gods, quite as stylishly and triumphantly as Greek heroes.

In this companion to his best-selling Mythos, Stephen Fry brilliantly retells these dramatic, funny, tragic and timeless tales.

Join Jason aboard the Argo as he quests for the Golden Fleece. See Atalanta - who was raised by bears - outrun any man before being tricked with golden apples. Witness wily Oedipus solve the riddle of the Sphinx and discover how Bellerophon captures the winged horse Pegasus to help him slay the monster Chimera.

Filled with white-knuckle chases and battles, impossible puzzles and riddles, acts of base cowardice and real bravery, not to mention murders and selfless sacrifices, Heroes is the story of what we mortals are truly capable of - at our worst and our very best.

"A romp through the lives of ancient Greek gods. Fry is at his story-telling best...the gods will be pleased." (Times)

"Assured and engaging. The pace is lively, the jokes are genuinely funny." (Guardian)

"An Olympian feat. The gods seem to be smiling on Fry - his myths are definitely a hit." (Evening Standard)

What listeners say about Heroes

Ancient Myths from a Modern Legend!

This is an audiobook that I simply can't recommend enough. One of British entertainment's legends in Stephen Fry dusts off these ancient tales and breathes a contemporary form of life and colour into them in his own unique style. It's a mixture of description, a little conjecture and of course the lion's share being taken by these grand old tales themselves. They take front and center stage and while Fry cleverly interweaves background and information it never feels like anything other than being told an engaging story. Of course being Stephen we also get charming nuggets of etymology thrown into the mix as well.

Using a fairly informal, almost irreverent approach, for example he pronounces the names of people and places as comes most easily to him, Fry brings these stories to life like few others ever could. The Gods, heroes and of course villains are given an often-missed humanity and character that is both charming and humorous.

In fairness, although clearly a lot of personal research went into these re-tellings it's neither a comprehensive collection, more of a Greatest Hits if you will, nor is it a hugely scholarly work. However, if like me you mainly have a passing knowledge of the Greek Myths or you want to dip your toe into them for the first time this is a fabulous place to start.

My favourite has always been Jason and his Argonauts ever since watching Don Chaffey's 1963 film as a boy. Even with this one though, the one that I'm most familiar with I learned more about the back story and how the plot developed and has been toyed with than I ever have before. Then, right at the end Stephen describes "Mythos" as a trilogy which I wasn't aware of so hopefully to match his shows there will be one more of these which will cover the Trojan war and its aftermath. I can't wait!

So, if you want to spend some time listening to a modern legend breathing life into ancient myths, this is very much the right series!

Mythos was my first audiobook and was in many ways the perfect place to start. Heroes was my second audiobook and for some reason the creators didn't see fit to carry over the use of chapter titles or book sections which were so helpful in the first book. I don't really understand it as it can't possibly require that much more work just to denote each chapter with a title rather than a number. It, unfortunately, discourages relistening to the book and is in many ways more necessary in this second book as the stories unfold separately following different heroes and is less chronological than Mythos. My hope is that this will somehow at some point be fixed and that they return to chapter names for the third book. If all you care about it the story then, by all means, go ahead and buy this audiobook, i just felt i would voice my opinion on this small point of criticism.

I love Stephen Fry and I loved Mythos.
However the accents for the characters in Heroes are so off putting.
The young Perseus sounds like a cast member from Last of the Summer Wine.
Then the Irish and the Welsh etc etc. Really made it hard for me to finish this one.

The stories are all great and it truly feels like a sequel to Mythos. I just should've read it.

WOW!! Totally worth it

Amazing book with fantastic stories and my I say Mr Fry, what a story teller he is perfect in everything and I definitely suggest mythos

Stephen Fry makes Perseus sound like the village idiot...His story telling is first class, his accents ruined it for me.

I love the stories from Greek mythology but I can’t help but feel underwhelmed with this one. I agree with others that are unhappy with the accents chosen for a lot of the characters. Also, I just couldn’t loose myself in some of the stories like I usually do... and the omission of the Trojan war was annoying - I can only hope this huge tale has been left so we can do a whole book on it!

Accents ruined it. Mythos was great with Stephen Fry voice just as it is, sorry but stories were ruined. Not for me I’m afraid.

The heavy Irish and Scottish accent is overdone

I feel like I'm listening to an afternoon radio drama. All the high pitched squeaking and thick Irish accents does not make a good Greek mythology reading/listening.

Not a patch on Mythos

The bizarre decision to put such awful accents to the characters made this audio book almost unlistenable. I have enjoyed all of Mr Fry’s audio books save for this one.

great listen though overacting at points

enjoyable and very entertaining take on the Classic greek myths, though some of the accents are a bit much (Greeks are Welsh, Irish and Scottish? I am greatful to know Perseus is from Yorkshire!) recommended regardless!

Truly enjoyable, both the story and the narration are perfect. This book goes deeper and more detailed into ancient Greek stories than any other book I've ever read. Surely recommend to anyone interested in Greek mythology.

Both the story and narrative are excellent! It was a very special experience to revisit the ancient Greek universe. I wish Stephen Fry could have been my history teacher. And English teacher. And art teacher. And... well, you get the idea

An engaging continuation of Mythos

This book's subject is the lives and deeds of Greek heroes. The narration is (as always) brilliant, and the plot is most engaging. Recommended to anyone struggling with original Greek sources on heroes but interested in Greek hero myths. The stories are spiced with humour and drama but remain faithful to the original. Fry sometimes offers insight into how different heroes reflected changes in Greek society over time.

Stephen Fry’s telling of the quests and sometimes unfortunate adventures of Greek Heroes and Demi-gods is unlike any other in the category. Whilst not a comprehensive collection of scholarly work, these tales are filled with a brilliant balance between wit, humour and mythology, as well as a perfect performance from Fry himself.

Found it fascinating to listen, put a slot of colour to the stories I have read and heard on Greek myths.

Stephen Fry is my hero

Great story telling and beautifully read. Mr Fry continues to entertain the listener or reader with his enthusiasm and knowledge.
Many thanks.

Stephen Fry has got one of those honey-gold voices I just want to distill and pour directly into my brain. If ever there is one human being on this planet who is so overwhelmingly talented and absolutely fabulous, and who deserves every honour accorded to him, it's this man. And the audiobook for Heroes further underpins my opinion about Stephen Fry.

Anyone who's worth their salt in terms of languages and literature should have at least a passing familiarity with the Greek myths. I had a module at university that focused primarily on the mythology, so I was treading familiar territory when I gave Heroes a whirl. And while a bewildering array of gods and goddesses, nymphs and monsters feature prominently in this hefty tome, it's the heroes who are, ahem, well, the heroes of this book. Well, duh.

From Jason and Perseus, to Atalanta and Hercules, we follow a bunch of ancient Greek luminaries on their quests for golden fleeces, the slaying of terrible monsters, and a quest for power and glory. Fry delivers the tales of derring-do, wonder, and tragedy all with his singular wit and fantastic sense for the dramatic. If you've ever encountered anyone who's complained that reading the primary sources is dull, the rather put them onto Fry. You'll thank me later, and if anything, this might yet inspire folks to dip into the original texts.

The old Greek myths have it all – epic quests, tragedies, dramatic love affairs, adventures, horror. In fact, I'd hazard to say, that modern fantasy fiction owes a vast debt to these great classics. And it's been a special treat to have them brought to life by the author himself. I could probably carry on heaping praise on this book until the cows come home to roost, and I'm most certainly going to pick up the rest of the titles in this series that Fry has been working on.

I wish it would never have ended. Can you dig up some more Heroes for us?

Very engaging and well compiled. Good storytelling with lots of enthusiasm! I enjoyed it very much.