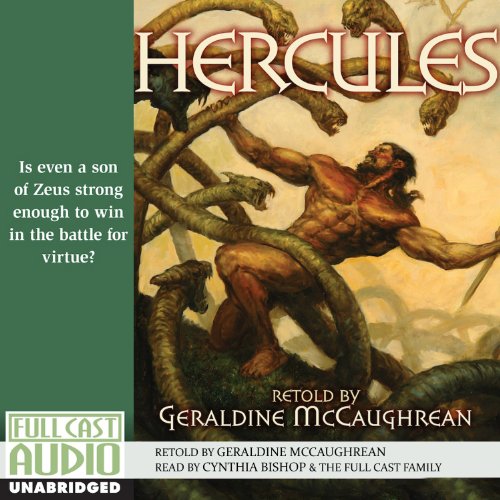 By: Geraldine McCaughrean
Narrated by: Cynthia Bishop
Try for £0.00

When the goddess Hera, wife of Zeus, discovers her husband's mortal son, Hercules, she vows to destroy him. Thus begins Hercules's legendary and epic journey, in which he is forced to take on a series of seemingly impossible tasks. He battles an array of both amazing and terrifying beasts, including the mighty Cretan Bull, the many-headed Hydra, the ferocious Nemean Lion, and the three-headed guardian of hell, Cerberus. With the help of the gods Athena and Apollo, can Hercules triumph in the end?
©2003 Geraldine McCaughrean (P)2008 Full Cast Audio
Geography & Cultures Classics
Show More Show Less

"Such vivid writing will hold the attention of anyone already interested in these ageless legends, and teachers could well ignite students' appetites for the tales by reading passages aloud." ( School Library Journal)

What listeners say about Hercules

A must read , so much misinformation about the Greek heroes because of TV and movies. Glad to finally have a good fundamental understanding of this character now.

Not your typical audiobook.
Left at times wondering how story tracked real story.
A little investigation reveals it seems to track story of Hercules.

What a great listen this story of Hercules would be perfect for road trips with the children. Adults and children alike will enjoy these fun tales with over the top acting and character voices.