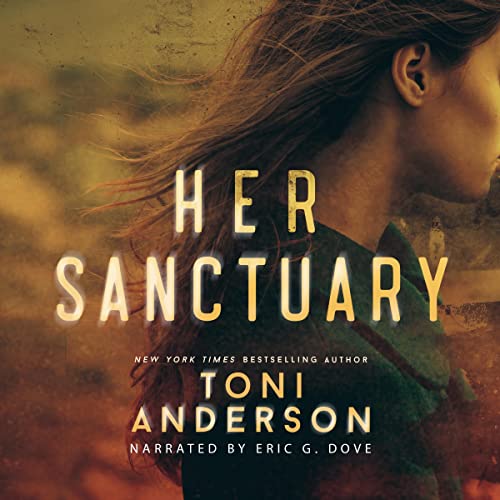 Running for her life, ex-FBI agent Elizabeth Ward escapes to Montana with a new identity. She craves peace and solitude, but instead finds handsome rancher Nat Sullivan. Nat is trying to hold his ailing family together while struggling to keep the ranch from bankruptcy. The last thing he needs is a beautiful stranger reminding him there is more to life than work. But Elizabeth isn't what she seems. And when a murderer and rapist track her down to the remote ranch, they all find out about the power of revenge.

Revenge or redemption. Which would you choose?

What listeners say about Her Sanctuary

A great storyline and wonderful characters. Full of drama and suspense and intrigue. Can’t wait to read the next book now

I love a good romantic suspense with strong heroines. Toni Anderson delivers again!
A good start to the series. I'm looking forward to listening to the next in the series.

Her Series Book One

Her Series Book One.

Elizabeth Ward is on the run from the mob. More specifically, Andrew DeLattio, the man she was assigned to date as an FBI agent. With his trial date looming, DeLattio is determined to kill the girl who screwed him over. As Eliza Reed, Elizabeth goes into hiding at the ranch of Nat Sullivan. The two are suspicious of each other from the start, but they soon grow to trust each other.

If you're looking for a quick romantic suspense with ranchers, mobsters and FBI agents, this is the book for you!

Audio Review:
Eric G. Dove has a way of narrating that is understated, but allows the emotions and characters to shine through. He doesn't overact or blandly read the story, but has a balance between the two.

I love Toni Anderson’s books but I do find myself skimming a lot, always searching for something better than descriptions of the great outdoors. Overall, though, it was exciting most of the way through. Great mystery/murder/suspense and romance.

I liked Eliza but she was soooo jumpy. I’m surprised she didn’t kill someone innocent. I liked Nat, too. His concern about keeping the ranch and taking care of his family was simply great and the way he began to care for Eliza was wonderful.

I also liked that the time and place was changing now and then, telling about what Marsh (FBI) was doing, and what DeLattio was planning for Eliza. Wow, he was one evil and murderous dude.

A great read about an ex-FBI agent hiding from a killer and all she did to stay away from him until she decided to take a stand. Well, they ALL took a stand.

I did like the other players, too: Marsh, Sas, Ryan, Cal, and Josie. I’m looking forward to the next book because it’s about Marsh and Josie.

There was explicit sex in this and the F-bomb was used 25 times.

As to the narrator: What can I say? It was narrated by Eric Dove, and he’s fabulous, his voices and emotions make listening to him a real treat.

Too Much Small Detail

I have read many of Toni Anderson’s books and loved them. As usual, Eric G. Dove gave a solid performance. For the first time, I didn’t even finish it. It was sooo bogged down with extremely small, useless, descriptions. I just couldn’t do it.

I like the narrator and Toni Anderson is one of my go-to authors but this book, storyline, and the characters were so boring or irritating. I only held out, hoping it'd get better. it didn't. I also hope it would be a new series I could get into. If the rest are like this then nope.

Not this authors best work, The story had potential to be good, but didn’t turn out that way. I will proban

So many good things to say about this audio book. I love this narrator and I love this book.

This is the first book that I ever listened to by Toni Anderson. The story and characters involved was really well written with suspense, love, a few laughs, and tears. The audio narration of each character was done beautifully.
The characters came to life off the pages each with their own stories of life's struggles. The descriptions of a working Montana horse and cattle ranch sounded so real, it felt like i was there with the characters. (Just minus the really cold blistering winter chill.)

I listened to the entire story without wanting to put my kindle down.
.
Thank you to the author for a truly entertaining story. I truly enjoyed it.
Can't wait to listen to the next book in this series. Also, you picked the perfect narrator. Aloha Kat

After listening to Her Last Chance, the second in this series (yes, I read series out of order, all the time), I wanted to listen to this one. Nat Sullivan is a different kind of romantic hero than Marsh Hayes, and Elizabeth Ward is likewise a very different person than Josephine Maxwell. Once again, though, we have two strong, determined characters who don't quit in the face of trouble and danger.

The events of this book are hinted at in its sequel, but here we get the full account--Elizabeth and Nat's story, but also the missing bits of Josie and Marsh's story. Elizabeth and Nat are the main event here, though, and we follow the terrifying events that bring her to the Sullivan ranch, under a false name, in hiding from the mafia.

Nat's family faces its own serious challenges. A year or two ago, everything was looking great. Nat made good money as a nature photographer; they had plans to make the ranch into a stud farm, and to take in paying guests.

Then his father got sick. His illness and death ran up medical bills that nearly bankrupted them, and now they're struggling to keep the ranch at all. Elizabeth, under her assumed name, is their first paying guest, and there's a neighbor who wants to use their money crunch to force them out, for reasons that gradually become clear. Nat's mother, Rose, is also dying, of heart disease, and younger brother Ryan is a single father grieving the death of his wife. Their sister Sarah is a doctor, working at the local hospital, and a solid, kind, generous person.

Elizabeth quickly comes to care far too much about these people, and dreads bringing her mob pursuers down on them. The more she comes to care about Nat and his family, the more she knows she needs to leave.

Meanwhile, her FBI colleagues, led by Marsh Hayes, are hunting for her, too, disagreeing with her theory that she's safer if even they don't know where she is.

Once again, Anderson gives us smart, tough, vulnerable human beings, both men and women, who don't always make the right choices, but whose choices are grounded in decency and kindness. It's a very solid romantic suspense story, and you won't regret the time spent with these characters.

I bought this audiobook.

This book is really good

I really enjoyed this book. The narrator was good.
Elizabeth is a former FBI agent is running from a man who raped and beat her. Her former boss is trying to find her to help her as her attacker is trying to track her down.
I loved how things turned out. I don't want to give away the story so just know that it will keep your interest.
I received this book in exchange for an honest review

I purchased this book after I got the next book free from the author for a review. I loved them both. The story lines are great. I loved how the narrator performed. Very well written, lots of ups and downs. Sassyness and humor. I hope you enjoy it as much as I did.