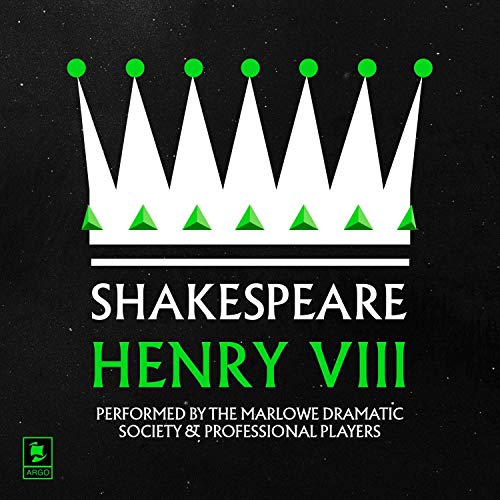 William Collins Books and Decca Records are proud to present Argo Classics, a historic catalogue of classic prose and verse read by some of the world’s most renowned voices. Originally released as vinyl records, these expertly remastered stories are now available to download for the first time.

‘Of all losses, time is the most irrecuperable for it can never be redeemed.’

Shakespeare's Henry VIII is a story of a ruthless race to power and the desire for an heir.

King Henry VIII listens to Cardinal Wolsey too much and gives him power, which the cardinal uses to convict a duke of treason. Henry meets Anne Boleyn, divorces his wife, Katharine, and marries Anne. Anne gives birth to Princess Elizabeth, who the archbishop prophesies will become great.

All of the Shakespeare plays within the Argo Classics catalogue are performed by the Marlowe Dramatic Society and Professional Players. The Marlowe was founded in 1907 with a mission to focus on effective delivery of verse, respect the integrity of texts and rescue neglected plays by Shakespeare’s contemporaries and the less performed plays of Shakespeare himself. The Marlowe has performed annually at Cambridge Arts Theatre since its opening in 1936 and continues to produce some of the finest actors of their generations.

Thurston Dart, professor of music at London University and a fellow of Jesus College Cambridge, directed the music for this production.

What listeners say about Henry VIII

volume of the voices and music flixuate 2 much

The volume of the voices and music flixuate so much that I could not set a comfortable volume. Either I could not hear what was being said or my ears were being blasted by sudden loud music. I gave up. I couldn't finish it