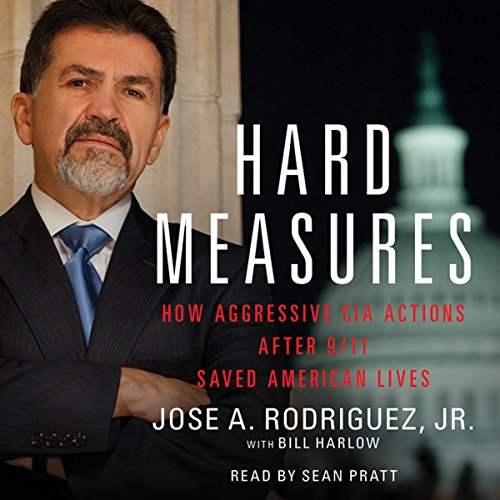 From a top-level operative in the counterterrorism unit of the CIA comes an explosive memoir about the behind-the-scenes fight against Al Qaeda after September 11.

Since the death of Osama Bin Laden, interest in counterterrorism is at an all-time high. Most people don’t know that Bin Laden’s death was the culmination of years of covert operations and tactics largely overseen by Jose Rodriguez from 2001 to late 2007 and built on by his successors.

Like a real-life Jack Bauer from television’s 24, Rodriguez’s sometimes controversial tenure as Chief of the Agency’s Counterterrorism Center involved CIA officers capturing and detaining key senior Al Qaeda operatives and implementing Enhanced Interrogation Techniques, tools which were an integral part of the War on Terror but are no longer available to those fighting America's fiercest foes.

Born in Puerto Rico and raised in Columbia, Bolivia, and the Dominican Republic, Rodriguez shares his unlikely journey from law school student to CIA recruit and finally, at the end of a 31-year career, to being America’s top spy. Rodriguez sparked controversy and a three-year investigation by his decision to order the destruction of videotapes showing CIA officers conducting harsh, but what he describes as “legal, necessary, and effective interrogation[s]”.

Riveting and timely, Hard Measures also examines how the current political climate and resulting policies have negatively impacted the CIA’s efficiency - even taking away the mechanisms that made feats like the successful Bin Laden operation possible.

"Jose Rodriguez guided some of the CIA's greatest counterterror victories, and his story is one of courage, commitment, and decisiveness. In this book, he provides concrete details about the value of the Agency's interrogation program of terrorists - a program which thwarted terrorist attacks and has made America safer." (General Michael V. Hayden, USAF [Ret.] Former Director of Central Intelligence)

What listeners say about Hard Measures

Small update at the end was interesting.

I'd love to hear his thoughts on the orange dictator trying to break the democracy this man worked for.

A moving book from a patriot and professional Spy

Very detailed book by a CS or Spy within the DO and later CTC
The book is simply amazing, and goes through great detail on the psyche of the CIA CT efforts - remember it is really a HUMInT agency, so CT was only 10-20% of its output. Jose acted as a true spy and shadow warrior. He was treated like crap by the bureaucracy. He was the man who took the decisions that others didn’t want to. A typical spy, that is, someone who has no time for Bullshit but who is very very intelligent. Jose wherever you are; I salute you. Thank you for your career. And I wish you and your wife all the best. And thank you to CIA for allowing this through, and for all your efforts. 5/5 is too low. It was a superb read. The ending was very moving.

realistic, not over sensationalist. Does not give a huge amount away. I found it interesting.

Less than 15% of the 900+ books in my Audible library are non fiction, yet more than 15% of my reviews are of non-fiction books. My issue with this book is I'm uncertain how much of it is true and how much, if any, is self serving fiction. The book was released 3.5 years ago and it is among the long since listened to audiobooks in my Audible library.

As ex-chief of the CIA's Counterterrorism Center Jose Rodriguez certainly has the CIA background and first hand experience to write this book. On balance I am inclined to view Hard Measures as a factual recounting.

In any case, Hard Measures is a very worthwhile, even necessary, listen. Rodriguez's justification for aggressive interrogation techniques is especially worthwhile. Rodriguez is a true hero and his story needed to be told to the US public. I do not detect a political slant.

One of the best books on the war on terror!

This is by far the magnum opus of terrorism history books. You can't get any more direct than from the man who ran the Counter-Terrorism Center for the CIA. Most of the books I read (or listen to) are pretty good. But this book is great, in fact, it's perfect. I was very sad to hear it end.

It's because of men like Jose Rodriguez, that I am able to sit inside the US and write this review. Thank you to such a great American hero.

In addition to this book, I highly recommend Marc Thiessen's Courting Disaster book.

Not politically slanted as I expected

If you could sum up Hard Measures in three words, what would they be?

The author explained the process so precisely & gave the reader the best understanding of the motives and logic behind the decisions that are used within the intel community to keep our citizens safe. I trust now, even less than I ever have, the media for taking the work of these individuals so far out of context. The sad thing is, so much has been revealed as a result of the fact that the CIA had to defend themselves that we may less safe as a nation than before this issue was raised.

What does Sean Pratt bring to the story that you wouldn’t experience if you just read the book?

That the folks within the Intel Community are humans too!

How blatantly un-American our Liberal media has become.

Very definately worth the time to read/listen!

That's a story that needed to be told!

Written by a person who led the interrogation of some of the worst terrorists....and he justifies the treatment those killers deserve!

Truth beyond media and politics

What made the experience of listening to Hard Measures the most enjoyable?

The book was well written.

How the slanted news media twisted truth to further their discrediting of G. W. Bush.

He spoke very well making the book more enjoyable and presented the author in a personal light.

No. It did make me frustrated at how politics and the news media work to paint a patriot in the most negative light by using lies. Truth is not what they are about. We really can't believe anything they say because it is filter through their politically slanted pen.

To Set the Record Straight

Jose Rodriguez, a 25-year veteran of CIA undercover operations, sets out in Hard Measures to describe the agency’s response to 9/11. The result is an informative, insightful, entertaining and worthwhile read. The strength of the book is in the personal memoir-like insights which bring readers as close to the feel of what took place as possible without revealing state secrets. Readers may disagree with Rodriguez s analysis or find fault with his point of view, but each page brings detail worth considering. That said, I think that the book s subtitle, How Aggressive CIA Actions after 9/11 Saved American Lives, is a little misleading. The book fulfills that aim, but to me the book s true focus is on defending Rodriguez s work while at the CIA during that era. Rodriguez was a controversial person at the CIA and he justifiably seeks to set the record straight. The chapters making his case do not detract from the entire volume nor should it discourage readers from taking up the book. Rodriguez has done a great service by leaving his memoir-like insights behind for all to see. The reading of Sean Pratt is excellent. There is an afterward presented by Rodriguez in person.

The author, in a way that reminds me of John Mcain in his autobiography, is ready to question everyone else's integrity and decisions but never his own. the lack of self criticism takes away from this book. also the bitching about the FBI is pretty tiresome at times

Would you be willing to try another book from Jose A. Rodriguez? Why or why not?

Would you listen to another book narrated by Sean Pratt?

Yes. Not outstanding but he settled in to his narration and didn't show off or impose himself

Did Hard Measures inspire you to do anything?

There are some really interesting and informative sections but Jose spends a little more time than i think he should have done on some pretty uninteresting bugbears he has. It's his autobiography so of course he has the right but if you, like me, are more interested in the job than the man yo might want to skip some sections.

What did you love best about Hard Measures?

It told how water boarding works, how often it was used after 9/11, and the kind of information that resulted. The media missed most of the main points here.

What was one of the most memorable moments of Hard Measures?

The press criticized the process saying that most of the useful information gained happened after the water boarding stopped when that is how it is supposed to work.

What does Sean Pratt bring to the story that you wouldn’t experience if you just read the book?

He did a fine job. He keep me interested the whole way.

Where does Hard Measures rank among all the audiobooks you’ve listened to so far?

What other book might you compare Hard Measures to and why?

Well written and delivered by a great narrator. I found it to be informative and enjoyed the revelations of his work within the CIA as well as a few details concerning his personal life.