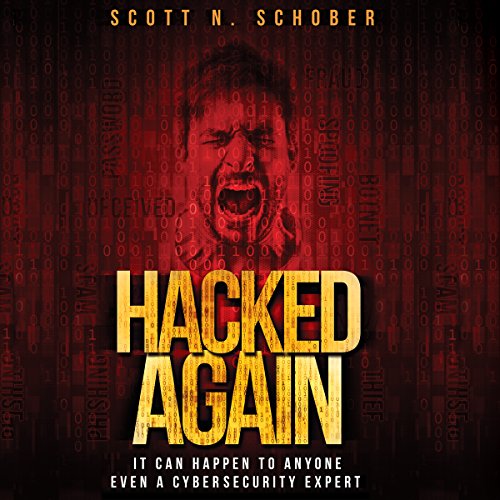 Hacked Again details the ins and outs of cybersecurity expert and CEO of a top wireless security tech firm, Scott Schober, as he struggles to understand the motives and mayhem behind his being hacked.

As a small business owner, family man, and tech pundit, Scott finds himself leading a compromised life. By day, he runs a successful security company and reports on the latest cyber breaches in the hopes of offering solace and security tips to millions of viewers.

But, when a mysterious hacker begins to steal thousands from his bank account, go through his trash, and take over his social media identity, Scott stands to lose everything he has worked so hard for.

Amidst the backdrop of major breaches, Scott shares tips and best practices for all consumers. Most importantly, he shares his own story of being hacked repeatedly and how he has come to realize that the only thing as important as his own cybersecurity is that of his readers and viewers.

What listeners say about Hacked Again

Sorta interesting but a bit boasty

He spends just as much time boasting as he does giving advice. Its in a way too ego and an advertisement of his company. Despite his efforts to sway you otherwise.

It's always refreshing to hear actual examples of hacks that have occurred and why, since these are often covered up. One real life example is worth a hundred vague suggestions

Hacked Again is easy to digest and understand. The author, Scott, recalls his own misfortune as a victim of hackers. Scott is a cyber security expert (yes, that's right, they get hacked too) and shares a wealth of knowledge that may be used as valuable security advice for both your personal or business information.

I thoroughly enjoyed the stories shared and certainly follow some of the advice myself. This is a book I will happily return to.

Something Everyone Should Hear

What did you love best about Hacked Again?

Scott Shober's hacked again was very well written and the narration on the audible version was equally was great. The book goes over the very basics of modern security such as how not to write a password before going into more advanced topics and describes some infamous hacks and how they could have been prevented. The book seems to be targeted toward mainly toward business owners, but I highly recommend this to anyone using modern technology.

stories from the front line

Mr. Schober writes from being there on the front lines of cybercrime fighting. Thrust into this role by the criminals themselves, he tells the tales in a language that is technical and accessible to those outside the tech field. These firsthand accounts are a great example of what is really going on. It also contains proven techniques to protect the average person from becoming another cybercrime statistic.

What did you love best about Hacked Again?

This book is a great overview of the fundamentals of information insecurity and the supernumerary threats we face today. You'll gain vital insights into how to defend yourself & your organization in simple, easy to understand terms. Scott succeeds at demystifying the complexity of these vital infosec issues we all face every day. A recommended read for all!

I highly recommend this book to anyone wanting to understand the complexity of these vital infosec issues we all face every day.

Would you listen to Hacked Again again? Why?

I would listen to it again to fully digest all the little tips that are mentioned at the end of each chapter.

no characters to speak of.

This is the first time that i have heard a book narrated by John Pruden and his performance was perfect for the subject matter and made some of the more technical stuff easier to listen to.

Scott N Schober has been brave by admitting that his company was hacked more than once considering the business that he is in. Some of the information and advise may seem obvious but judging by the amount of people that are hacked every day this information is often ignored and people need to take note. I was a victim of account hacking on my PayPal account a few years ago and can relate to the hassle of getting your money back.Since then i have always changed my passwords but now will start layering my security as per the advise in this book. I would recommend this to anyone with a gadget that connects to the internet as you can never be too safe can you!!!!!!

Great perspective for the uninitiated.

What made the experience of listening to Hacked Again the most enjoyable?

Hacked Again is an easy listen that will resonate most with individuals not deeply familiar with cyber security. For that audience, the book provides excellent insights and advice that will clearly help people to take steps to secure themselves online. Scott’s use of personal examples, including the sharing of cases where he himself was hacked, is compelling. More awareness of these risks and how to manage them is needed, and Scott’s book helps to fill this gap.

Conversational security for the masses!

What made the experience of listening to Hacked Again the most enjoyable?

This extremely informative book is well-presented and easy to follow. The information provided was very conversational, hence the headline of this review. So much in fact, that as a security professional myself, I caught myself a number of times talking to the car stereo, seeking to expand upon various topics with real-world relevance to not only my professional life, but my personal experiences with identity theft as well.

Scott Schober's character is presented in such a manner that I the listener could really relate to the frustration of being "Hacked Again"!

John Pruden gives a masterful performance. He artfully convey's the essence and message of the story, while adding dramatic flair and genuine emotion to a story that needs to reach a large audience.

Great story, great listen and definitely a great presentation of security for the masses!

Yes, I would recommend this book to friends to help them understand how to keep their accounts safe online. This book tells more about a security business that is exploited several times and while they are a bigger target everyone should be careful.

What other book might you compare Hacked Again to and why?

It's comparable to The Art of Deception, The Art of Intrusion, Ghost in the Wires (all by Kevin Mitnick).

Yes, If I could have listened in one sitting I would have.