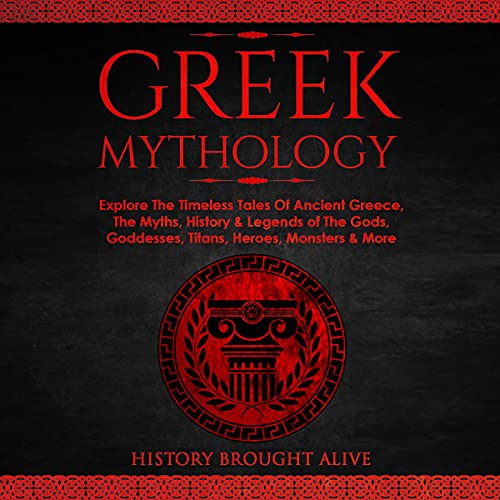 By: History Brought Alive
Narrated by: David Piper
Try for £0.00

"Chaos was the origin of everything, the beginning of time. From Chaos sprang forth three primordial deities, Gaea, Tartarus, and Eros."

Ancient Greece and its mythology is truly a marvel of history...one that has stood the test of time.

Greek myths were more than just stories and epic tales. Take a deeper look, and you will uncover the lessons, philosophies, wisdom, and even warnings that these myths taught. In truth, they are still relevant to this day.

Everything you need to know about ancient Greece and the Greek mythology is neatly wrapped up in this book.

Throughout your listen, we will not simply rehash the ancient Greek myths of the time, but rather uncover the context and background behind these myths and the ancient Greek world. We want to make sure that you cannot only enjoy these fascinating myths but understand what they were like when they were told thousands of years ago.

All the secrets of one of the most fascinating civilizations the world has ever known lie within this audio.

Inside, you will discover:

Join us on an adventure to discover the path of Greek mythology, and learn what life was like in ancient Greece in this book.

Explore the origins of ancient Greece, its gods and the famous battles of greek mythology through this audiobook. Educational audiobook as well as entertaining.

This is a great overview of the Greek culture overall and it's nice that the Greek gods and titans were also included as a part of its content.

Learning about the Greeks past, their folklore and culture have always been interesting. Good audiobook about the ancient Greece.

narrator needs to pronounced names properly or am I missing something. just want how he pronounce names is correctly???

I love that this book has a lot to offer. I love learning about history and exploring ancient Greece with this audiobook is quite fun and insightful.

History of the greeks

Learning the history of the greeks with this audiobook is fun. I love the content. I’m completely impressed and satisfied.

For those who love mythologies

I enjoyed this audiobook. Nice overview of the Greeks as a whole. Explained a lot of things that I did not know about ancient Greece and its people.

I have read a lot of history and mythical audiobooks and I can say that this one can beat them all. Refreshing to start with learning about the Greeks. I would recommend this audiobook, definitely.

This is overall a captivating and excellent audiobook to learn about the ancient history of the Greeks. It is well explained so the reader and the listener won’t have a hard time learning from this. Superb audiobook.

Quite insightful and informative. Gives a lot of the Greek’s historical information. Love the part where it tackles the 12 lessons from the laborers of Hercules. Recommended for mythology and history lovers.

This is a great reference to learning the history of the Greeks. It was difficult to find a compilation of ancient Greek information and background and I’m glad that this one provides the necessary information.

Overall informative and excellent. I personally love it when it talks about ancient Greece origins. This audiobook is a must-have if you love to learn history.

I love this audiobook. It gave me a good understanding of the Greek’s historical background, the Greek gods, and the people. Well written and well narrated.