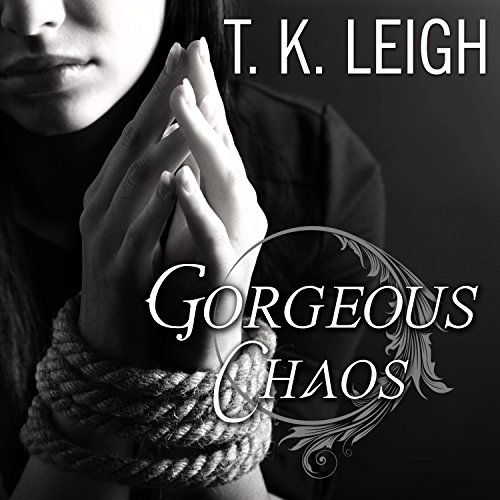 Finally able to face her fears of abandonment, Olivia Adler begins to prepare for the next phase of her life. But Alexander Burnham is still holding on to all the secrets about Olivia's past, trying to protect her. As days go by, Olivia is slowly starting to remember her past, and Alexander realizes that it's only a matter of time before she puts all the pieces together and figures out who he is…and who she is. But if she remembers, her life could be in even more danger than it already is, and Alexander cannot have that happen. When shadows of Olivia's past threaten not only her life but also those around her, will Alexander finally put Olivia's needs ahead of his? Will she be able to put all the pieces of her past together in order to save her own life and those that she's close to? Can she figure out who she can trust and who is threatening her very existence?

What listeners say about Gorgeous Chaos

They've been through Hell and it's only going to get worse in this emotionally-packed, messed-up, tangle-filled drama Olivia and Alexander find themselves in when the shocking secrets that Alexander has rightly or wrongly withheld. But they slowly get revealed leaving Olivia dazed, shocked and heartbroken..... sadly, more than just once.

Meanwhile the mysterious enemy is laying his evil trap by recruiting the help of the greedy and the spiteful and when his trap is finally sprung we get to see just who the mastermind behind the terrible web of lies and deceit is..... and what a mouth gapping shocker that was.

It's got so much heartache and angst but there's also buckets full of sex, suspense, twists/turns, passion, romance and edge of your seat nail-biting tension when things take a bloody, dangerous and vile turn. Told from various POV's but mainly the H/H's and the Narrator did a wonderful job in injecting all the necessary emotions that every bitter-sweet scene called for and brought to life each character.

Worth a credit? This isn't an easy listening, lovely, feel-good, sweet romance.... no it's a cruel, brutal and emotionally draining listen. It's also a well-written, heartbreakingly intense plot about love and betrayal so when these two lovers get their much deserved HEA ending all you can do is sigh with relief that their tumultuous love story has reached it's beautiful end. A non-stop listen and a credit well used.

Not worth your time

If you are into immature winey female that while throwing tantrums state that they are adults and should be treated as such this book is for you. This book could have easily been cut in a third and still would have been too long. It's just the same irritating story over and over again. If you are waiting for Olivia to grow up and for the book to finally turn the corner and get better you are wasting your time.

The narration was good. See my review of Book 1 for more detail.

Book 3. Alex is still keeping secrets. For MONTHS. Even after being advised, warned and even subtly threatened to spill ASAP or lose everything. The repetitions of 'I want to tell her the truth right now…. weeks later….I should tell her the truth… weeks later….Alex, you need to tell her……. weeks later…..Maybe I'll tell her….etc.' are just obnoxious at this point. Alex and Olivia are both as dumb as a box of hair. I now hope they stay together because they deserve each other. I just hope they don't have kids. With 2 sets of total moron DNA, they'll just end up politicians. Seriously, Cam and Chelsea dodged bullets with these idiots. Simon is back in play, and I'm considering rooting for him to succeed. The public music therapy sessions at the pub are absolutely ludicrous----like bar patrons are just SO interested in how Olivia feels. ("Hey guys, let's go to that bar where that whiny chick brings everybody down all the time," said nobody…ever.) The ridiculously hot, rich supposed "psychiatrist" doesn't recognize that Olivia is an unstable waste of skin and is inexplicably unable to move on when he can have anyone he wants? C'mon! He barely knew her prior to "falling in love" with her.

Whatever..there are just SO many "I call bullshit" moments in this trilogy. Does Alex man up and tell the truth prior to it being revealed by someone else? Of course not. Does Olivia handle the truth like a grown up, or even a mentally stable human being? Of course not. Do I want to track down the author's less-than-stellar editor and explain the difference between "infer" and "imply" prior to yelling at her for wasting hours of my life with this unnecessarily long, meandering, babbling, horrifically draining story of 2 incredibly useless people, complete with cliffhangers? YES! (Bumping to 2x speed just to get through with 6 hours left to go. I am proud of my perseverance to have lasted this long at only 1.25 speed.) Holy crap, the narcissistic cow can make even a memorial gathering all about her. Will someone PLEASE put a bullet in her? (sigh) SO…Does it all work out in the end? Well… yeah. I guess so, but sadly, I no longer care.

In the event that I have been too vague, this trilogy was a chore to get through. I, however, do NOT blame the author, and believe it or not, I look forward to future writings. The writing itself is good--there's just WAY too much that needed to be cut and polished for this to be a finished product. This would have been an absolutely stellar single novel IF you cut the entire second book, rewrote Alex to where he grew a pair and was a believable SEAL/security expert and rewrote Olivia to have a small amount of impulse control and to be strong enough to handle the basic struggles of life prior to the last couple of chapters of book 3. Where were the editor and publisher, on vacation? How on earth did they allow this to be produced as is? With a rewrite and some serious editing, this has the potential to be ONE, 12-ish-hour, fabulous, standalone novel. Regrettably, in its current state, it's just a total waste of money/credits and 31 hours of your life.

If you are looking for Drama and uncertainty...this is for you. This book gave my whiplash! The fact that Olivia can go from over the hills in love to hatred in a 10 second period made me be uncertain of what emotion to feel from her.

Would you ever listen to anything by T. K. Leigh again?

No, I will not buy TK Leigh again. Book 1 was intriguing but book 2 and 3 were repetitive craziness.

The narrator was okay but I felt like the author thought I was stupid. Repeating the same things over and over just makes me want to fast forward. I ended up putting the book in a high speed read to get it over with!

What character would you cut from Gorgeous Chaos?

an amazing ending to an amazing series. so sad to have it end.... for now! Anadelle Waters does an amazing job bringing it to life.

This is a review for the entire trilogy.

Stupid descriptions...like someone giving an "irritated yet contrite look"...wut?
Unrequited love? check.
"big plot twist"? check...although I saw it coming.
Unrealistic bad guys? check. They were so one-dimensional.
CIA guys, navy seal guys, everyone is filthy rich so the story doesn't really have to take into account that they should GO TO WORK and can't spend all day in bed? check.
This female lead is rather unlikable. I can't even figure out why ALL the guys in the book fall madly in love within a day of meeting her. She is a semi-functioning alcoholic who whinges and whines about EVERYTHING despite regular therapy.
Amnesia? check.
Repetitive sex scenes? check. (even if what some of what they do isn't "vanilla", by the time you've heard it for the FOURTH time, it becomes rote...also? Author needs to find a word other than "undone". I got SO sick of hearing that one.)

***spoilers****
Faked deaths? check.
Implausible motivations? double check. Like...she leaves him because she's protecting herself from having to live without him...?
Utter stupidity? quadruple check. They JUST got back together for the third time and she realizes mid-coitus that she forgot to take her birth control and they decide together that he should come inside her.
People are trying to kill her suddenly for something that happened over 20 years ago because of course they are.
She was pregnant, but she lost the baby when she was raped, shot and repeatedly kicked and then she's in a coma, but at least she no longer has amnesia.

This is not an original work. It's every story line general hospital ever had all in one series (minus the Cassedine weather controller machine from the 1980's)...and I wasted HOURS hoping that it would get better.

The ONE thing the author does well is describing sadness. The narrator was meh.

‘Gorgeous Chaos’ finds Oliver Adler facing her fears of being abandon. She is ready to move forward with the next phase of her life with Mr. Burnham. Alexander is still holding on to all the secrets from Olivia’s past, all in the name of her protection. Little does he know there are enemies in his ring of trust. Olivia is remembering more and more everyday. The more she remembers the more danger she is in.

T.K. Leigh has done an excellent job of holding my interest throughout this entire series. In ‘A Beautiful Mess’ she made me fall in love with the characters. They are very well developed and very relatable. We started this interesting ride that took us deeper and deeper into a very great plot. Then in ‘A Tragic Wreck’ she pulled me further and further into this plot that kept me on the edge of my seat. I was biting my fingernails waiting to see how it all would end. Then I got my hands on ‘Gorgeous Chaos’ ...she blew me away! Excellent series!

This book and series is intended for mature audiences. It is filled with some sexy love scenes, some violence, and mature language. It is however a great series to read. ‘Gorgeous Chaos’ made my mouth drop open, made me want to throw my kindle, and made me say “What the What?! Outstanding! I had my suspicions but it was what I guessed but not to the extent as it was! GREAT BOOKS! I can’t wait for Cam’s Story! Excellent writing T.K. Leigh! Love it!

loved this series, couldn't put it down and even listened in the car on the way home from work

Slow books, seemed like it was the authors first time writing romance or she is young without a lot of life experience.