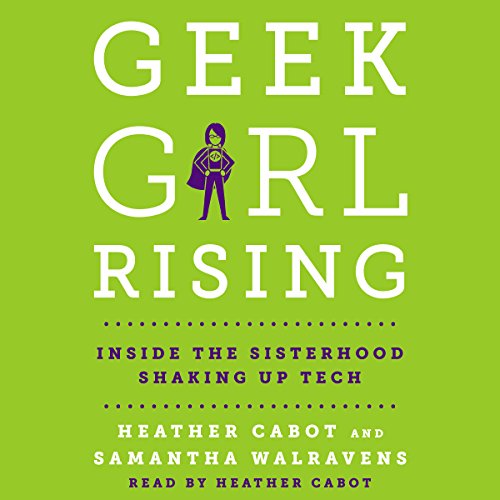 Geek Girl Rising isn't about the famous tech trailblazers you already know, like Sheryl Sandberg and Marissa Mayer. Instead veteran journalists Heather Cabot and Samantha Walravens introduce listeners to the fearless female entrepreneurs and technologists fighting at the grassroots level for an ownership stake in the revolution that's changing the way we live, work, and connect to each other. Listeners will meet Debbie Sterling, inventor of GoldieBlox, the first engineering toy for girls, which topples the notion that only boys can build. They'll get a peek inside YouTube sensation Michelle Phan's ipsy studios, where she is grooming the next generation of digital video stars while leading her own mega e-commerce beauty business. They will sit down with Tracy Chou, former lead software developer at Pinterest, whose public urging in 2013 helped push Silicon Valley tech giants to reveal the tiny number of women in their ranks, propelling the "women in tech" conversation to front pages. They will tour the headquarters of The Muse, the hottest career site for millennials, and meet its intrepid CEO, Kathryn Minshew, who stared down sexism while raising millions of dollars to fund the company she cofounded. And they will journey around the country to meet a new crop of female investors, including Theresia Gouw and Kathryn Finney, who are infusing women-led tech start-ups with much needed capital.

These women are the rebels proving that a female point of view matters in the age of technology and can rock big returns. At a time when women hold 26 percent of computing jobs in the United States and make up a tiny fraction of the entrepreneurs launching new tech companies, these stories shine a light on new role models who prove that in the fast-moving innovation economy, there is a place for anyone who has a big idea and the passion to build it.

They tell the stories of many women such as Michelle Phan, creator of the e-commerce cosmetics company Ipsy, and Tracy Chou, a software developer at Pinterest. The authors also told the story of female “angel investor” Joanne Wilson who invests in women developed and owned businesses. The authors also have made a point of writing about minority women.

The book is well written, researched and organized. The authors cover failures as well as success. I felt the book focused more on female entrepreneurs instead of engineers, mathematicians and other STEM scientists. As a scientist, I was not the least interested in reading about what someone wore to the interview. I think the title of the book should have been Women Entrepreneurs instead of Geek Girls. I think the target audience of the book was high school girls. The overall presentation of the book was one of optimism and encouragement.

loved it! inspiring stories of women changing history, breaking tyre glass ceiling and how we can all be part of the change.