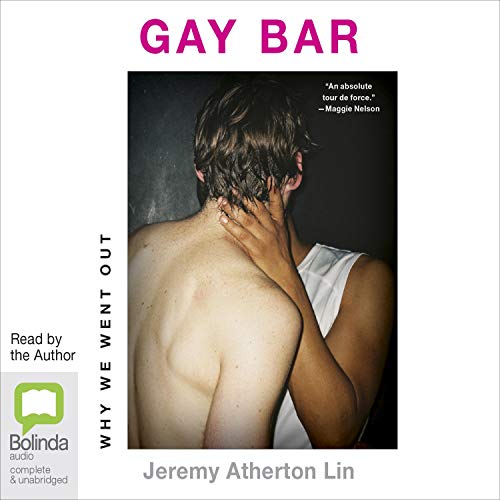 Gay Bar is a brilliantly evocative fusion of cultural criticism, history and memoir telling the story of the gay bar, arguably on the brink of extinction.

In the era of Grindr and same-sex marriage, gay bars are closing down at an alarming rate. What, then, was the gay bar? Set between Los Angeles, San Francisco and London, Gay Bar takes us on a time-traveling, transatlantic bar hop through pulsing nightclubs, after-work dives, hardcore leather bars, gay cafes and saunas, asking what these places meant to their original clientele, what they meant to the author as a younger man and what they mean now.

In prose as exuberant as a hit of poppers and as dazzling as a disco ball, Atherton Lin conjures the strobing lights and the throbbing music, the smell and taste of tangles of male bodies, the rough and tender anonymous encounters, the costumes and categories – twink, top, masc, queen, tweaker, tourist, voyeur, exhibitionist – all the while tracking the protean aesthetics of masculinity and gayness. Along the way, he invites us to go beyond the simplified gay bar liberation mythology of Stonewall and enter the many other battlefields in the war to carve out space in which to exist, express and love as a gay man.

Elegiac, sexy and sparkling with wry wit, Gay Bar is at once a serious critical inquiry into how we construct ourselves through the spaces we inhabit and an epic night out to remember.

"One of the best writers I've encountered, remaking the world sentence by immaculate sentence." (Olivia Laing, author of The Lonely City)

"I can’t remember the last time I’ve been so happily surprised and enchanted by a book. Gay Bar is an absolute tour de force." (Maggie Nelson, author of The Argonauts)

"Jeremy Atherton Lin's personal history of queer nightlife is shot with vibrant intellectual adrenaline. With keen original insight, he celebrates the gay bar as a site of ribald, sensuous, and urgent resistance. A must-read for all." (Cathy Park Hong, author of Minor Feelings)

What listeners say about Gay Bar

A wonderful connection with queer culture and how we got here - highly recommended.

Well reeearched, academically bent personal memoir. Rather too downbeat for my taste.

I’m ten years older than the author, and covered a lot of the same ground physically and culturally, intellect Italy even. But. It emotionally. I loved my time in the bars, I got a handle on my sense of my self, I don’t suffer from self loathing born of Puritanism.
The book is large enough and broad enough to aim to be a definitive guide to the culture of the gay bar, it’s reality, it’s value or otherwise etc. but I suspect that the academic approach, whilst giving the work credibility, is the authors long embedded strategy for maintaining distance from what he is both drawn to and disdains. The gay bar and the associated sexuality focused life. This would explain the complete absence of joy. This author just can’t get over his ‘sin’. And intellectualising it helps him feel superior to the rest of us who he sees as oblivious. Ok, but many of us simply had a fun time, often. The absence of joy shows that despite the academic approach and intellectual pretensions, this is actually a personal memoir, not a definitive guide. Too narrow a lens is brought to bear, everything through the eyes of this North America, self described ‘other’.
I stuck with it because I was curious as to how he would describe a world I dipped in and out of during much of the same period. But it’s hard to recommend because hist take is so dreary. It’s not incorrect, I recognised a clear eye on many tropes, and that academic bent shows it’s value in evidencing many of his points. It’s just very narrow. It’s real but it’s just one take and there are others that are equally real and true and leave a very different taste.
The only area I can really take issue with is his deprivation of gay Blackpool as some hotbed of fascism, where I think his US experience Lee him to misread the signs dangerously. But this is a writer who slyly describes a gay bar in Blackpool, perjoratively, as ‘very caucasian’. Blackpool isn’t demographically London or SF, and this point of view is not supported with any real evidence. Probably an important future historical resource. But a depressing read and an individual take.

I just couldn’t really get behind it but I understand the intentions of the author.

loved it , I learnt so much about gay history and the gay bars x