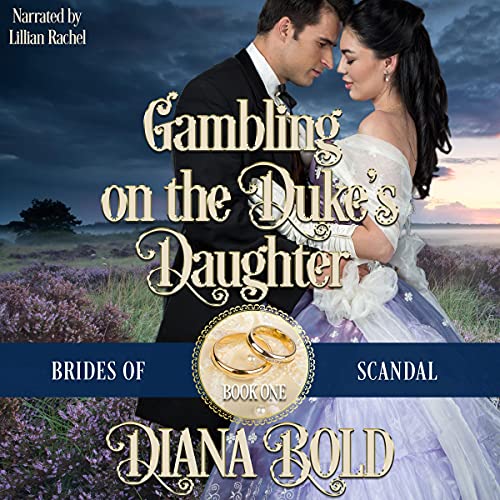 Gambling on the Duke's Daughter

By: Diana Bold
Narrated by: Lillian Rachel
Try for £0.00

Captain Dylan Blake has spent the last decade fighting for his country. Desperate for a little peace, he sells his commission and returns to England but soon finds himself angry and adrift in London Society. When an old nemesis challenges him to a wager - he must get Lady Natalia Sinclair to dance with him twice in one evening - he is willing to play along.

The daughter of a duke, Lady Natalia Sinclair fears her enormous dowry is the only thing that draws her many suitors. But heroic Captain Blake seems different. Unfortunately, she soon realizes his smile is false, his interest superficial.

Dylan sees Natalia's rejection as a challenge, and the stakes increase when he discovers his elder brother Michael is wooing the duke's daughter as well. Passed over for Michael too many times, he's determined to prove he can be first in somebody's heart.

As the lines between the wager and attraction blur, can Dylan and Natalia find the courage to take the biggest gamble of all - love?

What listeners say about Gambling on the Duke's Daughter

I always love an old fashion book. One with balls and escorts and men who are gentleman who have to court a lady and win their affection. I'm not particularly a fan of the fathers picking the groom but everything else yes. Natalia Falls in love with the captain because of his career in the military and everything she read about him. Captain Blake is only after her because of a bet, at first. Then he realizes she's different and the things she makes him understand about himself are true. She truly does fall in love with him. But can he get out of his own head and what he thinks she truly wants in order to find true happiness for them both? you will have to listen to find out.

This narrator did a great job. I'm not sure if she is new to me or not but I enjoyed listening to her in this book.

I loved this story!!

Diana Bold knows how to create a rich, layered story, especially under the confines of the societal notes of centuries long ago. This story was such a treat!

Dylan is the second son of an earl- untitled, broke, and trying to find his footing post-military. Natalia is the daughter of a duke- wealthy and eligible for marriage. Dylan makes a wager for her attention, which backfires on him. The question is, can these two people let their walls down long enough for love to grow?

Excellent narration by Lillian Rachel rounds out this wonderful romance.
.

thank you so much for such warm and fuzzy love story. would recommend and also hope to hear more of your books x

This was a lovely story of love, joy, and romance!
I loved Nataliers character, she is how a women in love should act!
I highly recommend this book.

An absolute genius of an author! The creative imagery created by this author kept me spellbound from the first page to the last. She made me feel each and every word. what a story she has spun. I think I will listen once more time or maybe many a time 😁. Thank you

This was my first time listening to this author and narrator so I didn't know what to expect. I was pleasantly surprised. I enjoyed this book all the way to the last chapter. The storyline was different and kept me interested. Loved the characters and their stories. The narrator was very good (that's always a chance you take) however, this one was very good. I recommend this book...now on to book #2 in the series.

Gambling on the Dukes Daughter was fantastic! Diana Bold writes a story that is wonderful, tasteful, engrossing and beautiful. I absolutely fell in love with both Natalia and Dylan. I felt as though I knew them! I loved Lillian Rachel’s perfectly accented smooth flowing narration. I also have to admit to being intrigued by Dylan’s older brother Michael and I’m hoping that his story will be part of what promises to be a wonderful series.

This story is an easy listen with likable characters. The narrator keeps it light and enjoyable.
(Note: It does get a bit steamy)
If you're looking for your next romantic read, this is a good one.

Not a bad historical romance

I have mixed feelings about this book. I felt the h was a very scatter brained. She wanted a dance but then refused because she didn’t like the look in his eye. She was mad and then not. It was just kind of all over the place. The book was still entertaining, just not my favorite.

The narration on the other hand was really great!

War Hero and the Debutant

A crazy wager leads to love. With great characters and a good storyline, it’s a well-written book. I enjoyed the writing as well as the narration.

Dylan, a second son of an Earl and a Regency era damaged military veteran, bets he can dance twice with an aloof Duke's beautiful daughter, only to enter into a very entwined life dance. Predictable but enjoyable.

Excellent story! The characters are fantastic and the plot is perfect. It is a great audiobook to take you to another time and place.

I love titles and nobility of the time period. I loved that love finally wins out. I just took one star away because of the is it for love or duty part of the story. I got this book from a contributor and this is my honest and voluntary review.

Nat will rub you the wrong way; she's off putting

Johnathan was a real wildcard! Who knew?? Nat really put Dylan through his paces-a bit over much for me. What did she want Dylan to do- stand in the stocks at the town square?? She acted like a cold fish. until... Dylan's dad was an evil pain! I'm really glad I read the second book before this one, because Nat is very obnoxious and off putting in this book and doesn't encourage the reader to want more. Read book 2 before you give up. It's worth it. I voluntarily listened to a free copy of this and am giving an honest review. The narrator did a good job.