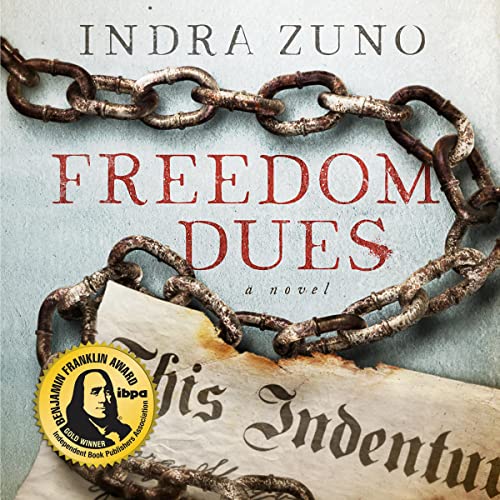 By: Indra Zuno
Narrated by: Sarah-Jane Drummey
Try for £0.00

Blair Eakins is a 15-year-old Ulster Scot living in Ireland under the crushing weight of famine, poverty, and prejudice against his people. In search of a better future for himself and his beloved, he pays for passage to Philadelphia the only way he can: he commits himself as an indentured servant for a term of four years.

In London, 10-year-old orphan pickpocket Mallie Ambrose is arrested for stealing a handkerchief. After experiencing the horror of Newgate Prison, she is sentenced to "Transportation", bound into indentured servitude and exiled to Maryland for seven years.

As Blair and Mallie each endure hellish conditions, their paths eventually cross when they are acquired by the same owner. After Blair steps in to defend Mallie from their cruel master, the two escape and head west, finding unlikely allies among the Delaware Indians. But, as fugitives without rights, they live in constant fear of capture.

What listeners say about Freedom Dues

The action opens up in 1729 when we make the acquaintance of the two main characters featured in this gripping tale of drama, hardships, slavery, poverty, and of course, the power of love. 15-year-old Blair Eakins and 10-year-old orphan Mallie Ambrose struggle living in different and distant places, one in Ireland and the other in Britain, where little price is put upon the lives of the poor or the unlucky.

Forced into servitude, barely surviving the arduous journey across the seas, Blair and Mallie find themselves in the United States and here their paths are destined to cross and once they meet, their lives will change forever!

As I said above, this novel is written with care, love, passion, and respect for people who had to survive through such difficult times as those portrayed here. Clearly, the author did a lot of research in order to document the folks, the times and places in Freedom Dues. The characters feel alive, the places and the events are vividly and explicitly described, while the story is both heartbreaking and uplifting at the same time.

Sarah delivers a balanced performance, switching with ease between Irish, British, Native American, and other accents. She reads in a very pleasant voice and manages to infuse the story with just the right amount of emotion and urgency when needed. I can say that Sarah was the perfect choice to perform this audiobook and thanks to her talent for storytelling and skills with voices and accents, this audio production is elevated to the highest levels of immersion for the listener.

Freedom Dues won the 2021 Gold Benjamin Franklin IBPA Award in the Historical Fiction category and I think that if you are interested in this genre, you will be delighted with what this audiobook has to offer.

Even though I have finished Freedom Dues more than a week ago, I’m sure that Blair and Mallie will stay with me for a long time. That’s how real and alive they felt to me throughout their adventure.
I hope that you found this review interesting and will consider leaving a helpful vote below. Thank you! Take care, stay safe, and don't forget, always listen with your heart.