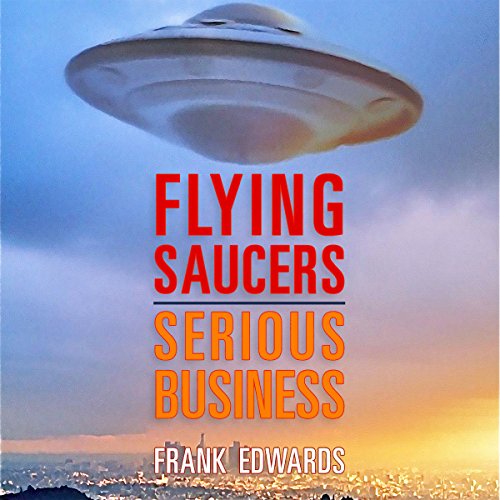 By: Frank Edwards
Narrated by: David Gilmore
Try for £0.00

This uncensored best seller smashes through the barrier of official silence, asking the difficult questions:

In Flying Saucers - Serious Business, America's most popular paranormal spokesperson, Frank Edwards, collates the latest information on UFOs and theorizes about the shocking possible conclusions, including what the next UFO phase might be and its implications for the future of the human race.

Great book, I thought the second half better than the first. Also covered a lot of stories I did not know of. Pleased it did not cover all the main stories that have heard umpteen times before. I did note most of the cases are from the 50/60s,
which was fine. I was also drawn to the fact, a lot of UFOs were tracked coming in at the poles, a fact I had not heard before, and subsequent setting up of bases there to observe them. Or the fact that the US armed forces were ordered not to shot down ufo's only observe from the 60s onwards. I suspect history will consign the scientists of our era to be more backward than the Spanish inquisitors ever were. And the footage of the armed forces denials, its "swamp gas", birds, "you saw Venus, venus is what you saw", clouds, meteorites etc as funnier than a classic episode of Benny Hill. Could be we should
be afraid, and the cover up is correct. But personally, "I can handle the truth", and so can the public, (probably) !

Stays in the past

Very interesting, but never passes 1966, (as far as I recall), so a little disappointing. I dare say this was obvious in advance if I'd looked hard enough.
Little I had not heard before, but well delivered and very "listenable."

really liked this, it will be great to know the truth about this subject

one of best UFO books

one of best UFO books. non sensational, just honest fact s. not too dated considering it was released in the 60s.

I really like eyewitness accounts because everybody is different and therefore the retelling of their experiences are unique. I also prefer this type of book because its like a record of events and so more believable.

I thought I had read everything about UFOs and strange happenings involving UFOs. This book is totally proven me wrong. 68 UFOs in the night sky in Minnesota… I’ve never heard of that. Are you a UFO that turns off the power at a power station and then goes into the sky and blows up… Never heard of that either. This is all things that backed up by fact newspaper articles I witnesses and more. What a great book! This book is on my top three list of best books about you about ever

Everything we know now about UFOs was actually already known seventy years ago. Many well documented cases from the past have just been forgotten and are no longer talked about. This book has them,